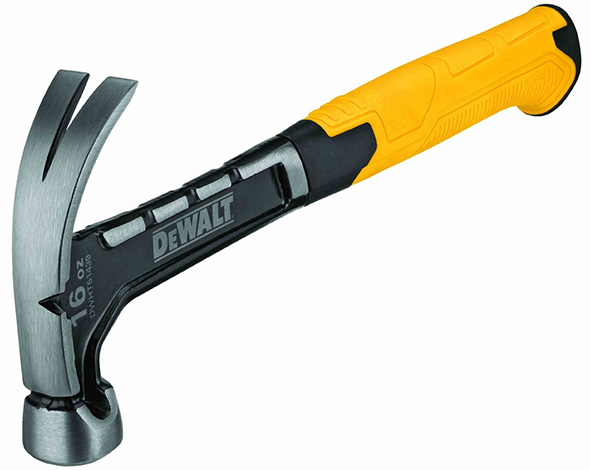 Earlier today, Dewalt announced that they will be expanding their line of hammers with 14 new tools, which will be highlighted by the XP Extended Performance series that offers durability and features including “More Swing, Less Sting” vibration dampening technology, easy-to-grip handles, and side nail pullers.

Featured in their new XP hammers, Dewalt says that their “innovative new grip vibration dampening technology” reduces “sting” by 35%, while improving grip durability by 25%. Footnotes in the press release says that the reduced sting is compared to “1 pc steel general purpose hammers,” and that “based on vibrational analysis, sting is what users feel.” The grip durability improvement is said to be in comparison to current Dewalt hammers.

A “Tri-Pull” feature built into the hammer heads can be used for removing framing nails, finish nails, and staples.

If you recall, Dewalt launched an XP tape measure last year. These new hammers mark, unless I am mistaken, the first expansion of that “Extended Performance” product family.

There will be 8 additional hammers launching at the same time – claw, framing, and specialty hammers, as well as a hatchet. These hammers are said to feature an optimized balance, durability, and functionality.

Looking at some of the new Dewalt product listings, the “optimized functionality” aspect means the addition of a side nail pulling notch to the general purpose and framing hammers.

Here are all of the hammers that are coming out soon:

What does “35% less sting” mean? I posed this question to our Dewalt contact, and they promised to follow up with whatever details the product managers are able to share.

Until then, I’m skeptical, but open-minded.

I’m also curious to learn about which hammers the new Dewalt XP hammers are being compared to. They say “versus 1 piece steel general purpose hammers.” Estwing’s USA-made one-piece steel hammers are advertised as having shock reducing grips. Do those count as general purpose hammers? What about their Ultra Series ($35 via Amazon) with reduced shaft design and also with shock-reducing grips?

What qualifies as a “general purpose steel hammer?” I’m thinking they mean basic steel hammers like their $15 Stanley.

See Also: Best Hammers for DIY and Home Use on a Budget?

Back to “sting,” Dewalt says that “based on vibrational analysis, sting is what users feel.”

“Sting” is not a scientific term, at least not one I’m familiar with, and so I did some background reading. A quick search turns up a few technical papers (mainly on sports science), which describe sting as a subjective measure. It’s “qualitative” if anything. I cannot find any standard or quantitative means that could define or characterize it.

In other words, I don’t know how to interpret “35% less sting” for you, at least not until Dewalt gets back to me.

Reducing vibrations, or sometimes even changing their nature, can reduce the “sting.” But it’s unclear as to what Dewalt did to improve their hammers. Did they improve vibration damping by 35%? That doesn’t seem likely. Did they reduce vibration damping and vibrational characteristics? Probably. But to what extent?

Stanley Black & Decker developed a new handle material for their FatMax Anti-Vibe hammers, and likely refined in the years since. Thus, the new “grip vibration dampening technology” could simply mean that they adapted Stanley’s FatMax handle material to the new Dewalt hammers.

I’ve had good experiences with Stanley FatMax and Dewalt hammers, except for my wood-handled Dewalt hammer whose handle grip decomposed into a sticky gooey mess after I forgot it in a drawer for a few years. (To be honest, I wrapped it in a plastic bag and tossed it into a different box, where it still sits today.)

I like Dewalt’s mig-welded hammers, and it’ll be interesting to see if the new handle style makes them even better.

And, as a reminder, Dewalt recently came out with new carbon fiber composite sledge hammers. It seems that they’re revamping a whole lot of hammer and striking tool SKUs this year.

Pricing for each model is listed above. The XP hammers will start at $26, and the general purpose hammers start at $18 (for the 12 oz).