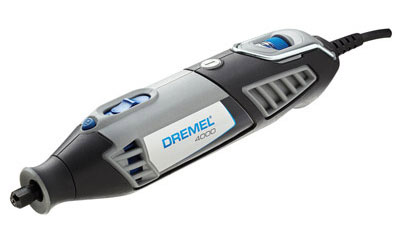 Dremel has released a new rotary tool, the 4000, and it sure looks sweeeeeeeeet! This new rotary tool model is replacing Dremel’s current top-line model, the 400 series XPR.

The new 4000 series rotary tool features a new slimmer body, and while it includes many of the features that we have come to expect from Dremel’s highest performing tools, it also manages to pack in a few surprises.

Some of the more notable features inherited from the 400 series XPR include: a variable speed control, replaceable motor brushes, compatibility with all Dremel attachments and accessories, and a discrete on-off switch.

One of the new feature that definitely caught our attention is an electronic feedback that helps the tool maintain a consistent speed when under load.

Take another good look at the above photo of the new 4000 series Dremel. Now, take a look at following photo of Dremel’s 400 series XPR tool.

It should be quite noticable that the new Dremel 4000 offers greatly improved ergonomics over the 400 XPR. Dremel describes the tool as having a “slim, ergonomic body [that] provides a 360-degree grip zone for comfort and control in any grip position.”

There are several Dremel 4000 kits available, and they range in price from about $75 to $140, depending on the number and type of bundled accessories.

What do you guys think about the new rotary tool? Our first thought: “we want one NOW!”