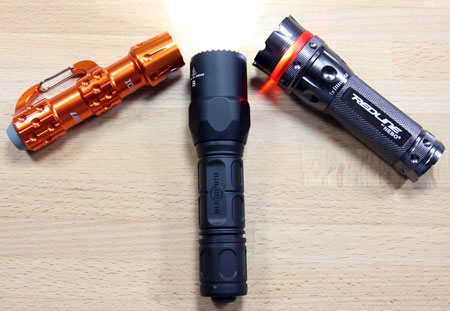 There’s no such thing as owning too many flashlights, as long as you use them! Here’s a brief preview of three flashlights I recently purchased, as shown in the above photo from left to right.

As featured on our OhMyGuyd blog, the Icon Link LED Flashlight sports a built-in carabiner and click-style pushbutton switch. It’s a bit too bulky to clip to my belt, but it dangles stylishly from my bag’s shoulder strap with ease. Its light output is fairly low, but more than sufficient for most day to day tasks.

I came across Surefire’s relatively new G2X flashlight and had to give it a try. Available in “pro” and “tactical” versions, the G2X is heavily inspired by Surefire’s G2 LED but provides a much greater light output. It is important to note that, unlike the G2L and 6PL flashlights, the G2X’s head assembly is NOT removable.

Sometime after Jeff reviewed the Nebo Redline flashlight, I ordered one for myself. While it’s far from being my favorite flashlight, its performance is quite impressive given its modest price. Right now the Redline has 192 reviews on Amazon, with a large majority of reviewers giving it 5/5 or 4/5 ratings. The flashlight is more tacti-cool than tactical, making it a nice consumer flashlight.