ToolGuyd > Power Tools > Cordless > The New Hitachi 36V Cordless Power Tools, Coming September 2018
If you buy something through our links, ToolGuyd might earn an affiliate commission.

I recently wrote about the new Hitachi MultiVolt batteries, but what are batteries without the tools?

Since Hitachi (soon Metabo HPT) won’t be launching the new tools until September 2018, we didn’t have an opportunity to test them out at the recent media. The tools we checked out were either the foreign versions of the 36V tools, or existing tools similar to the new tools that will be introduced. We also saw tools they want to base upcoming 36V tools on. For example, they said the MultiVolt table saw would be based on their current corded version, which was available for testing.

As a reminder, Hitachi 36V MultiVolt tools will not be compatible with their current 18V batteries, as shown in the photo below. The battery will start to slide onto the tool, but it is prevented from engaging the tabs on the tool due to a slight modification of the connector. 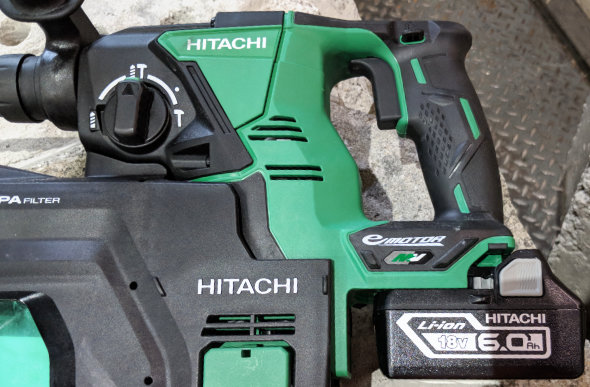 What this means is that you will need new Hitachi MultiVolt batteries to use the new 36V tools, but you should be able to use your existing Hitachi 18V Li-ion chargers. 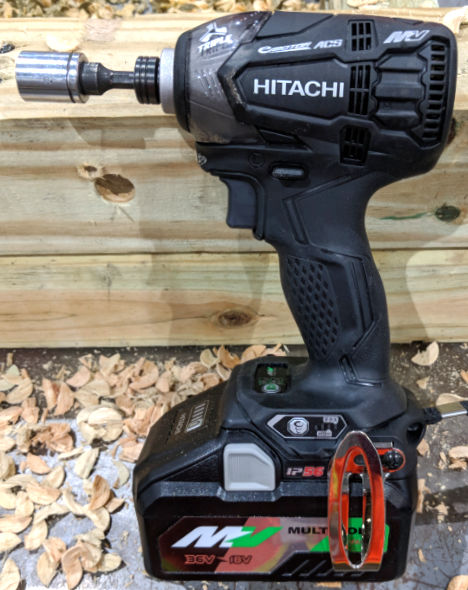 Here is the 36V Triple Hammer impact driver. First, most importantly, I was told it will not be black like the one in the photo above, but it will feature the same color scheme as the current 18V Triple Hammer.

In the demo area, they had both 18V and 36V triple hammer impact drivers to try. One of the tests involved driving some large 6″ GRK-style screws. To be honest I had a hard time seeing any difference in performance between the 18V and 36V versions in this test.

If you look at the spec sheet for the WH36DB, the foreign model already on the market, the max torque is approximately the same (207 vs. 210 Nm). What they are touting as the advantage is that the 36V version will run longer without overheating and won’t lose speed as fast as the 18V as the battery discharges. 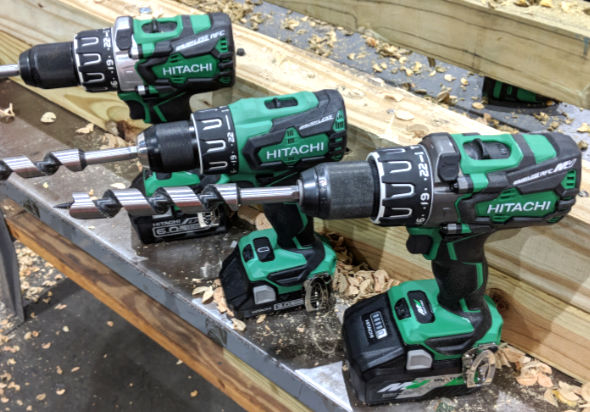 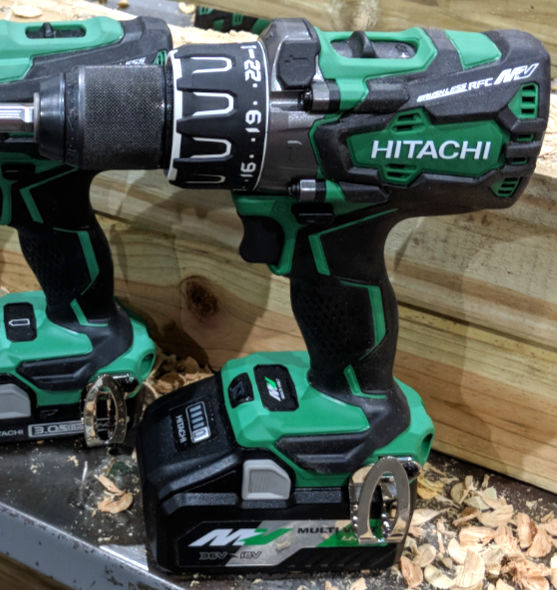 I can’t find any specs on this new drill, but I’ll comment that the 36V drill was definitely able to power through in some drilling situations where the 18V DV18DBL2 Brushless Hammer Drill stalled.

Finally, I’m not sure which drill in in the video below, but you can see the Reactive Force Control (RFC) in action at the end. Hitachi describes RFC in the following way:

If a sudden load is applied to the tip tool and the rotational speed of the motor drops rapidly, the output is stopped before the tool main body is swung, and the load on the operator is reduced. 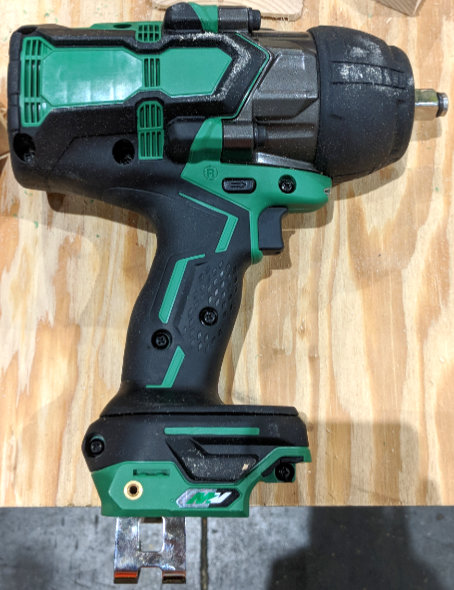 Hitachi will be introducing two 36V MultiVolt impact wrenches, in 1/2″ and 3/4″ sizes. 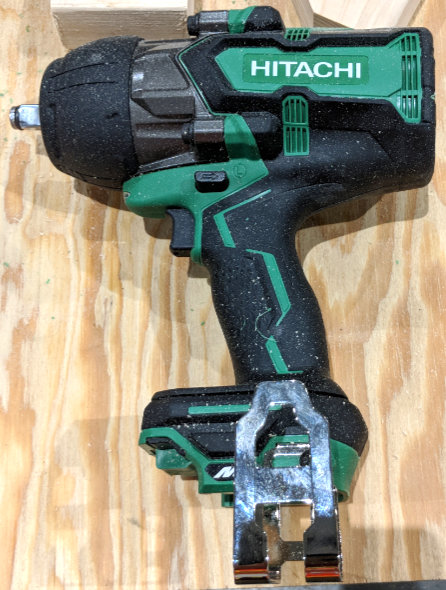 They only had the 1/2″ impact wrench available and no very-high-torque applications for us to test it on. 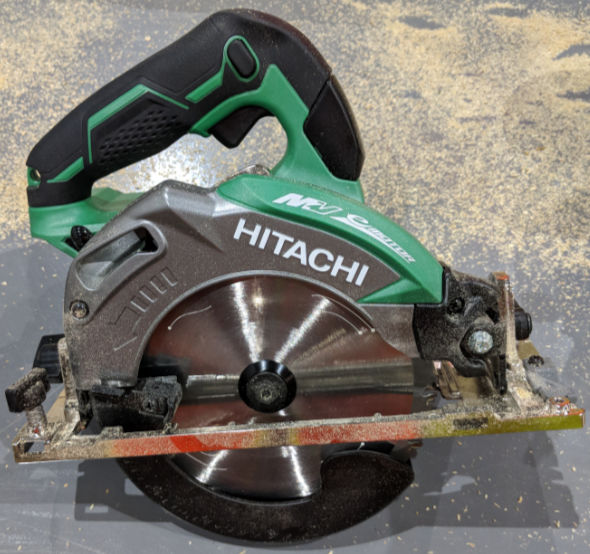 First off, the 7-1/4″ saw is still under prototype, so they showed us their MultiVolt 6-1/2″ circular saw that is available overseas. They said that the 7-1/4″ saw would be based off this saw.

If you watch the video below you’ll see the saw’s “silent mode.” From Hitachi:

The Silent Mode improves motor efficiency, while lowering the noise. The operation mode automatically switches to the Power Mode when the motor load increases, enabling smooth cutting according to cutting conditions.

Credit to Murray Kruger (@krugerconstruction on Instagram) for demoing the saw. 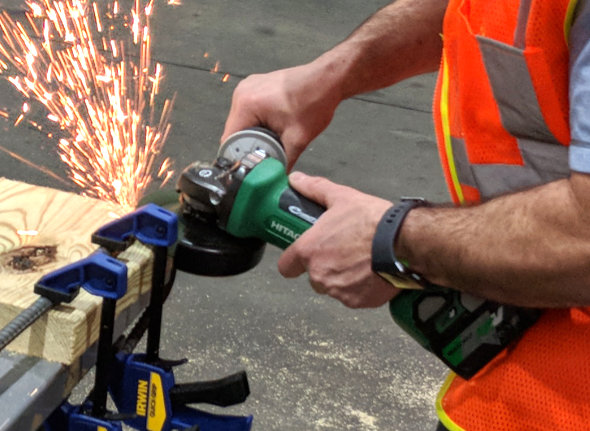 I only managed to snap this one photo of the 36V grinder as somebody was throwing sparks. I’m not sure where it was hiding. Hitachi says that it is a 4-1/2″ angle grinder that also will work with 5″ wheels. It’ll come in two flavors, one with a side locking switch and and the other with a paddle trigger. 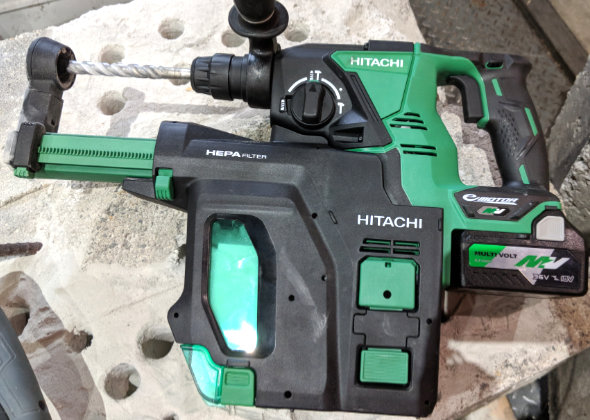 Here  you can see a version of the 36V MV Rotary Hammer that will be released in September. The one released in the US will be a 1-9/16″ SDS Max hammer. 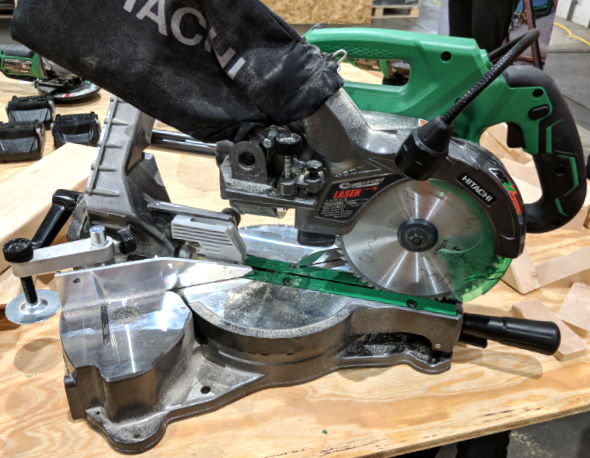 Hitachi did not have the 10″ cordless miter saw ready, so they showed us the 6.5″ (165mm) 4200 RPM miter saw with the laser cut line that’s available overseas. They said the 10″ saw would be based on this one.

It’s a shame that they aren’t releasing this saw here. It was super light and compact, weighing only about 22 lbs. 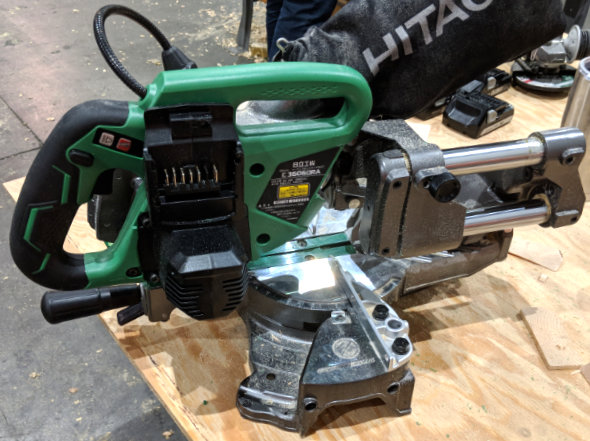 I don’t recall seeing any MultiVolt reciprocating saws on my visit. I could have missed it, but all I saw was an 18V saw and a corded saw. I don’t have much info on this recip other than it’ll have orbital action. 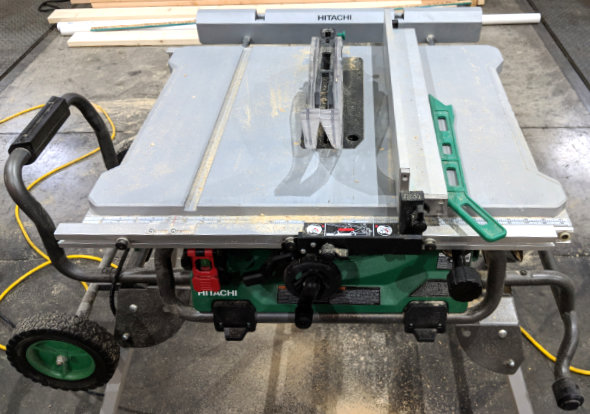 Lastly, there will be a 10″ MultiVolt cordless table saw. It’s due to be released next April, 2019. They said it would be based on their current 10″ corded table saw that was released last year.

What impresses me most about this benchtop saw is that it can rip materials up to 35″ wide (see video below). Let’s hope this feature makes it into the Multivolt table saw.