ToolGuyd > Hand Tools > Screwdrivers > New Klein Demolition Screwdrivers
If you buy something through our links, ToolGuyd might earn an affiliate commission. 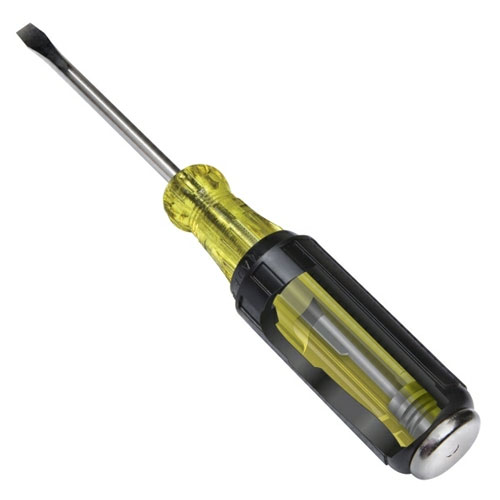 Klein just came out with two new demolition screwdrivers – a 7″ driver with 5/16″ slotted tip, and a shorter 4″ driver with 1/4″ tip*. Both drivers are designed for rough and tough use, and as such they should hold up to occasional prying and chiseling.

A metal strike cap and full-length shank transfers hammer blows directly to fasteners and work surfaces. Press materials also say that electricians can use the screwdriver to bang out knockouts and that utility linemen can hammer these screwdrivers into wood poles to hang tool bags off of.

One thing we don’t like about these drivers is how closely they resemble regular Klein screwdrivers. Some color or styling differentiation might make it easier for the demo drivers to stand out better.

Unless you’re in love with Klein’s cushion-grip screwdriver handles, Stanley and Dewalt’s demo drivers may be a better buy – they’re slightly cheaper and the 2pc set comes with a handy #2 Phillips driver. We picked up a made-in-England set a couple of years ago, before production was sent to Asia, and absolutely love them.