ToolGuyd > Hand Tools > Pliers > New Milwaukee Pliers for 2015
If you buy something through our links, ToolGuyd might earn an affiliate commission. 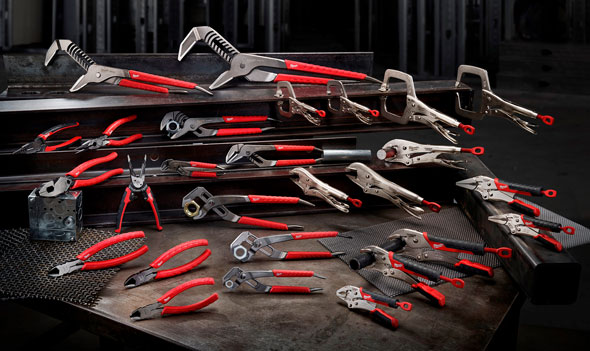 Milwaukee is coming out with quite a few new pliers for 2015. Many of the new releases are redesigns of existing models that are lighter (by up to 30%) and also built with slimmer grips and trade and application-specific features.

We are excited to introduce 14 new, lightweight and innovative solutions that save time and increase productivity for our focus trades.

This is in line with Milwaukee’s tendency these past few years to address specific needs of different users. Consider their torpedo levels, for example – one is designed for plumbers’ needs, the other for electricians.

To start, there will be new straight jaw pliers, with sizes ranging from 6″ to 20″.  These pliers feature partially gripped handles with exposed tips and aggressively ground heads for reaming and even punching applications.

Milwaukee says that these pliers were designed such that the exposed handle ends and reaming head can be used for reaming and cleaning EMT conduit, and for punching out electrical knockouts.

There will also be new hex-jaw/V-jaw pliers in 8″, 10″, and 12″ sizes. These pliers’ jaws are optimized for use on 6pt hex bolts and fastening applications. They also feature an adjustable jaw opening mechanism, which Milwaukee says offers a “best-in-class” number of adjustment positions.

All of these cutting pliers feature Milwaukee’s (patent-pending) reaming head for deburring EMT conduit, and an integrated fish tape puller for wire-pulling applications.

The redesigned 9″ high-leverage Lineman’s pliers feature some of the same features, but also has an on-board crimper for INS and NON-INS terminals. It also sports iron carbide cutting edges for longer-lasting blade life.

The long nose pliers, which Milwaukee says are commonly used in wire pulling applications, feature a full 2″ of gripping surface for hard-to-reach applications.

The new diagonal cutters will be available in 6″, 7″, and 8″ sizes, and are designed for cutting wires in close quarters and for flush cuts.

To succeed in a hand tool market that is already very well saturated, Milwaukee cannot just slap their color and name on good-looking and good-quality pliers; they have to offer something new.

While I personally prefer for general-purpose designs, I think that tradesmen will definitely see appeal in these new pliers. At the least, it might save them from having to track down a separate reamer when the pliers are already at-hand.

What do you think? Do these pliers offer enough to be able to go head-to-head with traditional favorites such as Klein and Channellock, and other brands that have been gaining ground, like Knipex?