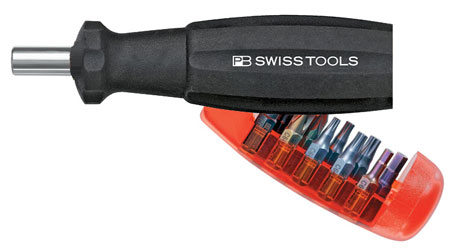 The new Insider 2 features the new magazine style, as well as a universal 1/4″ hex bit holder that appears to be identical to the one found on the Insider 1. PB Swiss took things a bit further with the Insider 3 and swapped in a reversible ratchet module in place of the other Insiders’ universal 1/4″ holder.

It is important to note that the ratchet mechanism of the Insider 3 can be locked in place, presumably to allow users to really crank down on the driver to tighten fasteners without risking damage to the tool.

All three Insider models (PB 6460 family, 6510, and 6510R) feature a comfortable Multicraft handle that I’ve become extremely fond of, and strong magnets are embedded in each bit holder.

I reviewed the original PB Swiss Tools Insider compact pocket-sized screwdriver about a year ago, and am as thrilled with its performance now as I was then.

Don’t worry, PB Swiss Tools isn’t discontinuing the original Insider 1, and as a matter of fact they are now releasing it with a choice of colors – red, black, yellow, and blue. 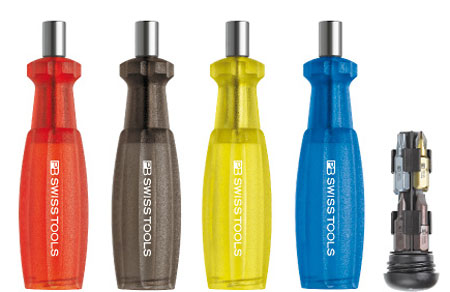 The screw-in bit cartridge of the Insider 1 is not at all unwieldy, but I can see how the new drivers’ flip-out magazines could provide quicker or easier access to the new tools’ bits. In addition, it looks like the new magazines can hold 10 bits, while the original Insider 1 can only hold 8.

We discovered that Count On Tools will be carrying the new Insiders and that they will start shipping in April.

PB Swiss, if you’re listening, how about introducing a SwissGrip version of the Insider. Please?

New Werner 2-in-1 Dual Use Ladders