ToolGuyd > Power Tools > Cordless > New Ridgid Octane Cordless Router, R860443B
If you buy something through our links, ToolGuyd might earn an affiliate commission. 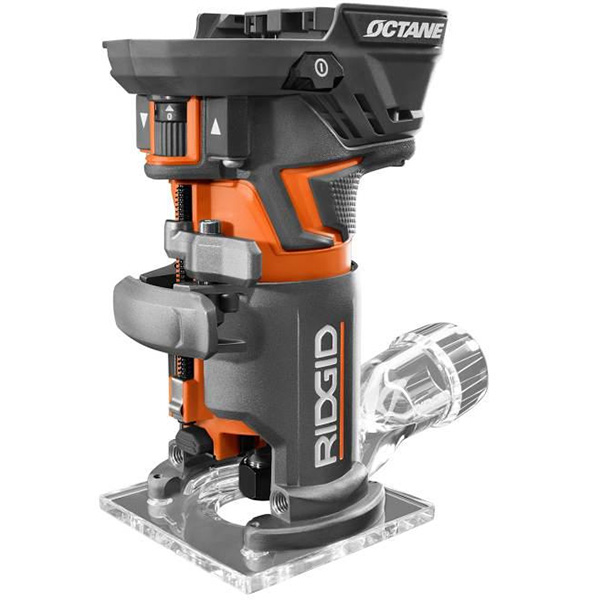 BJ brought Ridgid’s new 18V Octane brushless cordless router to my attention, and so I took a closer look. (Thank you for the tip!)

The new Ridgid cordless router, R860443, is a lot like its predecessor, R86044, but with a couple of key differences.

First, Ridgid says their new Octane cordless router delivers maximum power, intelligence, and performance with 15% more power than the previous unit. They also say that you can expect 15% more power with a longer runtime and a longer tool life. These benefits are only realized when the Ridgid Octane router tool is paired with a Ridgid Octane battery pack.

Another notable new feature is that the Octane router comes with a detachable dust port, which Ridgid says eliminates dust with up to 95% dust extraction efficiency.

Like the other Ridgid cordless router, the new Octane model also comes with square and round bases.

The previous model had adjustable speeds from 17,000 to 25,000 RPM. According to press materials, the new Ridgid Octane cordless router can operate at 0 to 30,000 RPM.

When paired with an Octane battery, the new Ridgid Octane brushless router seems to deliver a little more power. They say you can expect more runtime too, but that could possibly be attributed to the choice of battery, since Ridgid Octane Li-ion batteries offer their highest 18V charge capacities.

If you don’t plan to use an Octane battery, the new Ridgid router should at least still deliver higher RPMs, according to its specs. There’s also the dust extraction port.

Should you buy this? Well, if you’ve already bought into Ridgid’s 18V cordless power tool platform, and were planning to buy the other model, this model is more future-proof even if you don’t plan on using Octane batteries just yet, and still offers some immediate benefits.

If you already own the other Ridgid cordless router, there might not be enough differences to justify an upgrade. If you want that dust extraction port, it *might* be compatible with the older model, and if so, there might be a way to buy it as a spare part. (We’ll be asking Ridgid about this.) Or… everyone could use a second router, right?

Visually, the new router looks identical to the previous model, but with some slight changes in color scheme. Given the differences we are aware of, the changes all seem to be internally, aside for the inclusion of a dust port.

The older model is still worth buying over this one, if you can find it as part of a promo kit. If you recall, the router kit, with a battery and charger, was just priced at $119, which is less than the price of either model in bare tool format. The new model might replace the older one, perhaps when inventory sells out.