ToolGuyd > Power Tools > Cordless > New Huge Ryobi Cordless Fan
If you buy something through our links, ToolGuyd might earn an affiliate commission. 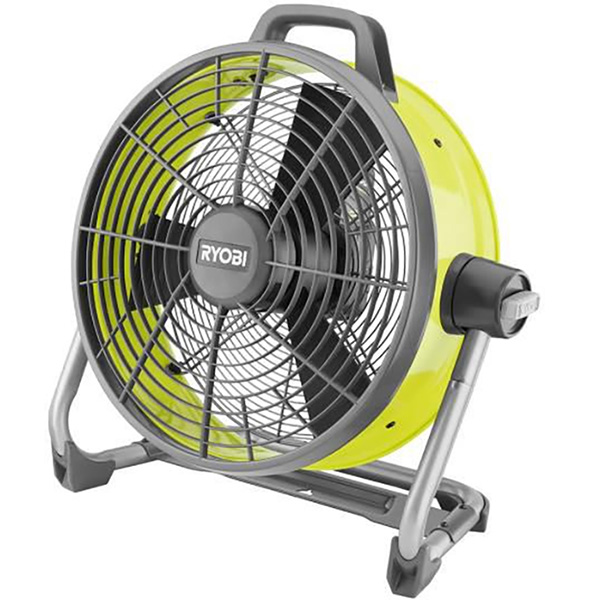 Haven’t seen a bit of mention of these anywhere. Just came across them at my local Home Depot. Not sure how you release the largest, most powerful cordless fan on the market this quietly, but here it is. 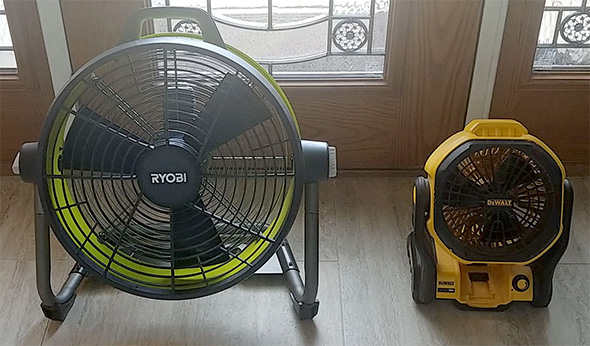 They also sent over a photo of the new Ryobi cordless fan next to Dewalt’s, and the size difference is substantial.

The new Ryobi hybrid-powered Air Cannon drum fan features 220° head rotation range, and can provide up to 2400 CFM of airflow.

It can be powered by Ryobi 18V One+ Li-ion battery, and it also comes with an AC cord for plugging it into a wall outlet.

Ryobi says that it has “quiet air movement technology,” but doesn’t clarify about what this means. I’d guess that it means the fan speed is limited to prevent excessive noise. Larger fans can be slower than smaller ones and still move a lot more air.

The fan can be placed on the floor, and there is also a keyhole-style screw mounting hole in the base for securing it to a wall.

Additional features include a 3-setting speed dial, and adjustment knobs that lock the fan head at the desired angle.

Ryobi advertises that the fan will help to provide comfortable temperatures during power outages.

There’s nothing too surprising about the new Ryobi cordless/corded fan, aside for its size. It’s a 3-speed hybrid-powered drum fan with plastic and metal construction and a logical design.

Ryobi doesn’t mention runtime, but early user reviews claim to get 25 mins with a 1.5Ah battery, and 2-1/2 hours on a 6Ah battery, both at the high speed setting.

It does come with a power cord, and you should be able to source a longer one if needed.

Overall, the Ryobi Air Cannon fan looks to be a decent new release, adding to their vast line of DIY-centered cordless power tools.

Thank you to Moze for the heads-up and for the photo!