ToolGuyd > Awesome & Cool > New Seek Thermal Imagers
If you buy something through our links, ToolGuyd might earn an affiliate commission. 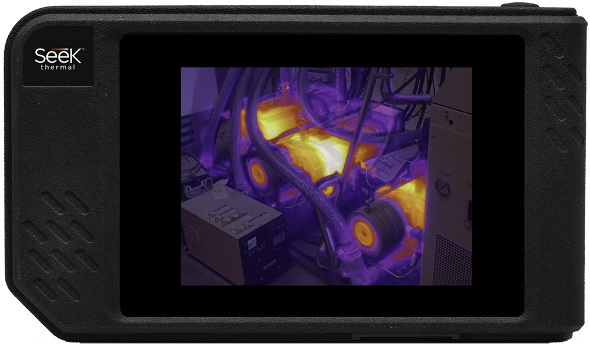 One of the drawbacks of using a thermal imager is that it can be hard to tell exactly what you are looking at. Plus the with small thermal sensor sizes, often less than 320×240, the images can be quite pixelated, further obscuring the image.

Seek Thermal’s new Shot and Shot Pro, have a new technology called Seek Fusion which combines the infrared and thermal images to give you more context in your infrared images.

Below is a short video demonstrating the Seek Fusion technology.

Once you’ve taken the image you can do post analysis right on the device. You can identify up to 3 spot measurements or temperature boxes that display min, max, and average temperature.

The Seek Shot and ShotPRO aren’t available yet, but when they do come out they will retail for $499 and $699 respectively. 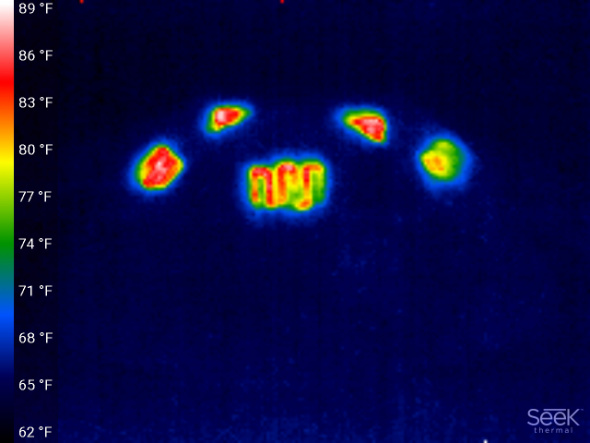 Often times the different temperature gradients of an object don’t match up with the details or outline of an object. For instance can you identify what I’m imaging above? It’s the new Milwaukee Axis mid-layer jacket. There’s no context like the outline of the jacket for you to identify the object. The only thing the thermal camera picks up is the heating coils because the jacket is the same temperature as the table it’s on.

Even knowing exactly what you are looking at, it can be difficult to figure out what part of the thermal image corresponds to the actual object. Often when I’m using a thermal camera, I have to move backwards and forwards several times to even understand what I’m looking at. Having the context of the visual image mixed in with the thermal image is going to make the process of identifying what you are looking for much faster.

The idea of mixing visual and thermal images isn’t new, you can combine the images easily on a computer, or I’m sure some of the really expensive thermal imagers have this capability, but as far as I know this is the first sub $1000 imager to have a feature like this. I could be wrong. (And of course I am, a commenter informed me lower cost FLIR have a similar feature.)

Which one would I choose? It’s not as simple as the resolution of the sensor. While more pixels does mean more detail, the Pro only has 2.4x more pixels than the base model.

What I think is even more important is the field of view. Having used images with both 20° and 36° fields of view, I prefer the wider field of view. Most of the time it’s easier to get closer to the object(s) you are monitoring than father away, especially when you are in an enclosed space. I still find myself having to back up when using the 36° field of view imager, and I can really see the utility in an even wider field of view.