ToolGuyd > ToolGuyd's Tool Box > New Tool Buy: Festool MFT Table from Tool Nut
If you buy something through our links, ToolGuyd might earn an affiliate commission. 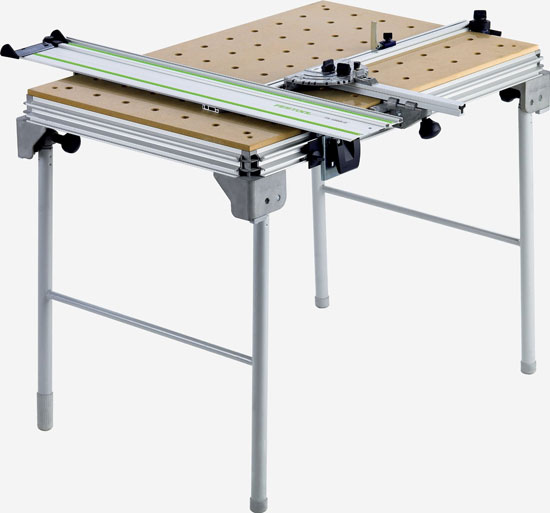 What is a Festool MFT Table?

In a nutshell, the Festool MFT table, or MFT/3 to be precise, is a multifunctional table that is designed to be used with their track saws (such as the new TS 55 Req), routers, jigsaws, and other tools.

If you’d like to know more about the MFT/3, here’s a quick video that shows its basic use. There are plenty of testimonial videos online, and I also plan on reviewing it.

Why a Festool MFT Table?

I have a smaller work area than I used to. As such, there simply isn’t room for a table saw. I *could* fit a portable jobsite table saw in here, but it’s a hassle to move around, store, and use. Plus, jobsite saws are messy. Even with a dust extractor hooked up, dust and debris go everywhere.

My hope is that the MFT will help reduce the hassles associated with using a small table saw and miter saw in my small space. As it is now, there are so many hassles that I avoid certain projects.

I already have a TS 55 track saw that I purchased a few years back, but I haven’t used it in a while. Why? Because I don’t have the space to lay down 2 x 4s when I want to break down a sheet of quarter sheet of plywood. I could find a very long extension cord and try to do things outside, but it’s a huge hassle moving tools back and forth.

A while back Festool sent over a router to be tested in conjunction with their CMS router table, and while I’m not all too crazy about the router table, the router is amazing. I fully intend to use the router and my track saw to build some quick plywood boxes as soon as the MFT arrives.

The Festool MFT/3 looks like it should fold up and store away with ease. It should also be able to handle most of my backburnered projects.

Since I already have a Festool track saw, router, and numerous guide rails at my disposal, the MFT multifunction table is a no-brainer. I’ve known this for quite some time, but today was the breaking point when I finally decided to order one.

Tool Nut has their own website, and mainly sells Festool products via FestoolProducts.com. They’re the ones that supplied the Carvex jigsaw that I am still in the process of reviewing. (I digress, but I’m not very fond of the Carvex. I really prefer using my Bosch, hence the delay in finishing testing for the review.)

Anyways, I gave the folks at Tool Nut/FestoolProducts.com a quick call at about 5:30 pm. They picked up on the second or third ring. I asked if they ship the MFT via UPS or truck freight and they said UPS. I was still on Amazon so I added the MFT to my cart (via Tool Nut) and checked out right then and there.

Actually, Tool Nut is the 3rd party Amazon seller I purchased my Festool track saw from back in 2011. I still remember that my order arrived on a Saturday, and the green T-loc latch of the saw’s systainer was nowhere to be found. I called them up, and they were as friendly as could be. While on the phone I found the latch inside the systainer, so no replacement or spare parts were needed. While I don’t order all of my Festool tools via Tool Nut, that experience left a lasting impression.

I have had issues with damaged and defective Festool systainers from Amazon in the past, and so these days I try to order them from Festool Products or Tool Nut through Amazon whenever possible. I figure that they sell a greater quantity of systainers and are more familiar with them, and so theoretically they know to treat and package them better.

(I ordered my incoming Festool MFT/3 from Tool Nut via Amazon.)

Now, if you excuse me, I have some cleaning up to do. The MFT legs fold down, but not to the size of a stamp. I figure I have 3 days to clear a spot for it.