ToolGuyd > News > Newell Rubbermaid is Selling Irwin and Lenox Tool Brands, Craftsman Reportedly Still for Sale
If you buy something through our links, ToolGuyd might earn an affiliate commission. 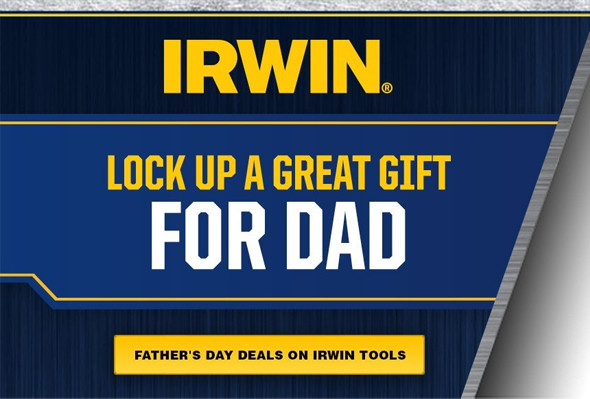 News outlets reported yesterday that Newell Rubbermaid is selling off some of its brands, such as its Irwin and Lenox tool brands. There are several other brand names under Irwin, such as Unibit, Vise-Grip, Hanson, Marples, and possibly others, that I assume will be included in the sale.

It’s unclear who will be snatching up the 2 tool brands, or Newell Rubbermaid’s other unwanted brands.

If you ask me, I think TTI, the company that owns Milwaukee Tool, as well as Ryobi and Ridgid power tool activities in North America, is going to be the most likely potential buyer.

TTI has an incredibly strong relationship with Home Depot, but I don’t think they have any presence in Lowes’ tool department. Lowes and Irwin seem to have a good working relationship, with more Irwin tools popping up on shelves than in past years.

TTI’s brands’ specialties are mainly power tools, but Milwaukee has rather quickly grown their hand tool catalog. Milwaukee Tool also purchased Empire Level not too long ago, and is already helping to churn out lots of new developments and improvements.

TTI also owns the Hart brand, which makes hammers and some clamps, and Stiletto.

Buying up Irwin and Lenox would give TTI presence in a wider range of stores, most notably Lowes, seemingly without interfering with their strong and important relationship with Home Depot.

I’m not certain as to what sort of Irwin or Lenox manufacturing capability TTI could benefit from, but there are some non-overlapping product categories that might be of interest to their other tool brands.

A Bloomberg article mentioned TTI, Stanley Black & Decker, Apex Tool Group, and Husqvarna potentially looking to buy the Craftsman brand from Sears, and suggests that Irwin and Lenox could be possible consolation prizes.

Apex Tool Group? There would be a lot of overlap with Irwin’s hand tools, but I suppose the power tools accessory segment might be of interest to them.

Stanley Black & Decker? I can’t see them wanting much from Irwin and Lenox, at least not enough to justify buying their entire businesses.

Chervon might be a secret player that’s considering both Irwin and Lenox, and Craftsman businesses. I wouldn’t think them to be big enough to buy Craftsman, but they did just buy Skil from Bosch.

I’m sure TTI leadership is considering purchasing Irwin and Lenox, either as a standalone brand, or for under Milwaukee Tool leadership.

Actually, that could also present several additional benefits, if Milwaukee purchased Irwin instead of TTI. Right now, Milwaukee, Ridgid, and Ryobi tools seem to be positioned as best, better, and good, and even though Milwaukee is separate from TTI’s Ryobi and Ridgid power tool efforts, there is evidence of cross-talk between all the brands.

If somehow Irwin ended up under Milwaukee, this would provide the opportunity for “good” and “better” positioning, ignoring the potential for Irwin to continue being prominent in Lowes stores.

This would give Milwaukee and TTI greater exposure to lower hand tool pricing ranges, putting them in position to compete even more fiercely with Stanley Black & Decker.

I could see TTI being interested in the Craftsman brand for the same reason, although most of Craftsman tools are made by outside companies, complicating the sale of Craftsman to anyone.

Stanley Black & Decker, for example, might have a tough time buying the Craftsman brand and selling the tools anywhere. It would take redesigning practically every Craftsman SKU, aside for some of their power tools, such as their Black & Decker-made modular Bolt-On power tools. Otherwise SBD would face having to pay competitors to make the tools for them, as Craftsman has been doing as a private label brand with no manufacturing facilities of their own.

Other companies will have the same difficulty, except for Apex Tool Group, who already makes a lot of hand tools for Craftsman. In terms of power tools, Chervon and TTI make up most of Craftsman’s cordless offerings, and possibly their corded tools as well.

I didn’t mean to digress so far from discussion about who might buy Irwin and Lenox tool brands, and why, but it’s true that Craftsman potentially being up for sale could complicate things.

As for Craftsman being up for sale, that hasn’t been confirmed, but has been discussed as being under consideration.