Have you heard of Norske Tools? A whole slew of Norske Tools power tool accessories popped up on Amazon in recent months. I saw these somewhere recently, and Fred mentioned the brand in my recent post about the Milwaukee Tool acquisition of Imperial Blades.

Norske Tools? I have never heard of the brand.

From their Amazon listings and their website, they make circular saw blades, impact screwdriver bit sets, hole saws, color-coded Torx power bits, insert bits, oscillating multi-tool blades and accessories, and a few other variations of these types of accessories.

What Can We Dig Up?

Their “about us” page doesn’t tell much.

Their Canadian headquarters is a unit in a shared building in Surrey, British Columbia. Their USA distribution center is in Ferndale, Washington, and a web search shows it to be used by several other seemingly unrelated Canadian companies.

A June 2018 shipping manifest details a shipment from “Industrial Supply (Qingdao) Ltd.” to Norske Tools through the Port of Tacoma, Washington.

An online marketplace says this about Industrial Supply (Qingdao) Ltd,:

Industrial Supply (Qingdao) Ltd. is one of the leading suppliers of Machine Tool Accessories, Measuring Tools, Cutting Tools, Woodworking Machines and Woodworking Tools in China. With incorporating some of the most famous brands in Europe (UK, Germany, Italy) and the USA, Industrial Supply is highly regarded and standing for Quality, Innovation and Value. 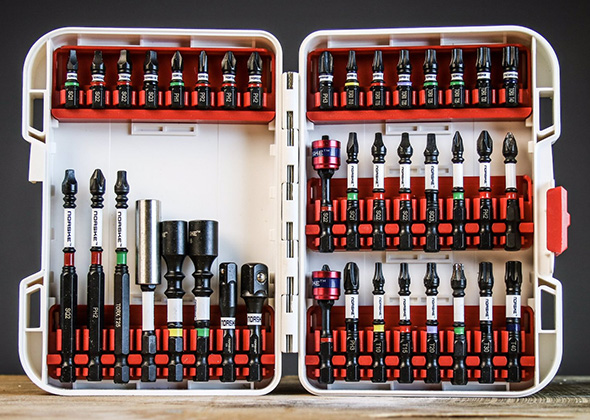 A search for trademarks turns up the viking helmet, shown above, and lists the applicant as Unitek Enterprise Corp, which applications say is based in Belize City.

A search for Unitek Enterprise Corp turns up a patent for a bit quick release mechanism, which lists the name of the inventor, and location given as Norske’s HQ in Surrey Canada. A search for this individual turns up a Linkedin profile, with the person said to be the Quality Control at Norske Tools from January 2016.

There are numerous other folks on Linked in who say they work at Norske Tools, from sales account managers to VPs. The longest-held positions, aside from the inventor listed on a the aforemented patent application, are listed as starting around February 2016.

There’s a 2017 legal complaint between Exchange-a-Blade and Norske Tools over their Trade-a-Blade program. In section 11, it says that Norske was incorporated in November 2015 and by December 2015 it purchased the assets of Sibkis, which had operated a Trade-a-Blade program. They also say that “Norske began selling its products in association with the TRADE-A-BLADE on October 13, 2016.” Section 14 says “Norske entered the market in October 2016 in a RONA Building Supplies store in Elora, Ontario.”

What does this tell us? Absolutely nothing! 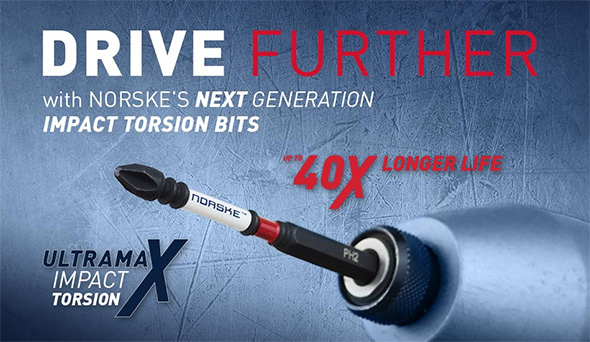 There are no forum posts about Norske Tools accessories that I can find – anywhere. 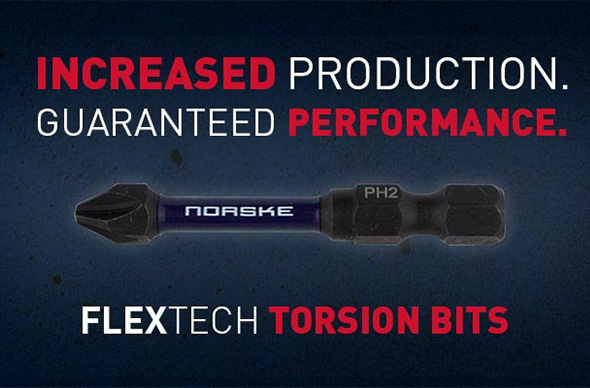 They promise guaranteed performance and legendary performance, and with sharp aesthetics and marketing visuals, I’m automatically halfway convinced to give them a try.

From what I’m seeing – a young company that sprang forth a wide range of products from seemingly nowhere, I would assume that they mainly do design work and contract Chinese manufacturers to produce the tools. Or at least that’s what I assumed before I dug up a little more.

Given that there’s at least one patent application attributed to the company, they don’t quite seem to be “lick and stick” relabeling OEM products that might already be on the marketplace.

The legal complaint I read said that some Norske employees came from Exchange-A-Blade, another power tool accessories brand, also based in Canada. That gave me some more names to look up.

I found a quote from Bob Johnston, VP & GM of Norske Tools in an article from “YardStick” magazine hosted on the Norske Tools website:

With the help of an Asian PTA manufacturer that is backing our enterprise, Norske Tools sells a range of innovative accessories for the non-tradeable (buy new) and tradeable (buy new with trade-in) PTA retail sectors.

He also says that:

The Norske parent company is a PTA manufacturer, which allows us to control quality, innovate, provide better service to our customers through shorter lead times and first-to-market products.

These long-standing relationships have allowed us to share drawings, collaborate on designs, and ensure quality with our state-of-the-art testing facility in Surrey.

All told, Norske Tools is a worthwhile PTA supply option that smaller LBM chains and hardware independents need to look into, to improve their positions against big box competition.

Here’s an unrelated story, but I have a point to it: I was once contacted by an OEM screwdriver bit company that had a USA distribution website, and was asked if I’d be willing to review their direct-to-user impact-rated screwdriver bits. Some other reviewers I talked to had loved these bits, but I was hesitant about whether I should take advantage of the opportunity or not. It seems a little odd to me, to review direct-from-OEM products, as it didn’t seem like something I could easily recommend to readers, even if the bits held their own against products from more familiar brands.

At the time, they said that distribution would be set up through several suppliers, some of which I was very familiar with. I asked some follow-up questions about this, and never heard back.

If Norske is owned by this same OEM company, or perhaps another power tool accessory manufacturer in China, things start to make sense, and good sense at that.

If you made it this far, bear with me for a moment. Here’s an analogy to help you see the way things have fallen into place, at least in my perspective.

Chervon, also unrelated to all this, is a power tools OEM (original equipment manufacturer), whose products can be found under other brands’ labels. Kobalt and Sears Craftsman are two examples. A few years ago, they tried to launch a Hammerhead line of tools and accessories, and although I wouldn’t call that a successful endeavor, they have achieved great success with their brand of EGO cordless outdoor power tools. Now, they’re trying to do the same with new Skil PWRCore cordless power tools, after buying the Skil and Skilsaw brands from Bosch Tools.

Thus, Norske Tools could be likened then to EGO. Or, perhaps to Skil, if you ignore all of Skil’s history prior to their acquisition by Chervon.

If Norske Tools’ parent company isn’t just a manufacturer, but can also work out their own unique designs, which I wouldn’t assume all OEMs can do, it will increase the appeal of Norske Tools’ products, as it could mean unique products.

I’ve seen some new tool brands here in the USA, where I just couldn’t figure things out. Brands like Sonic Tools and Bodivix are hard to decipher. When I started looking into Norske Tools just a few hours ago, I feared that the same would happen, that the mystery would remain.

Why should I buy anything from Norske Tools? Well, that’s a different question to ask. But, understanding what they are a little better, I’m personally at least a little more open-minded than I otherwise would have been.

It looks like Norske Tools has tradesmen and other professional users in mind, which I would assume means a level of quality on-par with other such pro brands. Heck, they might even be made at the same factory as certain pro brands’ offerings for all we know.

Norske Tools also looks to be putting serious efforts into their branding and marketing efforts. Look at the imagery I included in this post, above.

When I started off on my investigative journey – for lack of a better way of putting it – I was extremely skeptical. I’m still a little hesitant, but I’m leaning towards seeing this as an effort by a brand trying to build credibility.

Will they be successful? I don’t know.

I was mainly expecting to discover Norske Tools to be a rebranding-type of operation, and that they simply slapped their name onto whatever accessories they can contract from overseas OEMs. But the truth is far more interesting. It’s an effort by a power tool accessories maker that wants to sell direct via their own brand.

From the article, this is Norske Tools’ motivation:

I’m thinking that there are two potential outcomes. First, Norske Tools could very well remain “that brand that popped up on Amazon that we never heard about before.” Or, they could grow their presence, and five years from now, we’ll be talking about the new generations of Milwaukee Shockwave bits, Bosch Impact Tough bits, and Norske Tools UltraMax bits, and how they compare against each other.

Here’s the catch. I really like the new Bosch impact screwdriver bits, and I am also very fond of Milwaukee’s Shockwave screwdriver bits. It’ll take some effort to get me to try an unknown brand of “industrial” bits at premium prices. What about the average user who doesn’t have the benefit of “editorial curiosity” to provide the extra ounce of persuasion?

Some independent hardware stores are carrying Norske Tools accessories, and now Amazon is as well. They’re going to put more effort into getting their name out.

If by some chance you’ve tried any of Norse Tools’ power tool accessories, what do you think about them? Can anyone provide any additional insights about the brand?