ToolGuyd > Editorial > The Number of Tools I Need vs. How Many I Have
If you buy something through our links, ToolGuyd might earn an affiliate commission. 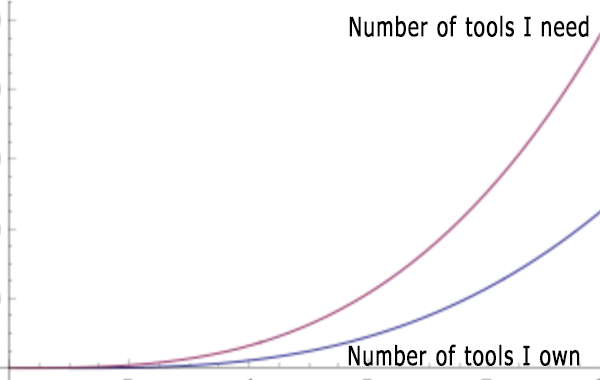 I like to make stuff. Early frustrations led me to become somewhat fixated on doing things “the right way,” which meant getting the right tools.

Much earlier than that, I bought small plastic circles at a local supplier, and I struggled to drill holes perfectly through their centers. I mounted them to servo horns for use as robot wheels. My little robot wobbled a little as it moved. Honestly, I don’t think I’ve gotten much better at drilling holes perfectly through the centers of plastic circles, but I picked up plenty of tricks over the years to fine-polish the results.

I have gotten way better at improvising over the years, both in terms of seeing creative (and safe) solutions and allowing myself to go against my strong habits and personal tenancies.

But should probably have more tools than I do. I bought a couple of “dream tools,” such as my Woodpeckers router table, and a floor-standing drill press, with both crushing most of the project needs and wants I had before I purchased them.

But in addition to the metal-working machines I’ve been wishing for, I’d love for a horizontal band saw, cabinet table saw, and wood jointer. I have a Dewalt planer review sample still on-hand, and an entry-level woodworking band saw, plus a basic dust collector I bought when I convinced myself that *something* was better than *nothing.*

I’ve got big eyes. Jobsite tables saws get me through some projects in the meantime. I try to buy relatively straight or planed-down wood for projects. I have some hand tools for light board flattening, although I still haven’t gotten around to planning or building a solid woodworking bench yet.

It seems that regardless of finally being able to purchase what I want and need, there are always obstacles. Space. Electrical requirements. Space.

Part of the reason I’ve been on a cleanup spree recently is to assess what I’ll have space for. The other part is to make more effective use of the tools I have, with different stations and easily-retrievable bins or tool boxes of like-themed tools and supplies.

Better organization won’t help me close the gap between my current needs and wants and what I have at my disposal, but it’ll be a good start.

I look at benchtop tools every so often, but there are so many compromises. Even before the rise of 3D printers and benchtop CNC routers, brands seem to have stopped caring about bringing good benchtop tools to market.

Back before Sears’ demise, I was at a Craftsman “show and tell” holiday preview event, or something similar, and a product manager was showing me their new line of premium-quality circular saw blades. We ended up talking about benchtop tools, as even then I noticed a decline in selection and quality, and he mentioned that he was hoping to revamp their benchtop drill press and were in the process of trying to find a good supplier.

Sure, you can buy a benchtop jointer, but the consensus of the woodworking internet community is that they’re not very good. I *might* be able to budget for a 6″ jointer, which runs off 110V power, giving me flexibility, but of course the widespread opinion is that everyone regrets their 6″ jointers and wishes they went with 8″ machines to start with. In addition to higher pricing and longer tables, 8″ jointers often have 220V power requirements.

I went with a basic Jet dust collector after being paralyzed by more premium choices over the years, hung up on their space and electrical requirements, and so far it seems to have been a reasonable choice. Maybe I could or should just try a tiny straight knife or “helical style” benchtop jointer before committing to a floor-standing model. But, I really hate buying tools twice.

Trying to figure out where things will go, and acknowledging that some tools might require workshop upgrades, has created decision paralysis for me.

I’m giving myself limits. One cannot have everything or do everything.

But how do I choose between say metalworking or woodworking machines?

I tend to really like using 80/20 t-slot aluminum for workbenches, jigs, and other needs. “But you know you could weld together something made out of steel for cheaper.” Yes, but I don’t own a welder, I haven’t learned how to weld, and even if I checked those two things off the list, I don’t have the space for such activities, not yet at least.

It’s easy to lust after the workshops that some YouTubers have, with some even having enough space for dedicated woodworking and metalworking shops. In theory I could set up an industrial space somewhere, but such investments would likely leave ToolGuyd without the means to purchase tools and equipment I’d want the space for.

I’ll be researching my next piece of equipment, and will likely hold off until my workshop is spotless and empty of everything that doesn’t belong. Maybe I’ll snag a good deal around the holiday season.

Part of the headache with all this is that some tools’ functionality can be duplicated, albeit not quickly or easily. Do I need a cabinet-style table saw? No, I could get buy with other types of saws in the meantime, although having a permanent table saw setup would likely yield faster, better, easier results.

Do I need a jointer? No, but it would make a lot of things easier.

Do I need a milling machine? That might fill more non-overlapping needs, but less often than say a table saw.

When I was younger, I had to pick and choose what I could budget for, growing my tool kit slowly over time. Now, I still have to budget cautiously, but space is a bigger limitation.

I often see people talking about setting up their retirement shops to their liking, but my project list has been growing steadily over the past few years, and I’m nowhere near retirement.

It might seem like I’ve fallen into the trap of chasing “the next acquisition,” and that can be a problem at times, but only once ever few months. More often than that, I run into “darn, I don’t have the tools to make what I need” types of situations.

Smaller tools are easy. The other day a reader gave me the itch to buy a powered desoldering tool, and I expect it to be delivered sometime next week. I don’t plan to use it every week, but it’ll be easy enough to store out of the way between uses. Table saws, jointers, milling machines, lathes, band saws, sheet metal brakes or shears – tools like these have a footprint and command floor space, not to mention size investments.

I won’t let it bother me though. I’ve been cleaning up, and there’s more to do, but it’s been liberating already. I’m going to focus on the things I can do, and not be occupied by the things I need and want but cannot have yet. Still, oh how I wish I had access to a good makerspace or hackerspace.

Does Husky Make the Best Tool Bags? We See Them EVERYWHERE

Ideas on How to Run Holiday Hand Tool Giveaways?