ToolGuyd > Hand Tools > EDC, Pocket, & Multitools > The Olight EDC S1R Baton II LED Flashlight Sale is Too Good to Pass up (Ends 8/16/20!)
If you buy something through our links, ToolGuyd might earn an affiliate commission. 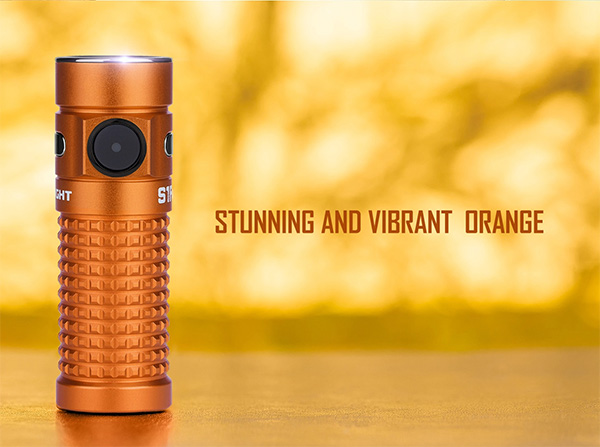 Over at Olight, their Elite Sale is still going strong. I’m not sure why, but the timer on the orange S1R Baton II LED flashlight and deal bundles looks to end today, rather than tomorrow. No big deal, there was ample time for me to be convinced to buy one.

The deal was too good for me to pass up.

I already have Olight’s S1R Baton II LED flashlight, in purple. And one with a special red-white-blue stars and stripes pattern. I am pretty certain I have one in black as well, unopened somewhere.

I purchased a longer S2R Baton II flashlight during one of the last flash sales, and now, the S1R Baton II was back on sale and I wanted another one.

I need to share something with you, for context. I’ve been talking with Olight since May, and discussion of their seemingly once-monthly flash sales starts with a “we’re having a flash sale, which flashlight that’s going to be on sale would you like to try?” I am happy to participate, because these deals are so popular with readers, because it gives me an opportunity to test and vet the lights that will be on sale, and because it deepens my experience with the brand.

Why would I buy another copy of a flashlight I already have access to and have been using? Because it’s amazingly useful.

It’s small enough to be easily portable, but large enough to be comfortable to hold. The rechargeable battery is amazingly convenient. The battery and charging method both require proprietary “customized” components, but the convenience is worth it. It has a double-position pocket clip and a magnetic base that has provided for very versatile use. I sometimes put on a cap and grab the light for a quick headlamp configuration when taking the trash or recycling out after dark.

In no uncertain terms, I love this little light. I also find the orange color of the current model appealing, as it’ll help make the light easier to find.

The S1R Baton II typically sells for $65. At the time of this posting, one retailer has it for $52, another has it for $65 bundled with a free mini light, and Amazon has it at $65 with a 20% clickable coupon that brings it down to $52. That’s for the plain Jane black-finish model.

Now, as part of Olight’s Elite Sale, the S1R Baton II LED flashlight is on sale for $48.97. So, you save a few dollars and also get the freebie keychain flashlight that’s advertised on Olight’s site.

Here’s where things get harder to resist.

Olight also has bundles on sale, where you can get the S1R Baton II plus an i3T EOS in OD green or i5T EOS in purple.

I already bought an i3T and an i5T for review, but was moved by the olive drab green and purple color schemes. I could always use small AA and AAA flashlights in my EDC rotation, around the home, and to give as gifts. I always like giving LED flashlights because they’re universally useful, and these could stand in for the Fenix E01 lights I typically give.

Here’s the pricing for the two bundles:

These deals mess with your mind – and I know they do – but the added bargain is too hard to pass up.

I ordered 2 bundles of each, because I will be giving some lights away, but would have likely ordered either of the bundles for personal use.

With my order topping $200, I will be receiving a free M1T Plus flashlight (2x CR123), as well as the free mini keychain offer. Shipping is free on $49+ orders.

You can refer to my original deal post for info on the other deals and the freebie flashlight tiers.

If only the Olight S1R Baton II were on sale, I might have still bought one. $48.97 shaves a few dollars off the price of the typical black-finish model, and there’s still the bonus free keychain flashlight thrown in if you “share” about the Elite Sale.

But, next month or the month after that, there will be another S1R II on sale, in a different color scheme.

I do like the orange color scheme, but the green i3T and purple i5T flashlights won me over to the bundles.

A splash of color helps make flashlights easier to find on a cluttered workbench or table surface, plus it’s nice to have options other than typical black anodizing.

If you’d like an Olight S1R Baton II rechargeable flashlight, and find the orange color scheme appealing, and like the i3T or i5T flashlights and their current color options, you might not want to let this sale go.

I have been quite happy with my Olight purchases so far, and the samples I have also been using and testing.

If you’re new to Olight, I’d say take it slow and consider one of the S1R Baton II bundles. My short history with Olight has me convinced that if you miss out on one sale, another will follow in a couple of weeks. The S1R Baton II is an extremely popular model, and so we’re bound to see it on sale again, although not necessarily in this “limited edition” color.

For me, the Olight S1R Baton II bundle pricing was too good to pass up. 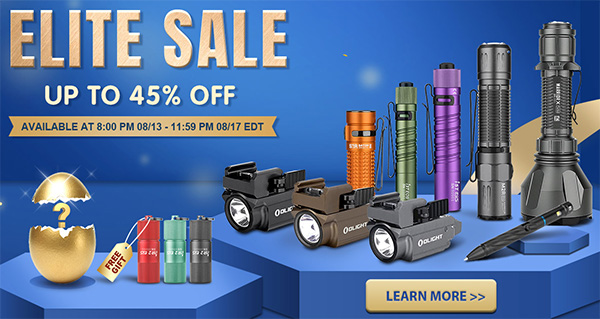 The Elite Sale is mostly over, but you can check out details here:

Here’s our post about the Elite Sale just before it kicked off: