As discussed in an earlier testing overview, Bosch asked us to test and compare several brands of metal-cutting oscillating multi-tool blades. This is not something we do as part of ordinary tool review coverage, so with Bosch funding we came up with a plan to conduct thorough, objective, and unbiased testing.

There were issues along the way, but ultimately we found a test scenario that worked reasonably well.

As mentioned in the outline, the goal of testing was to compare three brands’ oscillating multi-tool blades that are specifically marketed as metal-cutting blades:

All three blades are available for about $14 to $17 each when purchased individually.

The blades were tested in regard to:

Bosch was most interested in speed and ease of use, while I was curious about whether the blades would show different wear patterns. 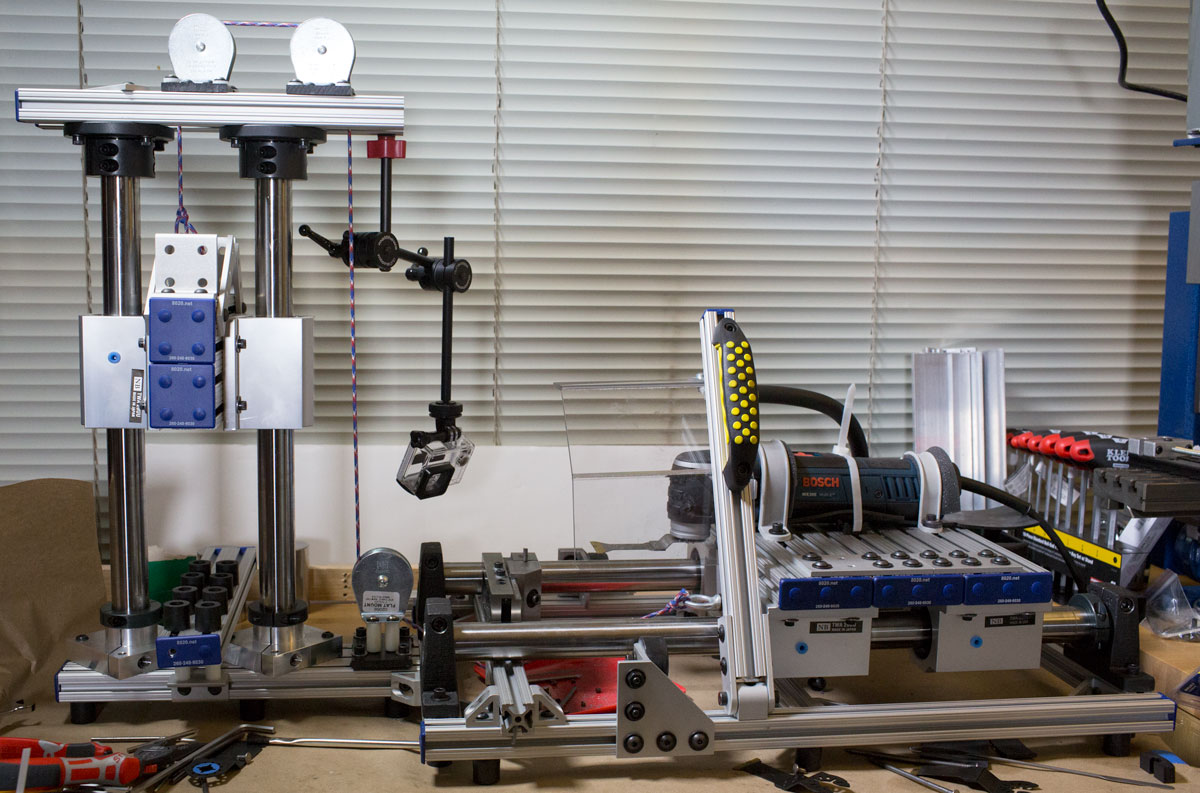 It took multiple apparatus iterations before I was confident testing would be repeatable and completely without bias.

Testing conditions evolved along the way, with the final apparatus shown here. The setup is not as elaborate or controlled as one you might find at a major testing lab or tool manufacturer’s R&D lab, but it’s rigid, controlled, and repeatable enough for me to trust.

1) The MX30 oscillating multi-tool (OMT) is fixed securely in place to a horizontal sled that slides along two guide rails.

Two plastic pipe clamps are used, along with rubber sheeting and medium-density foam. Initially metal pipe clamps were used, but they did not conform to the shape of the OMT well enough.

2) The speed is fixed at its maximum setting.

3) A machine guard with flexible arm is installed to protect tester from projectiles.

4) The OMT power cord is plugged into an AC line splitter and then a power control box with on/off and E-stop.

5) A weighted platform rides along vertical guide rail and pulls the OMT sled with ~8.5 pounds of force.

6) A weight basket is available for placement of additional weights, but this feature was not used.

7) A length of rope (550 type III paracord) was pre-stretched with 50 pounds of tension to ensure constant and uniform tension and is routed over three pulleys and one nylon guide bushing.

8) A 2″ precision vise with V-groove holds individual nails that are to be cut.

9) 16D bright finish nails are used as the test medium.

10) Nails were used for up to 5 cuts each. They were inserted pointed-end-down, and were raised prior to each test run.

11) A current clamp was mainly used for current/power draw measurements during slow tests. Unresolvable and unpredictable software communications disruptions occurred during longer tests, leading to incomplete data. Because of this, current draw was recorded for shorter tests where the software state could be checked prior to each test run.

12) The tool was given frequent rest/cooldown breaks during slower tests.

14) With this setup, the nails were held in place very securely, but in some cases deflecting blades pulled nails upwards slightly. This happened once every 12-15 test runs, and was possibly due to insufficient vise adjustment.

15) The original testing protocol was to take thermal images along the way, but rapid heat dissipation made such images difficult to interpret.

There were a few things I did not consider when designing the testing apparatus.

17) The Bosch blade has a flat cutting edge, while Imperial and Dewalt blades are wavy.

Summary: Changes to the Original Plan

Originally, the plan was to use (3) different oscillating multi-tools to create (9) different tool and blade combinations. Preliminary testing showed that there were no significant differences when different tools are used. That is, if Blade A had a cutting speed of 5 seconds on Tool 1, and Blade B had a cutting speed of 10 seconds, the proportional ratio was observed to be maintained when both blades were used on Tools 2 and 3. Therefore, only one tool was used for all testing. This also allowed for simplified design of the tool sled, as it did not have to accommodate different blade change mechanisms and cutting heights.

Thermal images were abandoned, as the large conductive mass of the vise dissipated heat very rapidly. The initial plan was to cut nails that were embedded in wood, which would have allowed for easier temperature measurements.

Each blade was to be tested (3) times on (20) nails each. Some of the blades were incapable of making this many cuts and failed much sooner.

As it turns out, the apparatus worked extremely well. Except for a few unusable test runs due to the lifting of nails, everything went smoothly.

Initially, I ran a few handheld test cuts and saw that different blades do perform differently, but the observations were much more pronounced when tests were conducted via the test fixture. This apparatus removes the human factor from testing, and becomes somewhat of an accelerated test since only a small section of each blade is used for cutting.

The testing was as objective as could be, but I really want to emphasize that the results are accelerated from what would be experienced when using these blades in real-world applications. Unless you will mainly use these blades to cut nails or other objects in one part of the blade, the performance differences will be somewhat subtler – but they will still be there.

All three brands’ blades are in the same approximate price range, with an average cost of $15 per blade. But, it is important to note that they’re not created equal. The Bosch blade has carbide teeth, while the Imperial and Dewalt blades have bi-metal teeth and titanium coatings.

Bosch funded this comparison testing project. They made it clear that it was not their intent to influence the results in any way, and we were given full control over how the OMT blades were to be tested.