ToolGuyd > Editorial > One Lucky Person Can Save Almost $4 on Pre-Owned Tool Grease at Amazon
If you buy something through our links, ToolGuyd might earn an affiliate commission. 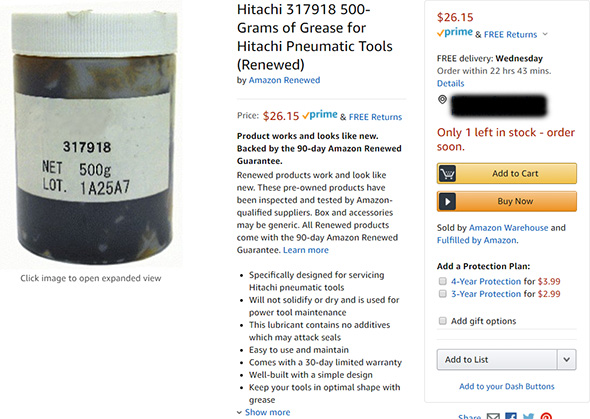 I’ve written about Amazon’s “renewed” products before, and continue to be surprised at some of the offerings.

Renewed products work and look like new. These pre-owned products have been inspected and tested by Amazon-qualified suppliers.

Compared to the “new” listing, one lucky customer can save nearly $4 if they choose the “renewed” product. For everyone else, sorry, they only have one of these in stock.

While I steer clear of used tools in general, I’d think that power tool accessories and consumables such as grease or oil would be especially risky or problematic to buy.

A pre-owned tub of grease?

What kinds of renewed tools or supplies would you buy or avoid on Amazon?

In my tool-shopping experiences, I have yet to be compelled by a “renewed” tool listing. I suppose that if the savings on an item was sizable enough, or I had my eyes on a hard-to-find tool that was only available as “renewed,” I might then give it a chance.

I Gave Ordering from Sears Another Try, and Deeply Regret it