ToolGuyd > New Tools > Oneida “New and Improved” Ultimate Dust Deputy that [Hopefully] Won’t Damage Your Dust Extractor
If you buy something through our links, ToolGuyd might earn an affiliate commission. 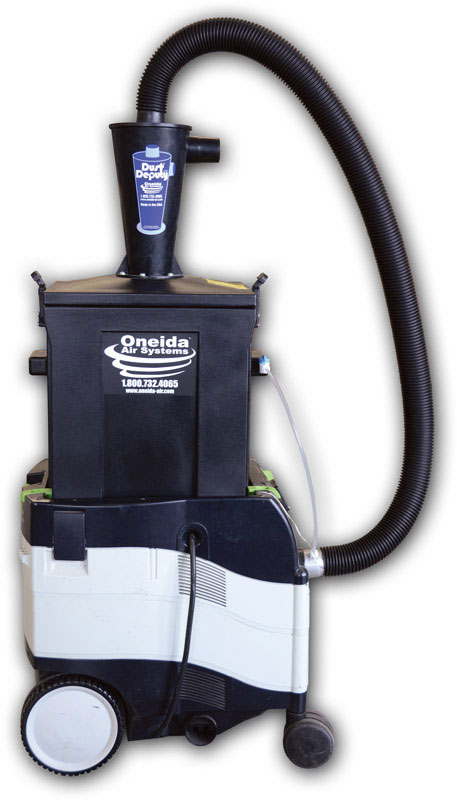 The Ultimate Dust Deputy is designed to attach to Festool CT dust extractors and separates out a lot of dust, debris, and chips before they reach the vacuum. This means longer Festool bag life. The Dust Deputy will fill up many times before the Festool filter bag needs to be replaced or emptied.

I own an Ultimate Dust Deputy, and it SUCKS, and not in a good haha vacuum joke kind of way. It doesn’t actually fit onto my Festool CT 26 dust extractor, as some of the tabs are not quite where they’re supposed to be. When I first tried to assemble the product, the supplied gasket material tore apart. And then when I read up on it, I saw horror stories from other users about how the Ultimate Dust Deputy immolated their expensive Festool dust extractors with static shocks.

I recently went through some old mail and saw a letter from Lee Valley – the place I ordered my Ultimate Dust Deputy from – which said they learned of several incidents where customers’ Festool vacuums were damaged. Lee Valley advised that customers should immediately discontinue use of the Ultimate Dust Deputy and they offered the option of a full refund or free grounding kit.

Since I purchased it in September 2012, my Ultimate Dust Deputy has sat unused. First it was because I had to wait for replacement gasket material, and then because of potential grounding issues. I did purchase a roll of copper tape to help improve its grounding, and anti-static hoses, but I never really trusted it.

So when I saw that the Oneida Ultimate Dust Deputy is new and improved, I couldn’t help but feel a little bitter. The original had quality issues (such as how it could it not attach securely to my Festool vac’s Systainer dock) and was not well thought out in regard to static dissipation, as it proved to be potentially risky to use, making it a $199 waste of space. I’m just happy not to be among the unfortunate users who fried their Festool vacs’ control board circuits due to the Ultimate Dust Deputy’s poor static grounding.

Maybe the 2014 version will indeed be better, and hopefully Oneida will sell the anti-static cyclone separately so that those of us foolish enough to purchase the previous version won’t have to buy a complete new system.