ToolGuyd > Power Tools > Cordless > Oops, I was Using a Milwaukee M12 Fuel Drill in “Hammer” Mode While Drilling Wood
If you buy something through our links, ToolGuyd might earn an affiliate commission. 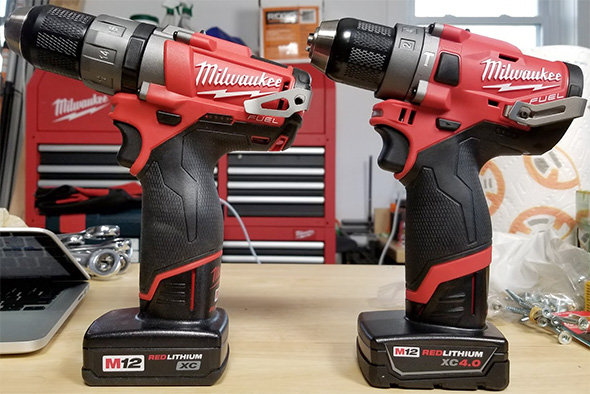 Oops. So, I’ve been using the newest M12 Fuel hammer drill a lot lately, and I didn’t realize it was in hammer mode.

Oh, I felt it in hammer mode. I thought, wow, this is some weird wood. Why is the drill bit plunging forward as it drills across grain barriers? 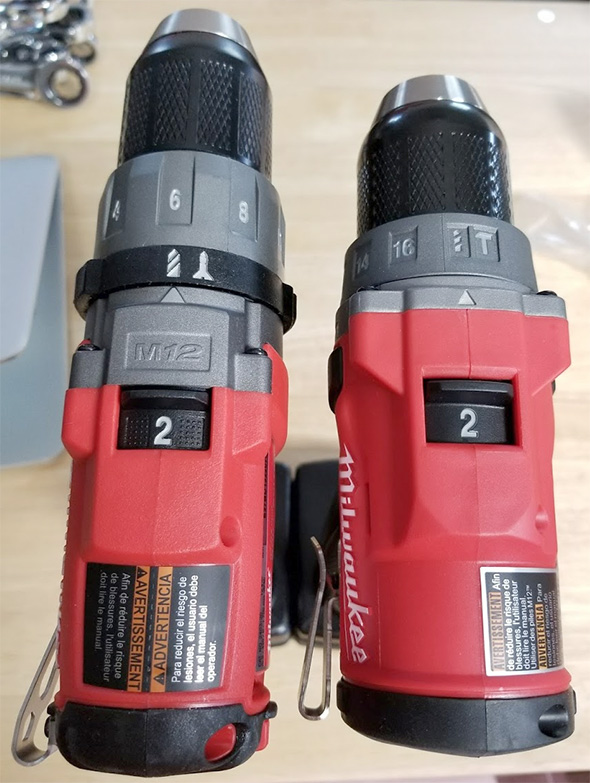 With the newest M12 Fuel hammer drill, shown on the right in the above photo, switching to hammer mode is done using the electronic clutch dial. I’m used to hammer drills with the mode selector elsewhere, as with the previous generation M12 Fuel model. Shown on the left is the previous generation M12 drill/driver. The hammer mode would be on the separate black banded drill/driver mode selector.

For the past couple of projects, I used the M12 drill for drilling holes, and a Hitachi 18V brushless impact driver for driving in screws.

It was maybe the last wood project, on Thursday?, when I could feel the hammer mode. The drill pulsed forward through the wood, almost gently. Maybe the drill bit was getting a little worn, or there were small knots hidden in the wood, or some strangely hardened growth rings.

Nope, the drill was in hammer mode.

I finally realized it when I went to drill through a steel angle, for mounting a power switch box to my router table. I used a transfer punch to mark the hole locations, and then used a center punch to deepen the marks a little.

I started to drill, and the drill bit bounced around a little. What? Why is the drill skating on the material, it’s steel, but not hardened tool steel or anything like that. I started my holes and was using what I felt to be appropriate drilling pressure.

Because the drill was in hammer mode! I switched it back, and then proceeded to drill my two holes.

Later in the day, I used the drill for a quick countersink task, and realized it had again switched itself to hammer drill mode. Argh!

The first time, maybe I had inadvertently dialed past drilling mode the last time I switched from a numbered clutch setting. But I would have noticed the hammer mode during the next few applications and projects. The second time? I guess I wasn’t careful enough in my handling of the drill?

Generally, I have always steered away from hammer drills, unless I know I had some masonry drilling to do.

I probably should have realized what was going on, but I guess I forgot that I was using Milwaukee’s M12 Fuel hammer drill, which was included in a kit with the new impact driver.

Despite this frustration, I do still like the M12 Fuel hammer drill. I like that it’s smaller than the original M12 Fuel drills, and powerful enough that I rarely reach for a heavier duty drill. The 1/2″ chuck has come in handy, too.

I don’t think I’ll ever make the mistake of inadvertently using the drill in hammer mode again, but I also don’t want to have to check the drilling mode all the time.

I’ve been using the M12 Fuel hammer drill for months now, and this hasn’t happened before now. Maybe I ran into a string of bad luck. I hadn’t adjusted the clutch dial in a while. It was only with my recent projects that I started working back and forth between the M12 drill and Hitachi 18V impact driver. I had used the M12 drill back and forth with an M12 impact before, but the recent projects saw the clutch dial untouched for much long spans of time.

So, what’s the point of all this? Well, I can’t be the only one whose drill changed modes on them, right?

I chalk this up to user error. The clutch dial has a satisfying feel to it, and so it’s not slipping because it’s loose. Switching to hammer drill mode is different than on other models, and ultimately, it’s my responsibility to not lose sight of that.

What it comes down is that I forgot that I was using a hammer drill.