ToolGuyd > Editorial > Ordering Bosch Cordless Tools from Europe
If you buy something through our links, ToolGuyd might earn an affiliate commission. 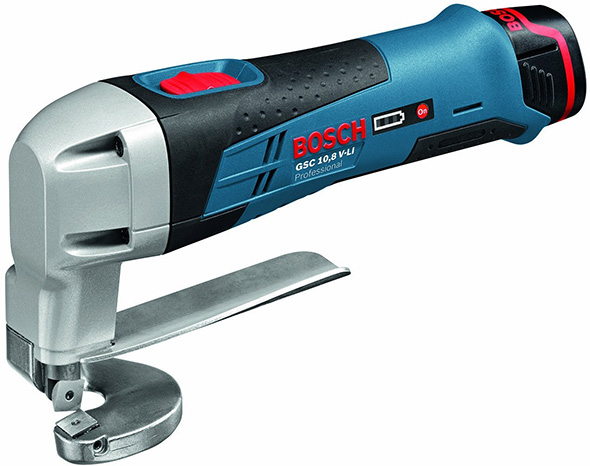 I spotted Bosch’s 10.8V/12V Max cordless metal shear over at Amazon, but the listing seems… off, as if the 3rd party sellers are importing the tool from Europe and selling it here as-is. I certainly haven’t heard from Bosch that they’re releasing this cordless shear here in the USA.

The weird part is that the tool is fulfilled by Prime, at least the listing I’m looking at, but when I clicked through, it said a 4-5 day lead time.

So why not just order it from Europe?

I’ve done this before, a year ago, when I wanted to give Bosch’s 12V Max circular saw a try. It turns out that it’s pretty easy to order tools from Amazon.co.uk, or Amazon.de. I’ve done it a few times now.

When I order tools from overseas that are not available in the USA, I make a few assumptions.

For cordless tools not available here, I assume that there’s no warranty. Shipping something to Bosch in Europe for servicing? In some cases it might be cheaper to just buy a replacement tool. Bosch North America likely won’t service or replace damaged or defective tools purchased elsewhere.

I make no assumptions that the tool meets or passes USA safety regulations. Would a particular tool be OSHA-approved? Certain power tools marketed in Europe do NOT comply with UL and/or OSHA safety regulations, which is why they’re not sold here.

Combination miter-table saw tools come to mind. Certain Festool and Metabo tools have not been released in the USA because they would require substantial redesigns to meet our safety regulations.

It’s not that such tools are not safe, but that they don’t fit the regulations or requirements that are in place, such as in regard to table saw guarding guidelines.

Anyway, what I’m trying to say is that there are inherent risks when purchasing tools from a different market.

For tools sold here but purchased in Europe, I still consider that there’s a risk of being turned down when seeking warranty or replacement service.

In some cases, I have saved a bit of money, even when spending more for Amazon’s faster international delivery service.

You can’t buy everything, though.

Here are some Bosch 12V Max tools you can order through Amazon UK:

And a few that Amazon.co.uk will not ship to the USA:

The main reason for this discussion is because I saw the Bosch 12V Max cordless shear on Amazon.com for $375 and fulfilled by Prime. The model number and 10.8V branding means it was built for the European market. Warranty concerns aside, you can buy it from Amazon.co.uk for as little as $223 with shipping.

I’m not saying you *should* buy tools from overseas, but that you *could*. You really have to weigh the risks and look at the bottom-line pricing.

With cordless power tools, a tool made for one country often doesn’t care whether it’s powered by a battery pack made for the same market or a different one. Chargers are localized, though, and so it’s inadvisable to buy a kit.