ToolGuyd > Power Tools > Cordless > Our Awesome Visit to Black & Decker and Dewalt
If you buy something through our links, ToolGuyd might earn an affiliate commission. 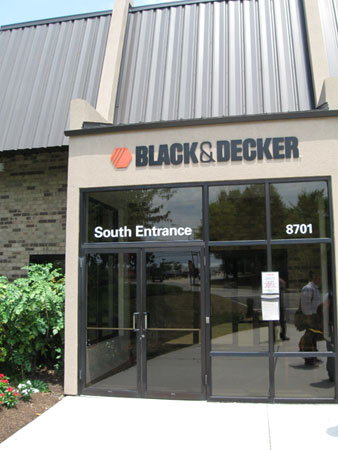 I came back just a few hours ago from Black & Decker University, a facility that is largely used for the training of Dewalt employees and business partners. Along with nearly 3 dozen other bloggers, writers, and magazine editors, I had the opportunity to attend the unveiling of Dewalt’s new 12V MAX lithium ion cordless power tool product line.

I have to say this early on to emphasize its importance. I truly enjoyed my time at the event, and especially the many conversations I had with Dewalt’s development team members. It was just an absolute pleasure chatting with all of them. Not only did these guys and gals have detailed intimate knowledge of the 12V MAX tools’ designs and features, they were very energetic and seemed to be genuinely proud of the new products.

Of course the food at the ballpark was good, but the company was absolutely phenomenal. In addition to the product development crew, there were quite a number of other hosts and attendees, including the incredible PR team that represents Dewalt and a VP Brand Manager.

There was of course an impressive turnout of bloggers and writers, and I had a nice time meeting and chatting with many of them. It was definitely a worthwhile experience to talk with other enthusiasts from both comparable and completely different fields of expertise.

Although I definitely don’t regret it, chatting with the great folks at Dewalt and checking out the new tools at the ballpark really wired me up. Once I got back to the hotel, I found that I wasn’t tired at all. Unable to sleep, I tried to bleed off some of my excitement with a brief preview/teaser post of the 12V MAX launch. I still had a bit of trouble falling asleep, but I suppose that could be considered a good thing.

It happened that some of the Dewalt development team and PR reps saw my preview post. They especially liked the Miller Genuine Draft scale marker. When setting up the tools for a quick pic, one of the Dewalt team leaders suggested I insert something for size comparison, so I used a beer can. What’s more recognizable in size than a 12 oz can?! I’m glad to have been able give them a quick and easy smile!

After enjoying a few breakfast treats, we were given a brief tour of the Black & Decker University facility. Much of the building is devoted to training use, and so in addition to many tool demo stations, there were real world mock-ups and sets.

We then sat though a few presentations that discussed the new 12V MAX tools, their development, and lessons learned from field testing. A great deal of information about Dewalt, its ideals, and its mantra were shared directly and also through their team members’ actions, explanations, and overall attitude.

The hands-on segment began next, and we finally had a chance to test out the tools’ performance. Before being let loose to try out the new tools, we were briefed on the tools’ designs, features, and competitive advantages, and witnessed quick real-time comparative demos.

Most of the seasoned professionals and long-time writers and editors in the room were obviously used to this sort of unveiling event, but some of us were not. Still, you could almost see everyone’s childlike glee as they picked up one of the new power tools for the first time.

In the pic above, I’m testing out the new 12V MAX 3/8″ drill/driver. Before you ask, I know the safety specs are useless when they’re not on my eyes. I left my favorite Dewalt/Radians goggles at home, and so my options were to wear safety glasses instead of my corrective ones, or see clearly. I figured that it would be safer to see clearly.

Also notice the tension in my hand and arm, I am pushing the tool to its limits! Equipped with a 1/2″ spade bit, I was told to lean in and go at it. Other tools (I won’t name names just yet) stalled out while the Dewalt just plowed through.

The testing scenarios were well setup, and seemed to perfectly exemplify the typical situation the tools would be used in. A wide range of competitors’ product offerings were available for comparison purposes, and this really helped highlight some of the 12V MAX tools’ advantages.

Despite how awesome it was to check out and test the tools firsthand, I am itching to try out the new tools in an uncontrolled environment. I want to slap a hex-shanked spade bit into the screwdriver. I want to use the 3/8″ drill/driver to drive large lag bolts. I want to see how well the 12V impact driver compares to a compact 18V one.

A Few More Words About the Event & Disclosure

All in all, I had a blast of a great time. I truly enjoyed the many interactions the event made possible, and I just loved the level of energy that everyone was just oozing out. [Oh, goodness, I know that’s just going to be quoted somewhere.]

In addition to various tchotchkes (including some tasty Old Bay seasoning!), Dewalt sent everyone home with a 12V MAX cordless screwdriver and a Dewalt Magnetic ToughCase with bit kit. Dewalt also covered our meals (the barbecue lunch was quite tasty!), and handled overnight accommodations.

ToolGuyd always discloses this type of information, but it is always a pleasure to see companies proactively encourage such transparency. Dewalt also made it clear that they value our honesty (again, ToolGuyd maintains a strict policy to be as sincere as possible).

There’s so much about the new product line to write about! As you can tell, I am extremely optimistic about Dewalt’s 12V MAX tool designs, and cannot wait to get the whole lot in my possession for some real-world testing. In some of the quick hands-on tests I performed, I witnessed a few of the 12V MAX tools absolutely shaming one or more other of their competitors’ tools.

To those of you at Dewalt that may be reading this, thank you for a very nice show, and it was great talking with all of you! Unfortunately but understandably, there were quite a few unfinished conversations – one about interesting new motor winding configurations, another about the alarming absence of clock radios in Europe (get it? alarming?!), and a few others. I would love to be able to pick all your brains again in the future!

Enjoy the following gallery of a few pics I took of the facility. Some of the pics (#s 2, 3, 4) were taken by Dewalt during the event.