ToolGuyd > Hand Tools > Bit Holders & Drivers > Did Outlaw Fasteners Come Out With the World’s Best Screw?
If you buy something through our links, ToolGuyd might earn an affiliate commission. 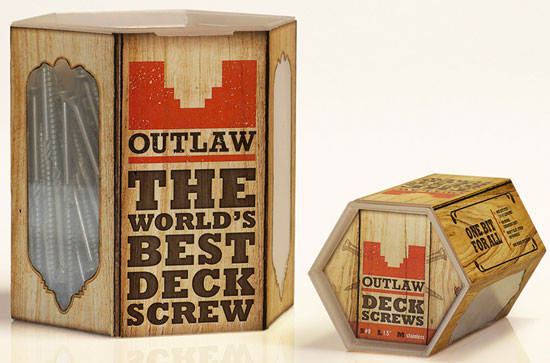 The folks over at Outlaw Fasteners are really excited about their new deck screws, and boast that they have come out with The World’s Best Screw.

It’s not just Outlaw that are excited about their new screws – a few weeks ago I received an email from an editor at another publication asking for my opinion about these intriguing un-strippable screws.

Could Outlaw screws really be that much better than what’s currently available?

Outlaw sent over a pamphlet, some sample screws, and their new UniGrip screwdriver bit for us to test out.

No more deck board jacking.

So let’s take another look at Outlaw’s marketing claims.

No more dropped screws. True, at least when driving new screws, and without magnets.

No more deck board jacking. I didn’t test for this, but can see how it works.

No more bit changes. True, thanks to the UniGrip design.

No more pilot holes. True, but only when working with certain materials (such as decking boards). 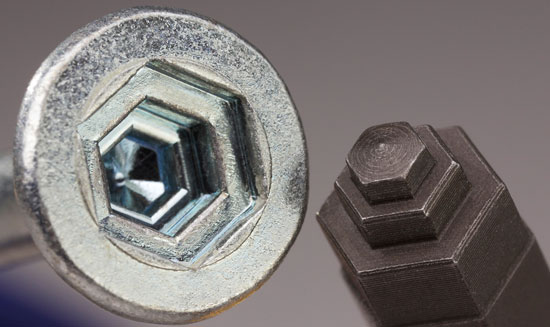 The UniGrip driving system is based on a stepped hexagonal design. Smaller fasteners have a 2-step recess, larger ones have a wider 3-step recess to allow for higher torques.

I should mention that bit-fastener engagement at the widest hex step seems to be a little shallow. This doesn’t seem to affect screw driving one bit, and if the larger screws had deeper 3rd step recesses, their heads might become comically large. Still, it’s an observation worth mentioning.

Outlaw’s UniGrip screw fitment is designed to hold tight and never cam out.

As mentioned, forget about the 18 driving points part, it’s misleading. But to Outlaw’s credit, a substantial amount of engineering went into their new screws.

First, there’s the UniGrip screw head that ensures you can use the same screwdriver bit for any Outlaw screw. On the under side of the screw heads are rigid ribs that helps the screws sit a little better in self-countersunk holes without requiring a separate operation.

Right now there are two material options – stainless steel or steel with ACQ finish coating for use in pressure-treated lumber. These fasteners have corrosion resistant enough to have passed 1,000 hour salt spray testing certification. 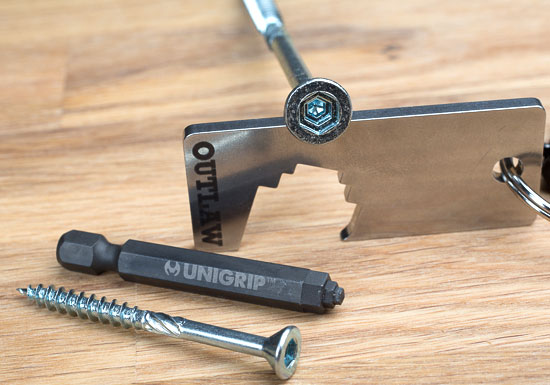 Only a couple of sample fasteners were provided for testing, but there were enough for me to get a good feel for the screws and the engineering behind them.

The threads are thin and sharp. Overall I found the screws to be very well made. Actually, they’re right up there with the best wood screws I have ever used.

Outlaw’s Kickstarter campaign launched today, as the company is seeking funding to produce a truck-load of screws.

Pledges start at $5 for the Outlaw bottle opener keychain, and $25 for a 1-pound box. There are some interesting perks at higher funding levels. $45 gets you a 1-pound box of screws and laser-cut six-pack caddy kit. There is also a deck chair kit, a 20-pound box level, and if you pledge $5K the product team will come to your house and build you a deck.

As this is a Kickstarter crowd-funding campaign, you will not be charged anything if the project does not exceed the inventors’ funding goal by October 30th, 2013.

Will you need a box of high quality deck screws for a Spring project around March of 2014?

As mentioned, I was pleased to find the screws to be well made.

But here’s the problem – regardless of how the Kickstarter campaign goes, Outlaw will still need to convince retailers and users about the merits of these screws. Robertson and Torx fasteners are easier to work with than Phillips, yet Phillips screws remain popular.

In order for the product to be successful, even if fully funded via KickStarter, the company will have to 1) develop a variety of compatible bit styles (high hardness for common drills and power screwdrivers, and high strength for impact drivers) and sizes (1″, 2″, and possibly longer), 2) convince big-box retailers to carry their fasteners in multiple sizes and quantities, and 3) convince installers and tradesmen to change their fastener preferences.

Ultimately, I feel that the UniGrip driving system and the screws’ design features elevate these new screws above plain Jane deck screws.

I am crossing my fingers that this time next year I’ll be able to find these screws at the local big box store, preferably at a lower price if t-shirts and other swag aren’t involved. Hopefully, if that happens, Outlaw will have found a way to design UniGrip truss-head wood screws as well.

Thank you to Outlaw for providing the review sample unconditionally. Review samples are typically given away, donated, or retained for benchmark and comparison purposes.

Disclosure: To help promote their Kickstarter funding campaign, Outlaw has also purchased a media ad on ToolGuyd for the month of October 2013 (look for it on the sidebar). This review/first look is NOT a part of that arrangement, and was largely written up before the potential for an ad arrangement was first discussed. As always, this review presents nothing but our honest opinions.

How Would You Use a Klein Magnetic Wrist Strap?