ToolGuyd > Accessories > Deal of the Day: Panasonic Eneloop Rechargeable Batteries and Charger
If you buy something through our links, ToolGuyd might earn an affiliate commission. 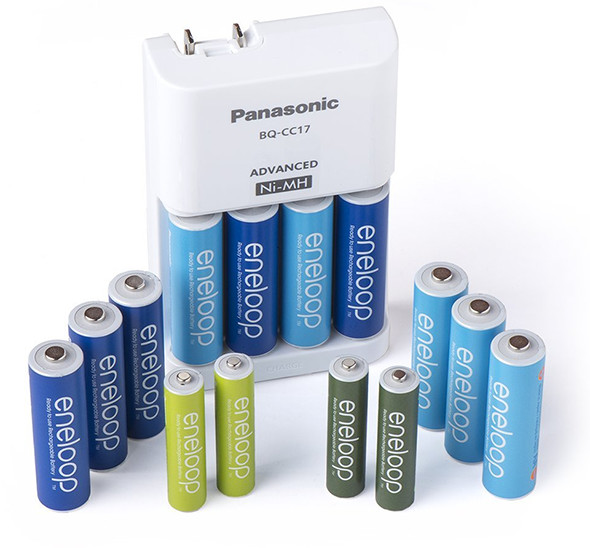 Over at Amazon, this Eneloop rechargeable battery starter pack is on sale, today only, 05/16/2016.

First things first, let’s talk about Eneloop a bit. Initially under Sanyo branding and now under Panasonic, Eneloop batteries are pre-charged and slow self-discharging rechargeable batteries. In other words, they’re fully charged right out of the package, and unlike older NiMH cells, they won’t self-drain when sitting in a shelf waiting to be used.

These batteries provide certain advantages to disposable alkaline batteries, and not just in how they can be recharged many times. It’s not just about cost economics. They can handle higher current loads than alkaline batteries, resulting in better performance and runtime with certain devices.

Take high powered flashlights as an example. You could power them with alkaline batteries, but you’ll get better performance at the highest brightness outputs with Eneloops. The same might be true for other rechargeable battery brands, but I couldn’t tell you. Eneloop has been my preferred brand for quite a few years now.

Eneloops are another example of awesome convenient everyday tools.

Alternatively, Lithium battery cells are also a good choice for high drain devices, but rechargeables still make sense for heavy and frequent use.

So back to this deal.

You get a 4-position charger, (10) AA batteries, and (4) AAA batteries. The batteries are colored, which I guess could come in handy for swapping out batteries on the go.

This seems like a great deal! It’s almost got me convinced that I need more batteries and an extra charger.