ToolGuyd > Hand Tools > EDC, Pocket, & Multitools > Pelican 3310 Glow in the Dark LED Flashlight
Happy New Year!
If you buy something through our links, ToolGuyd might earn an affiliate commission. 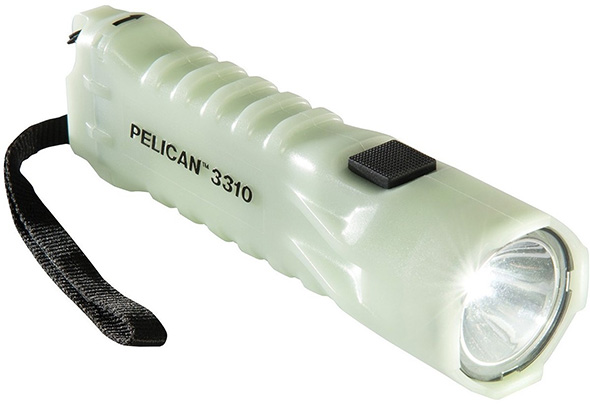 Most of the flashlight’s housing is made from a photoluminescent plastic, making it easy to locate when the lights go out. It would be accurate to describe this flashlight as a fairly substantial chunk of glow-in-the-dark material.

It’s also waterproof, to IPX8 (submersible) standards, and quite bright.

I was searching for a small Pelican or Pelican-like case when I first learned about the 3310ELS emergency lighting station, which consists of a mountable case and the aforementioned 3310 flashlight.

The one I ordered had lesser published specs, but what I received was the latest version of the flashlight. 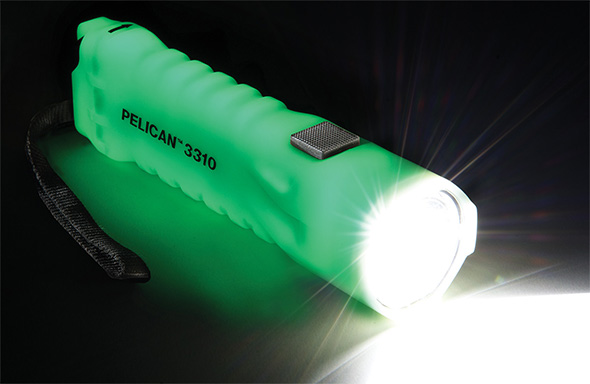 It measures 6.4″ long and weighs 6.2 oz with batteries (3AA). The batteries are pre-installed, requiring removal of a disposable plastic spacer to get things ready.

I am very impressed with the photoluminescent material. It’s so powerful that I was able to get some green glow action on my desk with the room light on.

Here it is charged up an Elzetta LED flashlight on high.

There are some other aspects to note.

The battery door has a partial-turn locking mechanism, with an O-ring providing waterproofing. It’s not the most comfortable battery door design I’ve seen, but it’s clever and gets the job done. You can lock the battery door closed with a quarter-turn of a slotted screwdriver.

Don’t have a screwdriver handy? There’s a plastic one built into the included wrist strap.

It also has built-in battery door retention. They thought of everything!

The Pelican 3310 LED flashlight itself is chunky in design, which is good for a flashlight you’re meant to use in the dark. Its body is rectangular and impossible to roll, although it can slide around on a flat surface.

The flashlight throws a large and somewhat uniform illumination circle with a very bright hot spot at the center. It’s not that great for an everyday light, but would be quite suitable as an emergency or outdoors light.

It is brighter in its low output mode than 39 lumens would suggest, but I’m guessing that’s because it has such a small and focused centered spot light.

This is one of the utilitarian flashlights I’ve ever used. It’s easy to spot in the dark, and has a usable beam profile for emergency situations, especially outdoors. It has a high water ingress protection rating, and is powered by common AA batteries.

It’s out of stock at the moment on Amazon, but their price is good if you don’t mind waiting a bit for it to ship.

There’s also a non-glow version, but… why? As mentioned, I wouldn’t want this as an everyday flashlight, and so why not opt for glow in the dark?

I need to do some more testing, such as to see if it’ll stay charged throughout the night. But since it glows in the light after being charged with another flashlight, I’m not too concerned. Still, it’s more of a “oh no, the power just went out, where’s the flashlight?!” kind of flashlight.

With that in mind, I don’t regret my purchasing decision one bit.