ToolGuyd > Hardware > Piranha Lox Mounting System
If you buy something through our links, ToolGuyd might earn an affiliate commission. 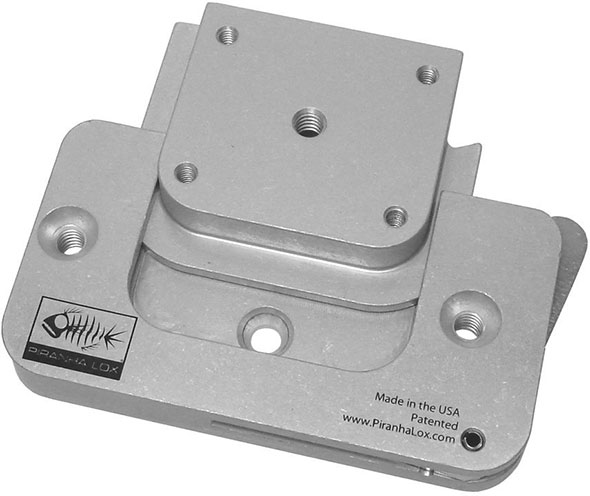 In today’s earlier post about the new Veritas Drywall Nuts, Fred brought up French cleats (examples), which is a simple but very effective means of mounting a wide range of objects to a wall. French cleats can be used for picture frames, storage cabinets, and lots of things in between.

This brought to mind the Piranha Lox quick-release mounting system. It’s simple really – you get a mounting bracket that you can fix to a wall, cabinet, tool cart, or any fixed surface, and a universal insert block that is mounted to whatever you want to be removable.

There are many other products in the Piranha Lox system, such as mounting plates that can be fixed to vertical bars up to 2″ thick, and there’s one pre-attached to a table mount. There are other types of insert blocks, such as one with a D-ring, and they also offer attachments, such as bins and caddies.

Piranaha Lox’s system isn’t closely related to French cleats, but there’s a resemblance. I consider the system to be better suited for when 1) you don’t need a wide stretch, such as if you want to mount something that’s rather narrow, and 2) you want positive lock, which French cleats typically don’t provide.

To clarify, I’m not saying that these are used in the the exact same way as French cleats, because they’re not. But they do remind me of French cleats in a way, and can be used for smaller scenarios where French cleats aren’t feasible.

It’s possible to use these with wider objects, but keep in mind that for best results you’re going to want access to the quick release lever. If you need to mount a wider object that covers up the quick-release lever, be sure to consider Piranha Lox’s extended lever model.

One of the bigger benefits is that you can use multiple block inserts with the same mounting bracket. Let’s say you need to switch from something that’s mounted to the universal bracket to a D-ring. Swapping them back and forth is a quick and simple process, as long as you have access to that quick-release lever.

The CoBlo: A 2-in-1 Air Hose Coupler and Blow Gun