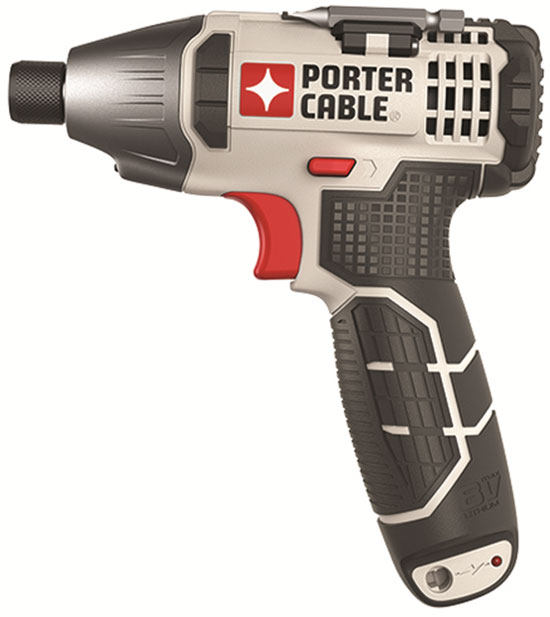 The other day Porter Cable sent over a press release discussing their new PCC842L 8V Max cordless Li-ion-powered impact driver. It looks very similar to the Black & Decker 8V impact driver ($50 via Amazon) that came out a few months ago, and is similarly featured as well.

Features at a Glance

Who Should Buy This?

Porter Cable engineers designed the new impact driver for tradesmen who are looking for a compact and lightweight driver for smaller fastening applications.

This is the tool for professional users who wouldn’t use the power of 12V or 18V-class cordless impacts to their full potential. It allows them to get the job done with less weight and bulk to carry around.

Who Shouldn’t Buy This?

Porter Cable has not mentioned charging time yet, but in my experience tools with built-in batteries typically charge in 4-8 hours. Sometimes an overnight charge is recommended. If you’re the kind of user that might fully drain the battery in a single workday, this isn’t the tool for you.

As you can tell from the torque specification, this tool is meant for use on smaller fasteners. If you think it will drive in large or long fasteners just because it’s an impact driver, think again.

I’m on the fence as to whether I think this is going to be a good tool or not. On one hand, Porter Cable has produced some pretty good tools recently, and so I’m not at all worried about the driver’s quality. On the other hand, is there really a market out there for low-torque impact drivers?

One of the benefits of impact drivers is that they deliver non-reactionary torque. If a bit binds or jams, the driver won’t wrench your wrist. But at low torques, it seems this won’t make much of a difference compared to a similarly powered conventional drill/driver.

Mac Tools’ new cordless drills, drivers, and impact wrenches are powered by Dewalt batteries, and I was hoping that would be a precedent for what was to come.

I also wish that the new impact driver could be charged via USB cable. I am sure Porter Cable had good reason to build it with a barrel connector, probably because USB is fixed at 5V and the 8V Max battery might need to be charged at 9V or even 12V. I regularly misplace small AC chargers and have really come to appreciate the ease at which USB-compatible devices can be charged.

All that said, I think the new impact driver – or impact screwdriver as Porter Cable describes it – has potential. It will be interesting to see what tradesman, techs, and even DIYers think about it.

At $50, the new driver is reasonably inexpensive and might nicely complement larger 12V and 18V-class drills.

The new driver kit will be available at Lowes, and we found an early product page for it over at Amazon.

As with other “8V Max” power tools, the nominal battery voltage is 7.2V.