ToolGuyd > Power Tools > Routers > Porter Cable Also Set to Release Compact Router Kits
If you buy something through our links, ToolGuyd might earn an affiliate commission. 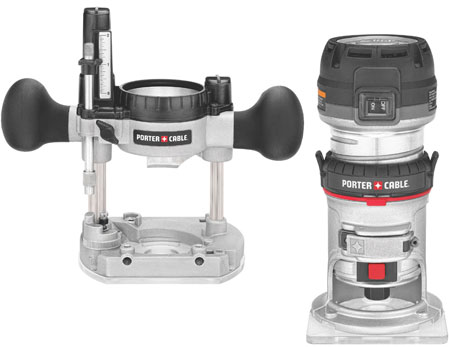 The other day we introduced Dewalt’s new compact router kits. This morning I had a good question – what about Porter Cable? Dewalt and Porter Cable are sister companies, with Porter Cable being well known for their dedicated woodworking tools Scouring their recent press release archive, I noticed that Porter Cable was in fact releasing fixed and plunge base compact routers that are very similar to Dewalt’s.

Porter Cable will also be releasing two kits: a fixed base compact router (450) and a fixed and plunge base combination kit (450PK). The router’s features, pricing, and list of available accessories are the same as for Dewalt’s new routers, which we wrote about in detail here.

EDIT: It looks like Porter Cable and Dewalt’s routers are not as identical as we first reported. Please see this update regarding the differences between the two versions.