ToolGuyd > Power Tools > Cordless > Porter Cable Brand Confusion and Mixed Messages
If you buy something through our links, ToolGuyd might earn an affiliate commission. 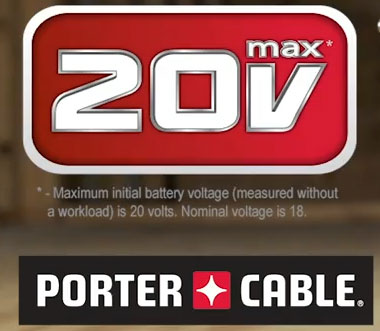 Recent comments and emails show that a lot of people are still confused about where Porter Cable stands. I have discussed the brand numerous times in the past, but it seems that they’re still sending out mixed signals.

Nobody from Porter Cable will discuss anything about the 20V Max line with me, and so the following is based on observations and speculation.

The New Porter Cable, Starting in 2009

Three years ago I discussed Porter Cable’s redesigned power tool lineup. At the time, new cordless and corded power tools hit the market exclusively at Lowes, and a lot of people saw them as relabeled Black & Decker products.

It seems to me that Porter Cable designed many of their more recent tools for the professional market. They continue to stress this in marketing and press literature, but they also tend to throw the word “value” around. That might have something to do with the confusion that sometimes surrounds Porter Cable’s handheld power tools, since value is something we typically only hear about in the context of consumer products.

Fred, an experienced professional who frequently comments and shares insight about his and his crew’s tool preferences and usage habits sums up what seems to be a popular observation and opinion. In his comment, Fred says:

[Porter Cable] seems to have more and more been relegated to a consumer – not professional standing – so that Dewalt (once known only for Radial Arm Saws) could be marketed as the professional line.

In the past a PR representative for another brand privately conveyed the same, that it seems Porter Cable is really struggling to establish brand identity. They pointed out how it is puzzling for Porter Cable to offer a $230 pocket hole jig while their 4-tool cordless combo kit is sold for $129 at Lowes.

Internationally Bosch has two product lines, with blue tools marketed to pro users and green tools to DIYers. Meanwhile, here in the USA Bosch’s DIY tools fall under the Skil brand. Porter Cable seems to have been trying to do the same, with one line of professional-grade woodworking tools and portable power tools, and a separate selection of value-priced tools aimed at tradesmen.

My feeling is that the 20V Max line won’t eliminate any source of confusion, but it’s a start. There is no word yet as to whether Porter Cable will replace their 18V line with 20V Max products, but my feeling is that the branding will be reserved strictly for redesigned pro-grade tools that compete with the likes of Ridgid and Hitachi. Maybe Porter Cable’s top brass have Bosch, Milwaukee, and Makita in their sights as well.

Stanley has separate levels of hand tools – Stanley, Stanley FatMax, and Stanley Xtreme, with Dewalt hand tools being positioned as the next step up. This shows that brands can maintain separate product lines.

So here we are, three years after Porter Cable’s major redesign, and we learn that they are soon coming out with another new cordless tool line under 20V Max branding.

If you have not already done so, check out the new drill/driver and impact driver that will be launched with the new 20V Max lineup. Looking closely, several things about these products give hints about Porter Cable’s intentions for the new line.

The maximum torque specs for the drill/driver is now offered in terms of “unit watts out,” presumably for easier comparison with Dewalt’s drill/drivers. This might also be a way to get pro users accustomed to seeing Porter Cable and Dewalt in a similar light.

Industrial designers don’t make color scheme decisions haphazardly. The shift to light gray from dark gray might have been done to better distinguish between 18V and 20V tools, but it also seems to be a subtle indication that Porter Cable is trying to reach back to their roots. Porter Cable wants to be seen more as the old Porter Cable pro users still remember, and a shift in color might make that easier, at least on a subconscious level.

Porter Cable also made their marketing intentions for the brand quite clear. 20V Max tools are all about speed, ergonomics, ease of use, and value for professional users. But darn it, there’s that word again, “value.”

I’d like to see Porter Cable branch out with a light gray product line and lower-priced dark gray product line. Whatever their plans, they’re going to have to do something to better differentiate their offerings.

How to Better Define Porter Cable as a Brand

If I were on the Stanley Black & Decker payroll, I would filter out and relabel all of Porter Cable’s lower-priced portable power tools and accessories under the Stanley FatMax brand. The Stanley FatMax power tools would then be positioned a step above Black & Decker’s, making them suitable for homeowners, DIYers, and budget-conscious tradesmen and pro users. Porter Cable’s branding would then only apply to pro-grade woodworking tools, air tools, and value-priced pro-grade portable power tools.

Fixing customer confusion is no easy task, but I would bet that Porter Cable has some sort of long-term strategy. There’s definitely potential for their portable power tool lines to rise up from beyond Black & Decker and Dewalt’s shadows, but it’s going to take a lot before the the tools are thought of in the same way as pre-2009 portable power tools. The 20V Max line is a step in the right direction, but this probably won’t clear up all of the confusion that still surrounds the brand.