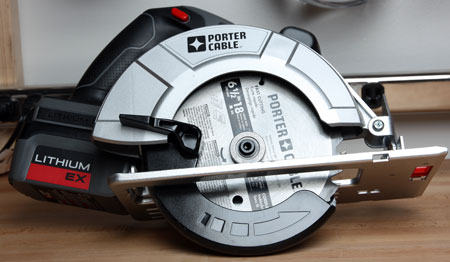 As you may recall, we’ve been reviewing the various tools included in Porter Cable’s Lithium-ion cordless tool kit. Today, we’re going to be reviewing their cordless 6-1/2″ circular saw.

I’ve got to hand it to the engineers over at Porter Cable – their 18V lithium-ion cordless drill driver really blew our expectations out of the water. Build quality, features, performance – Porter Cable got it all right. Can the same be said about the cordless circular saw? Keep reading to find out! 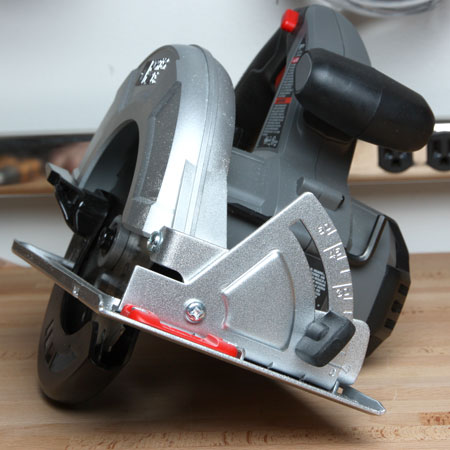 At 90° the saw has a reasonable maximum cutting depth of 2.1 inches. At 45°, the saw’s 1.7 inch cutting depth can still handle 2x lumber easily. The saw can be set to a 50° bevel and features an adjustable cutting depth.

To operate the saw, a two-way safety button must be depressed before you can squeeze the trigger. This is pretty standard on cordless saws.

One feature that is not standard on all cordless saws is an electric brake that stops the motor quickly when the trigger is released. It was quite surprising to find this featured in a “value oriented” power tool, but you won’t hear us complaining!

Porter Cable includes two batteries with the Li-ion combo kit: one LX battery (1.3 Ah), and one EX (2.6Ah) “extended capacity” battery. As is true for other cordless circular saws, it is best to use the larger capacity battery whenever possible. If it is depleted during a project, use the LX battery while the EX recharges.

As mentioned, a safety switch must be pressed before the tool can be used. It is located just above the trigger and is actually quite comfortable to use. Once the trigger is squeezed, you can release the safety switch and reposition your thumb or forefinger around the tool’s handle. The ergonomics of the safety-trigger-handle configuration is definitely a plus. 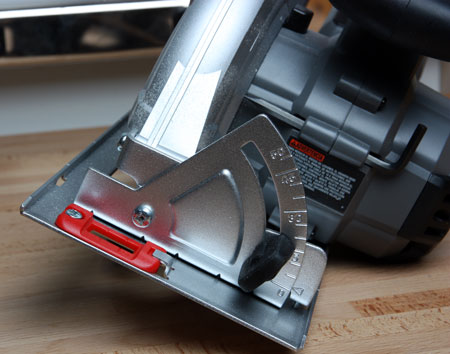 At the front of the saw’s shoe is a red cut line marker with 0 and 45° indicators. To be quite honest, I would have preferred notches in the shoe instead, although the marker is relatively easy to see. The front of the shoe is not graduated.

One thing that must be said – the shoe is much more robust than originally anticipated. It felt thick and solid enough that it won’t be warped or damaged under typical use. I’m not sure it’s durable enough for the jobsite, but it’s definitely more than strong enough for home DIY use.

Bevel and depth adjustment knobs are rubberized and easy to loosen and toggle. They’re a bit on the small side, but this posed no real issue, even when wearing gloves. The knobs are about the same size as the ones used on Dewalt’s cordless saw. The bevel and depth settings can be adjusted at 5° and 1/4-inch intervals, respectively.

Both handles are large, comfortable, and lined with a soft-feeling rubber grip. A raised-bump texture effect on the left and right sides of the handle provides a nice and secure finger-tip grip. Porter Cable could have gone with hard molded plastic, but it was nice to see that they put extra thought into ergonomics and user comfort. The base of the handle is large and also features the same soft rubber surface. 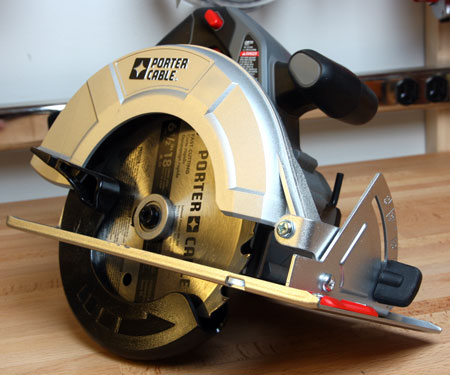 While other DIY-level circular saws (Ryobi 18V One+) are built to use smaller 5-1/2″ blades, the Porter Cable is built for 6-1/2″. This means that replacement and upgrade blades are going to be far easier to find. An 18 tooth 6-1/2″ ATB blade, well suited for softwood, plywood, MDF, and OSB, is included in the kit. Changing the blade is relatively quick and easy with onboard tool storage and a spindle lock.

Quite frankly, the saw is a pretty decent performer. No, it does not have the power of a corded model, so don’t even think of cutting through yards and yards of 4×4 hardwood with it. Still, it cuts through pine studs, plywood, and 1x hardwood like butter.

Vibrations were at a minimum, and the saw’s handle design was not at the least bit tiring. As mentioned, the saw features an electric brake which stops the blade as soon as the trigger is released. The brake worked well, but if you don’t want to use it, you can ease up pressure on the trigger half way and the blade will start slowing to a stop. 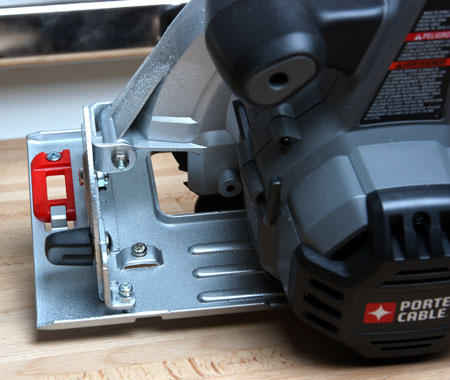 Over the course of the past few months, we used Porter Cable’s cordless saw interchangeably with other corded and cordless models. It is built well, fully featured, and performs even better than expected.

Not that it claims to be one, this is by no means a pro-level saw. The upper guard blade is plastic, and the shoe, while robust, is not as structurally reinforced as those on many pro-level saws. Additionally, the bevel and depth adjustments are not as fine-scaled as one would find on a pro-level saw.

Most of the cost-cutting compromises were made to features intended more for the jobsite than the average intermediate or even advanced DIY user. DIYers don’t really need magnesium upper guards, super-durable saw shoes, or finer adjustment scales. In our tests cutting ply, 2x studs and beams, and 1x hardwood, the saw performed impeccably, and that’s what really counts when it comes to DIY use.

Whether included as part of a NiCad or Li-ion combo set, or as a standalone upgrade (that one also includes a laser guide), Porter Cable’s 18V cordless saw offers decent performance at an incredible value. Heck, the Porter Cable costs less lower than to upgrade from another brand’s standard cordless circ saw to the one with a blade brake!

Although it’s not quite built to professional jobsite standards, this saw is well built to a reasonably high quality, and it offers great performance at a consumer-friendly price.

In what looks to be a growing pattern, Porter Cable has impressed us yet again.

Lowes carries this saw as a standalone upgrade or as part of a Li-ion or NiCad combo set.

Thank you to Porter Cable for providing the sample for this review unconditionally. Review samples are typically given away, donated, or in some cases kept for further testing or benchmark and comparison purposes.