ToolGuyd > Power Tools > Cordless > Porter Cable Cordless Vacuum
If you buy something through our links, ToolGuyd might earn an affiliate commission. 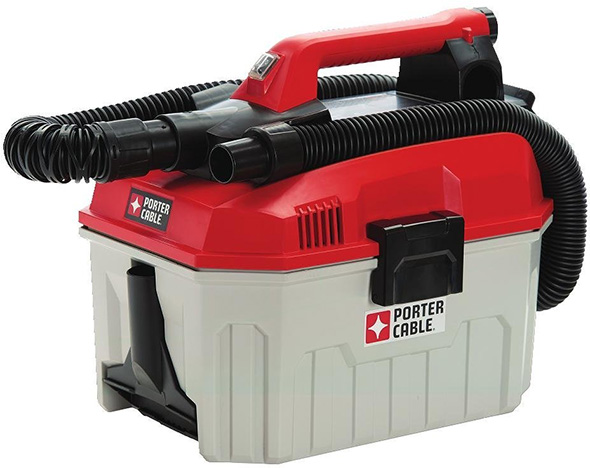 It’s said to deliver up to 28 mins of runtime when powered by a 4.0Ah battery, delivers up to 34 CFM of airflow suction, and can hold up to 2 gallons of dust and debris.

The vac features a 7.8 ft hose and wide nozzle and crevice tools that dock on-board for easy storage. Its filter is washable and replaceable.

A few weeks ago, in response to my post about Porter Cable not coming out with new tools lately, someone remarked that some blogger declared this Porter Cable vac to be better than Dewalt’s. This is what I wrote about that:

The PC PCC795B, compared to the Dewalt e cordless and AC vac, has a less than 10% higher on-paper CFM rating. But its hose is longer, and from images it has more bends and folds at the vac adapter end, which could affect suction and air volume. (In regard to real-world vs. on-paper specs.)

The Dewalt has an AC cord and 18V and 20V Max compatibility.

Porter Cable’s 20V Max lineup is limited, and is currently capped at a 4.0Ah battery pack.

The PC model is different from Dewalt’s, and I think it would be a long stretch to describe it as being “better,” based on 34 vs 31 CFM rating.

The PC has a longer hose, but how long of a hose do you need with a handheld portable vac? I’ve never found the Dewalt’s hose to be lacking.

The Dewalt is equipped with a HEPA-rated filter. The PC is only described as having a “washable cartridge filter.”

The Dewalt is arguably better. While it’s good to see an expansion to Porter Cable’s lineup, there’s nothing distinguishable about the vacuum, other than it being the sole battery-powered vac available to PC 20V Max users.

To this I would add that the Porter Cable vac is pricely lower, and it’s currently the only in-brand option for anyone who is wholly dedicated to Porter Cable’s 20V Max lineup.

While I’d say Dewalt’s is better, or as at least a more appealing product in my eyes, this one rings in at a lower price than Dewalt’s cordless and cordless/AC hyrbid vac options. It MSRP is $79, and it’s on sale as of the time of this posting for $68.