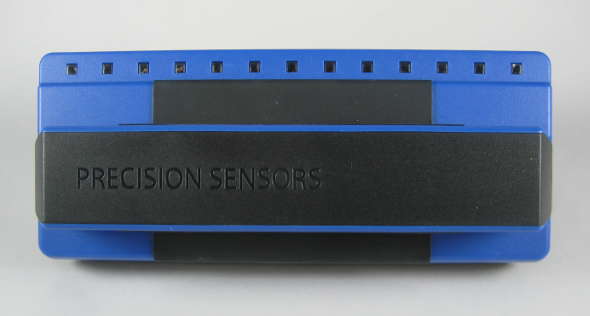 The Precision Sensors Profinder 5000 stud finder doesn’t look like other stud finders, nor does it work exactly the same way. Rather than detecting studs with a single narrow sensor window, the Profinder 5000 scans the wall along its entire 7″ width. And when a hidden stud is detected, a series of LEDs across the top of the Profinder 5000 will light up to show you its location.

Also unlike most other stud finders, the Profinder 5000 can detect multiple studs at the same time. Precision Sensors claims it can detect wood, metal, and other materials up to 1.5″ deep behind the wall.

I have not found a definitive source, but a few people who have tested Precision Sensor’s Profinder 5000 say it is just the Franklin Sensors ProSensor 710 but repackaged for Costco. I cannot verify whether that is true, but the two products look very similar and are very similarly featured. 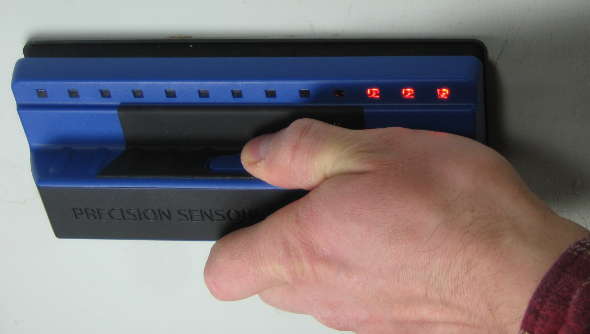 To activate the Profinder 5000, just push and hold the button on the top of the handle. You don’t even need to be touching the wall when you turn the sensor on, which is one more way it’s different from traditional stud finders.

When you place the stud finder on the wall over a stud, the LEDs corresponding to the position and width of the stud will light up. Then, you just slide the Profinder 5000 along the wall to find other studs.

I first saw this stud finder at Costco, where they had a demo model chained to a test wall. The wall had a few different stud configurations so you could see the stud finder work over an empty bay, one stud, or two studs. After playing with the demo model, I thought it beat the heck out my old Zircon, so I purchased one for myself. 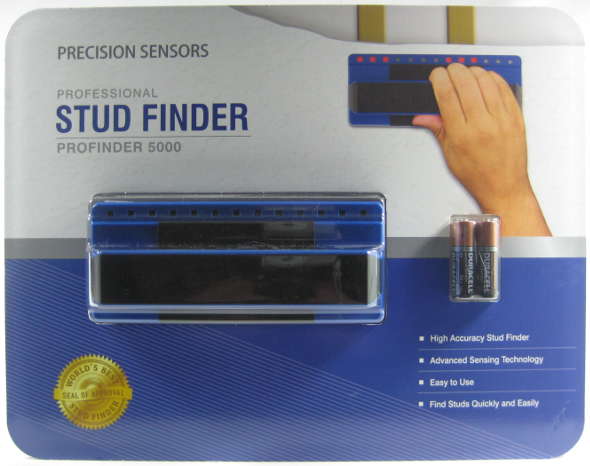 Rather than a box or blister pack, the Profinder 5000 comes in a carded package. Removing the stud finder was as simple as pulling a tab on the back of the package to get under the cardboard, and then pretty much destroying the rest of the package to get it out. This is not a product you are going to return with intact packaging. 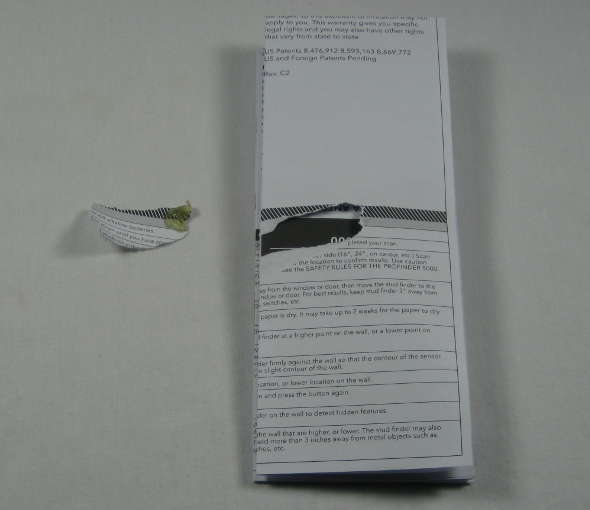 To install or replace the batteries, you simply slide the black part of the handle to the left and lift it off the body of the stud finder. Precision Sensor was kind enough to ship real Duracell AA batteries with the stud finder rather than cheap off-brand batteries that last about a quarter of the time and are more prone to leaking.

Test Scenario One: Hanging a Cork Board

After I played with the Profinder 5000 on just about every wall of my house, I let my daughter try to find some studs. She has never used a stud finder before, although she has seen me use one. After a few tries she was quickly locating the studs in our kitchen wall.

We were both ready to put the stud finder to a real test, and used it to hang a large cork board in her room. I let my daughter use the stud finder while I marked the location of the studs with some blue painters tape. 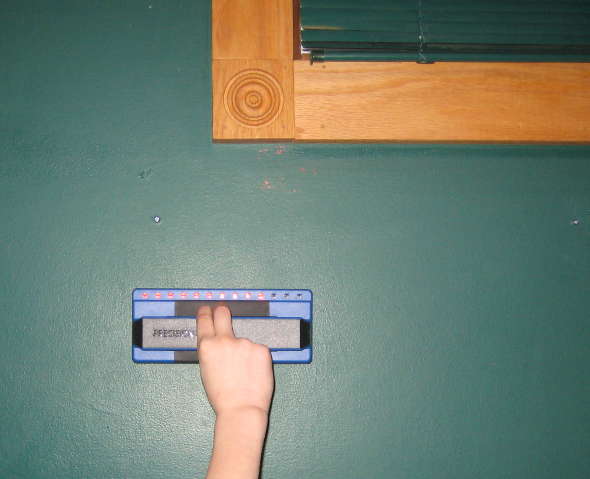 When I drove the lower right screw, instead of a triple stud like the stud finder shows above, I hit air. We assumed the triple stud higher on the wall would continue all the way to the plate. So my daughter tried the stud finder closer to the screw and found two separate studs with a space in between them. 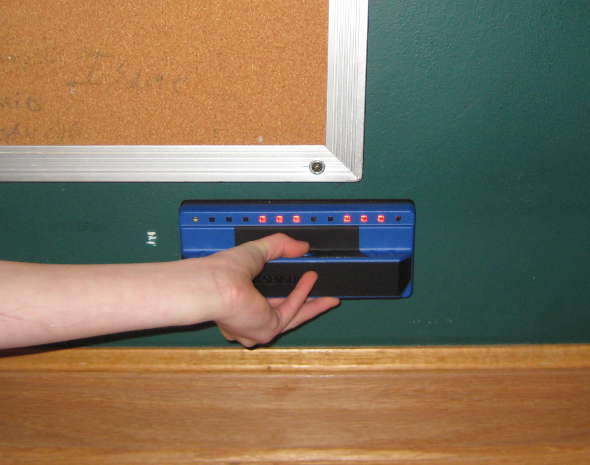 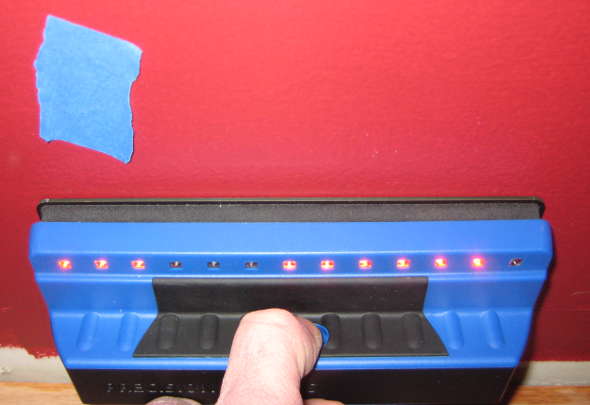 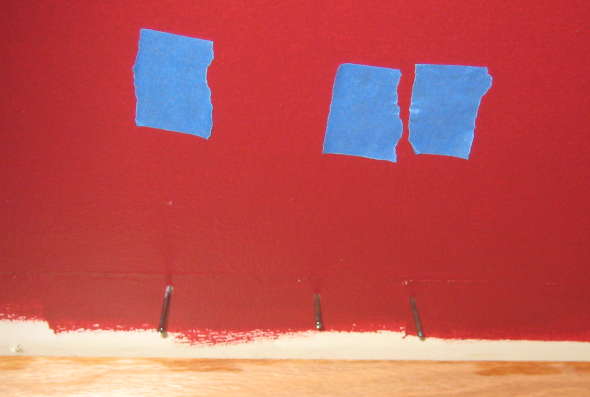 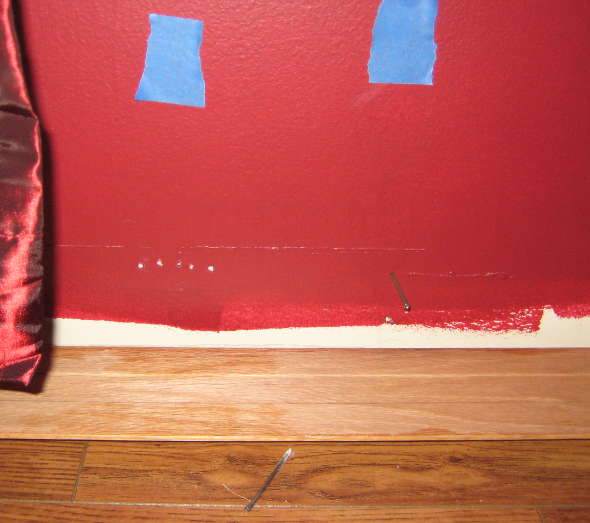 Just over to the left of the last spot, the Profinder 5000 showed another stud. As you can see in the picture I tried 5 different locations, but I could not hit a stud with a nail. I think it may have been detecting a wire for a switch above it that had been added after the construction of the room. Since it was added later the wire won’t be stapled to the stud and could be resting on the drywall. 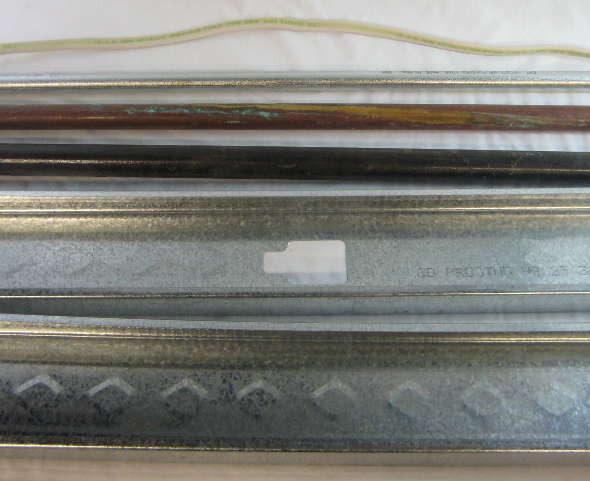 I have a section of wall in my basement that is finished with 1/2″ drywall on one side and open on the other, so I decided to test the Profinder 5000 on a few different materials.

First I tried a few metal studs. I found the Profinder 5000 does indeed detect metal studs. Strangely though, it will not show a wooden stud at the same time as a metal stud, but when I slid the finder off the metal stud the wood stud would suddenly appear. It will however detect two metal studs simultaneously.

Next I tried some black gas pipe, 3/4″ copper pipe, and 1/2″ conduit. If the metal was farther than 1/2″ to 3/4″ from the drywall the Profinder 5000 wouldn’t detect them, but as soon as I brought all three materials closer, the stud finder lit up three LEDs just like a wooden or metal stud.

I held a section of 12 gauge romex inside the wall cavity and found the Profinder 5000 started to detect the wire about same distance away from the drywall as the metal pipe.

Finally, I tried 1-1/2″ schedule 40 PVC pipe. The Profinder 5000 wouldn’t detect the PVC pipe no matter how close to the drywall I put it.

In my experience, stud finders can be finicky beasts. The Profinder 5000 is no different, but there are some of the things it did well.

Marking studs: You don’t have to slide the Profinder 5000 back and forth across the wall to mark the edges of the stud to find the center, For a 2×4 stud, just pick the middle LED that is lit and you’ll be in the meat of the stud.

Ease of use: My 10 year old daughter could – and did – use it successfully. You don’t have to be careful about keeping it tight to the wall – no hitting a lump in the drywall and having to start over.

There are also some things it didn’t do so well.

Complicated framing:  With all stud finders, there is a bit of experience required to figure what is going on in all but the simplest 16″ on-center stud bays. The Profinder 5000 can get confused around door and window headers, at first showing a few LED’s lighting on the edge as you move over the header, then suddenly all the LED’s go off as you are completely over the header.

Consistent results: It also seems to have problems with closely spaced studs. Sometimes a continuous string of LEDs will light showing no space between the two studs and sometimes it will show two separate studs. Because it scans the wall so deep, it can pick up a bunch of different things that aren’t studs, essentially showing you a stud where there is none.

In conclusion, if you’re a homeowner with little experience trying to hang a picture in the middle of a flat expanse of wall, it seems like the Profinder 5000 would be a great tool. If you are trying to put up trim around an entire room, you’re probably going to get frustrated a few times. Then again, I have yet to find a stud finder that hasn’t frustrated me at some point.

I found the Precision Sensors Profinder 5000 stud finder at Costco for $35. I think I just got in on the tail end of that deal, because I could not find it again during my last trip there. You’re going to pay almost $50 if you want to buy it from Amazon. You can also buy the seemingly identical Franklin Sensors Prosensor 710 for $50 on Amazon.

What Happens if You Leave a RevMark Marker Uncapped for 4 Days?