ToolGuyd > Compressors, Air Tools, Nailers > A Quick Guide to Air Line Couplers and Plugs
If you buy something through our links, ToolGuyd might earn an affiliate commission.

I was moving my air compressor the other day and had to disconnect the air hoses. When I plugged one of the hoses back in, no matter what I did, I couldn’t make an airtight connection. I figured the coupler had gone bad, so I turned off the compressor and decided I’d pick up a new coupler the next day.

I’ve had problems before, with buying quick connect air fittings. Once, I purchased a male plug that I thought looked identical to every other plug I had in my garage — I even compared it to one I had brought with me to the store — but after I bought it home and tried to plug it into the coupler on my compressor, it just wouldn’t lock in place. Yet it worked just fine in another coupler I had. I just attributed it to differences in manufacturers and moved on.

To make things easy, this time I bought a “universal” coupler and figured it should work. I got home, replaced the coupling, and had no problem inserting the plug. Still, I was bothered by my lack of knowledge about plugs and couplers, so I started researching the topic, starting at Stuart’s post about compressed air nuisances, and quickly got lost down a rabbit hole. I figured if I was confused, I couldn’t be the only person — I’d write a post that would hopefully straighten it out.

What I found is that there is a lot of misinformation about what types are equivalent. I browsed several forums and found people contradicting what manufacturers were saying, and so I decided I’d only use data from the manufacturers of these fittings, rather than trusting what any individual claimed.

Most couplers look the same on the outside, so let’s look at plugs first.

First off, there are different basic flow sizes, such as 1/4″, 3/8″ and 1/2″. This doesn’t refer to the size of fitting on the end of the plug, but rather the volume of air the plug can handle. For our purposes, we are going to concentrate on the 1/4″ basic flow size fittings, as this is the size that you are going to run into for most home and light commercial use.

There are two other type of plugs in the 1/4″ basic flow size you might run in to: V-style (high flow) and Lincoln*. I did not find these styles at any of the big box stores, but Northern Tool carries V-style and Menards carries Lincoln style.

*From here on out, everything everything should be assumed to be 1/4″ basic flow size and each style will be called by its most commonly used name in bold.

Thank you to Greg for his insights and help in clarifying this part!

Above is an industrial style plug. They can be called by a few different names. For instance, this can be also be called a Milton plug, but more correctly it is Milton M-style. It is also known as type D or I/M style.

To make it even more confusing, Milton has a D-style plug, but that isn’t necessarily compatible with this style. 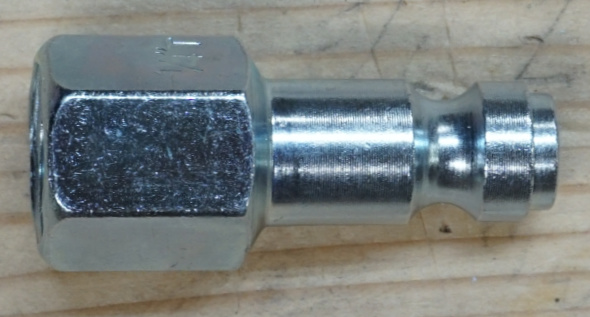 Above is an automotive style plug: Also know as a Truflate, Type T, or C-style.

The V-style plug is a high flow style plug, it is similar to an industrial type plug, but it has a larger opening to accommodate higher airflow as you can see above. The photos here show a Milton V-style, but other companies also make high flow plugs.

Then there is the ARO plug, above, which can also be called A-style or type B. 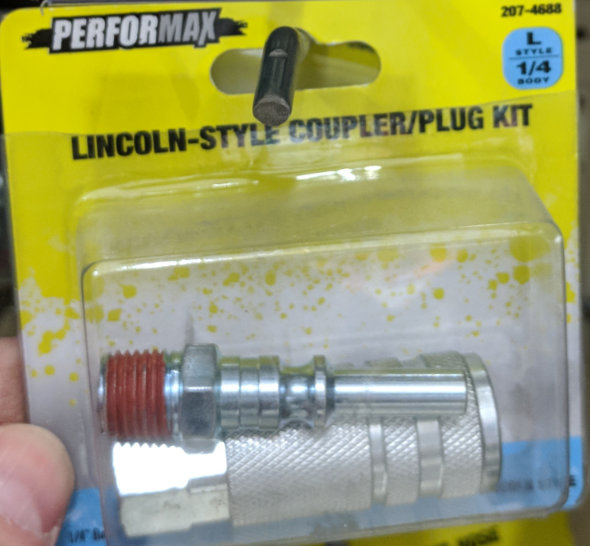 Finally there is the Lincoln style shown above.

Each of the different plugs has a matching coupler. If you have that specific coupler, chances are it will only accept a plug with the same style. Although I found some industrial only style couplers will accept V-style plugs, I wouldn’t count on it.

The problem is most of the couplers look the same on the outside, so they are harder to identify than plugs. There is an somewhat accepted way of identifying them via counting the number of thin and thick “stripes” on the body of the coupler, but it’s pretty useless because not everybody adheres to it.

Also unless you have two couplers from a single manufacturer, one company’s thick stripe can look like another companies thin stripe. Plus you have to remember which marking are which style and the plugs don’t have matching markings.

There is also the Milton V-style coupler. It is designed to be the high flow mate to the Hi-Flow plug. Milton says that they are also designed to accept A, T, and M style plugs (if you are paying attention that’s ARO, automotive, and industrial plugs).

I found that another company’s high flow coupler would also accept automotive and industrial plugs, but that was in store and not under pressure. I don’t want to make a claim if I can’t find documentation.

I’ve also read that some universal couplers are not as reliable as single-style couplers – that they are more prone to leakage especially if there’s sideways pressure applied to the plug.

Another feature of couplers is that they can be either manual or automatic. You can tell the difference by looking at the photo above, the automatic coupler has the sleeve pulled back when there is no plug inserted.

As far as I can tell, only universal and V-style couplers are available in automatic styles.

Several manufactures have recognized how confusing the many different types of plugs and couplers can be and have adopted a color-coded system.

Milton has the ColorFit system. Here’s the chart: 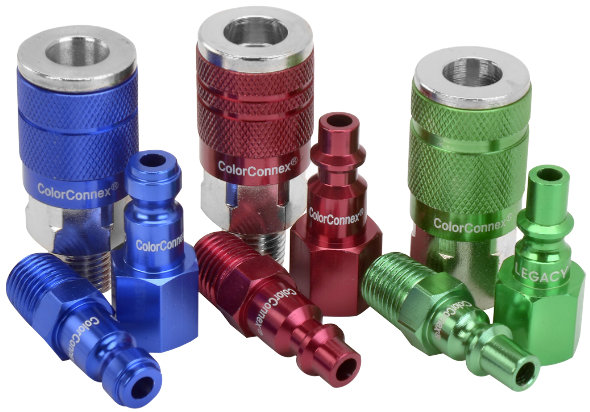 Legacy has their ColorConnex system.

One advantage Legacy states for using their color coded system is that you can quickly distinguish your oil-less lines from your oiled lines. Say you are using an paint sprayer – you don’t want a hose with residual oil in the line, and so you might pick green for all paint spraying equipment and use red for everything else.

So what’s the takeaway from all this? Chances are you are probably using either automotive or industrial style plugs and couplers. If you want to be safe, you can purchase a universal coupler and you should rarely ever have a connection problem.

If you want to be absolutely safe, my recommendation would be to pick a more reputable manufacturer’s fittings and just stay with them, preferably a manufacturer that you can buy locally so you can quickly replace a coupling if you need to — either that or make sure you have a few spares. The reason for this is because plugs and couplers from the same manufacturer are more likely to fit better and be less prone to leakage than mixing brands, styles, or using universal couplers.

Or if it’s really confusing, and you have to use different styles of plugs and couplers, you can always use color coded ones.

Personally, I’m going to slowly switch over to Milton V-style plugs. It’s a solid brand that I can get locally, V-style connectors have less restriction, and the couplers work with the most different styles of plugs.

What types of quick-connect couplers and fittings do you use? Why?