ToolGuyd > Editorial > Rant: Our RAYOVAC Batteries Leak so Much, We’re Switching to DURACELL
If you buy something through our links, ToolGuyd might earn an affiliate commission. 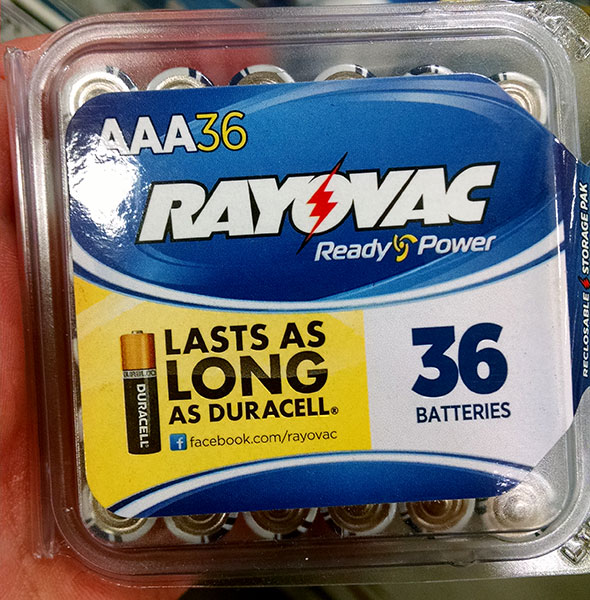 I started buying Rayovac alkaline batteries a couple of years ago, starting around 2014 when I came across a holiday promo and posted about. Rayovac claims that their batteries last as long as Duracell.

Some batteries were made in the USA, others in China. I sought out the ones with made-in-USA packaging. I bought more Rayovac batteries the following year, and more again the year after that.

Almost every year now, I buy multi-packs or bulk packs of Rayovac batteries. They are made in the USA and had decent pricing.

I like using rechargeable batteries in some devices, but don’t really want to put pricey NiMH cells in kids toys. Rayovac’s disposable alkaline batteries worked well enough at good pricing, or so I thought.

But I am NEVER BUYING RAYOVAC BATTERIES AGAIN. (Or at least not for the foreseeable future.)

Maybe 18 months ago, batteries started leaking. A kids toy here, a flashlight there. Some were easily cleaned, others not so much. I still have a kids toy in the garage that needs to be very thoroughly cleaned, and two penlights that are out of commission.

A couple of months ago, I had to throw out some Rayovac batteries because some of them leaked and corroded in their packaging. The printed expiration date was still years away. Maybe it was a defective batch? Maybe the batteries were somehow short-circuited? I didn’t trust those batteries and discarded them. 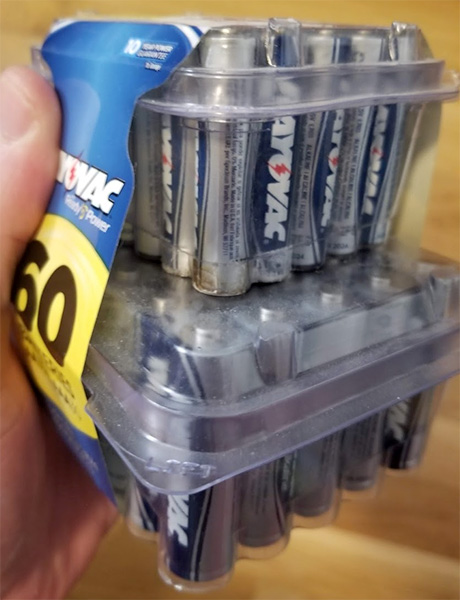 A couple of weeks ago, I came across MORE Rayovac batteries that leaked right in their packaging. These batteries are supposed to have a 10-year storage life guarantee. This is an unopened package!!

Are you kidding me?

Two weeks ago, our TV remote stopped working. That’s weird, I changed the batteries a couple of months ago. The Rayovac batteries had leaked.

The  other day, my kids’ Lego Duplo train stopped working properly. I checked the batteries. The Rayovac batteries had leaked. 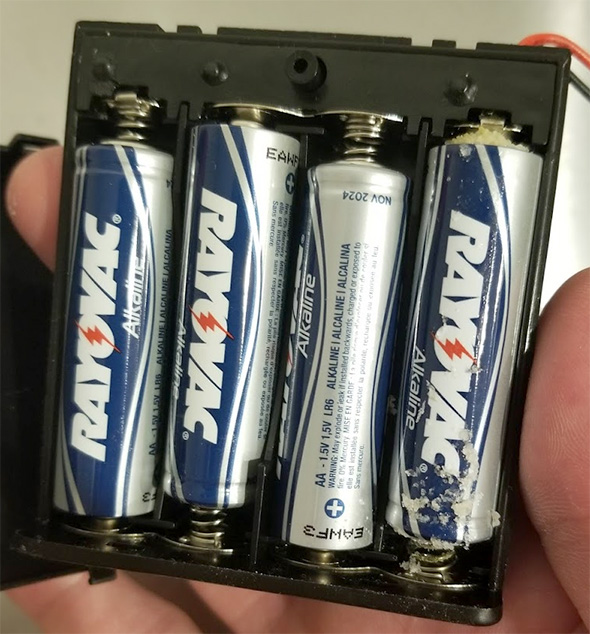 I have a battery pack on my desk that I use with electronics projects. It has a physical switch, which was toggled to “off.” The leads also weren’t connected to anything and were separate. I checked it, just in case, as I had not used it recently. Rayovac batteries with a November 2024 expiration, lightly used, had leaked. 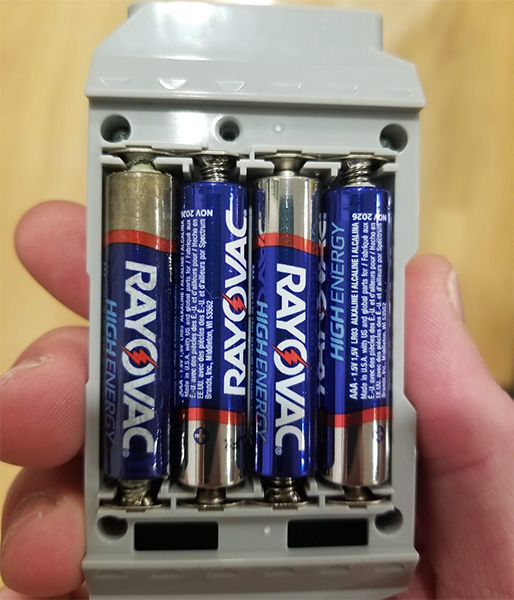 The batteries leaked in the device, corroding some of the terminals.

I’ve had Rayovac batteries leak inside two penlight flashlights and two keychain flashlights. I don’t remember the brand, but they were likely Rayovac because that’s the predominant alkaline battery brand I’ve been using for just about five years. I was perplexed, wondering how there could have been vampiric drain or other unusual behavior. Were the batteries being over-depleted? What was going on?

Luckily, I use Duracell Professional batteries for many ToolGuyd-related test products or equipment, and I don’t remember experiencing any leaky cells with that brand.

When my parents moved a few years ago, we went through boxes of toys that were stored in their shed and I discovered several toys that still had batteries, and they still worked! Toys that I hadn’t seen for at least 15 years still worked, despite being left in a non-insulated shed.

But here, I have Rayovac batteries that leak in remote controls, battery packs, kids toys, flashlights, and even in unopened factory packaging?!

The first couple of times these batteries leaked, I blamed the devices. Maybe they were draining batteries and over-depleting the cells, or something to that effect.

But now, I’m convinced it’s the batteries. They’re stored in different places in the house, such as in a cabinet in my office, in a box in the basement, in a kitchen cabinet, and in a drawer in the heated and air conditioned garage. They’re all kept in room temperature conditions.

I had other brands of batteries leak before, but on rare occasions. But what’s happening with these Rayovac batteries? It’s just absurd!

Most if not all of my Rayovac batteries have been purchased from Home Depot or Lowes, and all of the packs I’ve purchased since 2014 were made in the USA.

At this point I have zero faith in Rayovac. I asked them why this could be happening, but they never responded. I provided some serial numbers and they sent me some packs of replacement batteries.

I used Duracell and Duracell Pro batteries prior to Rayovac, and I’ll be going back to them. I also use Energizer Lithium cells, but I probably won’t buy Energizer alkaline batteries anymore either. Energizer purchased Rayovac in early 2019. What if Energizer-branded batteries start coming out of the same factories and lines that make Rayovac batteries? I’m not taking that chance.

I’m just so mad about all this. I have experienced so many more leaky Rayovac batteries in the past year or two than with all other brands in the past 15-20 years combined.

There’s no common factor by which I could blame the leaky batteries on anything but Rayovac.

I no longer trust Rayovac batteries, and I don’t trust their “10 year storage life guarantee.” I won’t use them in kids toys, flashlights, or really anything anymore. How can I? I’m tired of cleaning out battery compartments, and I’m tired of Rayovac-powered devices unexpectedly failing to work properly.

I’m going back to Duracell.

All of the headaches that Rayovac batteries have given me are nowhere near the money I saved.

Maybe somehow I’ve been unlucky. Or maybe there are unknown factors at play. Maybe this failure rate is due to… I just don’t know. Did Rayovac redesign their batteries with weaker seals than in previous years? Did they make some other change to save production costs on the bulk packs I like to buy during holiday season promos?

All I know is that I’ve experienced an unacceptably high number of Rayovac battery failures and leaks in the past year or two, and I’m done with the brand, at least until they can explain the situation.