ToolGuyd > Hand Tools > Electrical Tools > RCProPlus Soldering Station Review
If you buy something through our links, ToolGuyd might earn an affiliate commission. 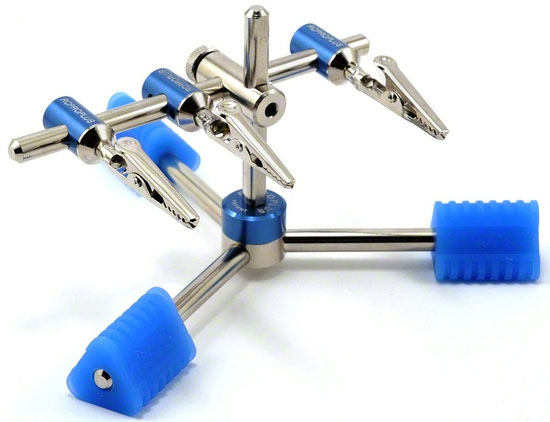 This one, the RCA1218 by RCProPlus, is designed for radio control model enthusiasts. The RCProPlus soldering station is a little different than the ones previously discussed, not because it’s aimed at RC hobbyists, but because it’s designed specially for soldering connectors onto wires.

I have been doing a lot of work with wires – mainly testing but also some soldering – and knew I had to try this third hands station. I bought one from A Main Hobbies for just under $30.

Assembly requires use of a small hex key to adjust set screws, but once you have things set there is a thumb screw that locks in the horizontal rail.

I like that the alligator clips and their brackets are fixed horizontally. The design does mean this is best used for working on wires, but that’s what I purchased it for.

You can quickly disassemble the entire contraption for easy storage and portability.

While not very clear in the picture, there are holes in one of the alligator clip brackets and a peg in the horizontal clamp. This allows you to lock the horizontal bar at the 0° and 180° positions, making it easy to work on the top and bottom of connectors.

Another aspect I really like is how there are three wire clips. Most third hands stations only come equipped with two clamping arms. Two alligator clips hold the parts that are to be soldered together, and a third holds the wire a short length away from the joint for additional support.

The alligator clips are not very aggressive, but I would be happier if they were cushioned. It would be even better if they could be removed from their brackets, but they’re soldered in really well. A bit of silicone tubing or a minute of filing should make quick work of the teeth, but I would be happier if I could install the alligator clips of my choosing.

Soldering wires can be tricky work. Many third hands units and soldering aids are meant to hold smaller components or parts, and can sag or shift when used to hold wires in place.

This is a great soldering tool, and it really does a nice job holding wires in position for testing or soldering. If you are looking for a general purpose third hands tool, this might not be the best for your needs.

I definitely recommend it, but you should know its limitations before seriously considering adding one to your tool box, workbench, or RC kit.

Here’s a video demo from the place I bought the soldering station from: