ToolGuyd > Power Tools > Cordless > Reader Question: Which Cordless Caulk Gun, Milwaukee M12 or Dewalt 20V Max?
If you buy something through our links, ToolGuyd might earn an affiliate commission. 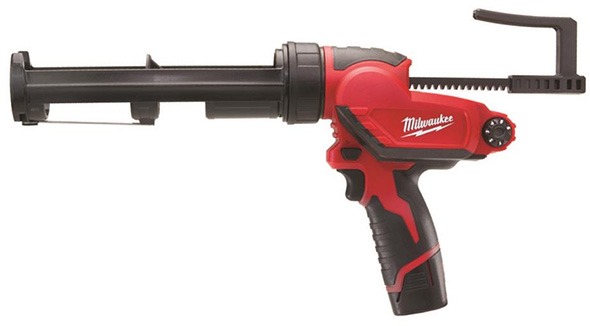 Albert has a big waterproofing job ahead of him, and is looking to buy a new cordless caulk gun.

He is already invested in 2 cordless platforms – Milwaukee M12, and Dewalt 20V Max, and is considering both models. But there’s a catch – both have good reviews, and he’s stuck trying to determine which will be better for his needs.

Looking at each model, I see that both are around the same weight, and both have similar features. 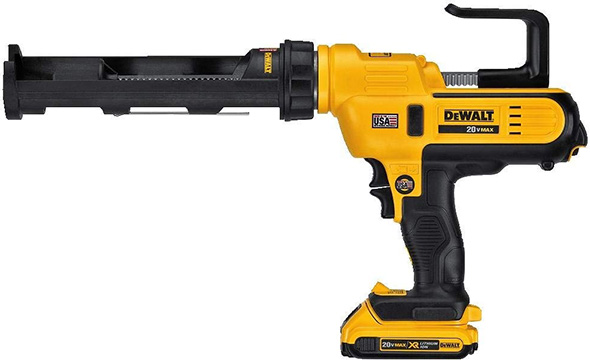 They both have anti-drip features, variable speed, hanging hooks, and both can be expanded to work with other types of cartridges. As shown here, both models are equipped to fit 10 oz caulk and adhesive tubes.

In terms of runtime, Milwaukee’s M12 cordless caulk gun is said to be able to dispense up to (150) 10-ounce tubes on a full battery charge. Presumably, they’re referring to the 1.5Ah battery included in the kit.

The M12 cordless caulk gun can provide up to 400 lbs of force, which is a little higher than an Albion 12:1 manual drive caulk gun. (Their 26:1 high viscosity model is rated to 300 lbf of thrust.)

I can’t find a power spec for the Dewalt cordless caulk gun, but Milwaukee’s M18 model (previewed here) can deliver up to 950 lbs of force and can dispense up to (200) 10-ounce tubes of material. I would assume that the Dewalt is similarly spec’ed.

Reviews for both models are positive. I advised Albert to try to find reviews that specifically mention the thickest types of caulk (or adhesive) that he plans to use it with, but in trying that myself, not much comes up.

He believes that the Milwaukee will be sufficient, but is worried that he’ll run into problematic applications at a later time, and regret not spending more for the 18V-class tool.

So, what do you guys think?

Unfortunately, this is not something I could look into testing myself, at least not before Albert wants to make his purchasing decision.

The Dewalt, or another 18V-class tool, might be more future-proof, but it’s hard to do with each and every tool. There are many instances where one can spend more on the higher-rated tool, “just in case.”

Taking a closer look at Albion’s high viscosity caulk gun, which has its 26:1 ratio and 900 lbf thrust rating, it says that model is for:

Especially designed to and for comfortable, efficient dispensing of thicker materials (cold weather) and 2-part adhesives packaged in universal or peeler-style cartridges with static mixers.

I’m leaning towards thinking that the Milwaukee M12 caulk gun, and its 400 lb rating, would be sufficient for most caulking or adhesive applications, unless the user knew they would specifically need a higher thrust ratio. Even then, for one-time application, or every now and then, a high viscosity manual caulking tool comes in below the price difference between Milwaukee M12 and Dewalt 20V Max models.