ToolGuyd > Adhesives, Sealants, & Lubes > Recommend a Good Caulk Gun
If you buy something through our links, ToolGuyd might earn an affiliate commission. 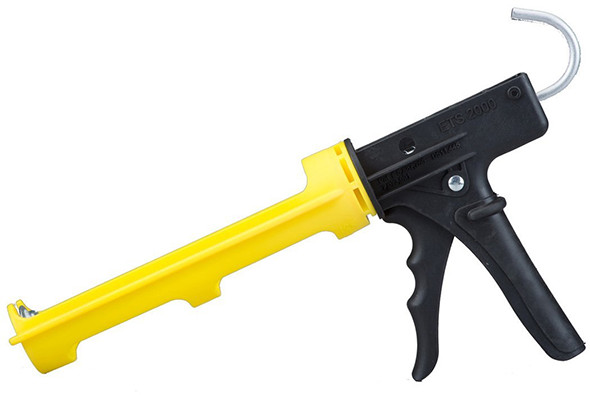 You guys were awesome with your ladder recommendations! Your insights and experiences helped me out, and I’m sure they will benefit ToolGuyd readers now and in the future as well. Now it’s time to talk about caulk guns!

I have a Kobalt caulk gun that I bought a couple of years back because it was cheap. Well, it was inexpensive and cheap. Part of the metal construction broke off. It didn’t affect usability too much, but was annoying enough that it left a lasting memory. Not that the breakage makes a difference now, because I cannot find the darned thing! Maybe it broke further the last time I used it and I threw it away?

I need to do some basic caulking, nothing major, and will probably have to caulk here and there every once in a while after that. Since I can’t find my Kobalt caulk gun, I figured it’s time to buy a new one. So which to choose… ?

At the top of my list is this Dripless ETS2000 composite caulk gun. It’s said to be lightweight, while still being “industrial grade.” Some product descriptions call it professional grade, others say industrial grade. Dripless also makes contractor grade and consumer grade caulk guns, with different options. This looks to be the most expensive of Dripless’ low thrust 10-ounce caulk gun.

It has a 10 ounce capacity and 12:1 thrust ratio, which Dripless says is ideal for use with latex, acrylic, and silicone caulks and similar compounds. Additional features include a spout cutter, hanging hook, extra long clean-out rod, and revolving frame.

Hopefully the brand name is an indication that Drilless caulk guns drip less than competing models, at least those in the same price bracket.

All that, for $12.50. On the other hand, that’s 2x to 6x more expensive than some of the inexpensive caulk guns you can get at home centers. Yep, you can get a caulk gun for as little as $2.

A Newborn “drip-free” model also appears to be popular, and is a little cheaper too at $10 and change via Amazon, but the Dripless just looks to be more ergonomic and user-friendly to me.

What would you recommend for a general purpose caulk gun? Is there something you would recommend better than that Dripless model?

What would you recommend for a casual user like myself? More frequent users? Daily users?