ToolGuyd > DIY & Home > New to Me: Redi Shade Temporary Pleated Paper Windows Shades
If you buy something through our links, ToolGuyd might earn an affiliate commission. 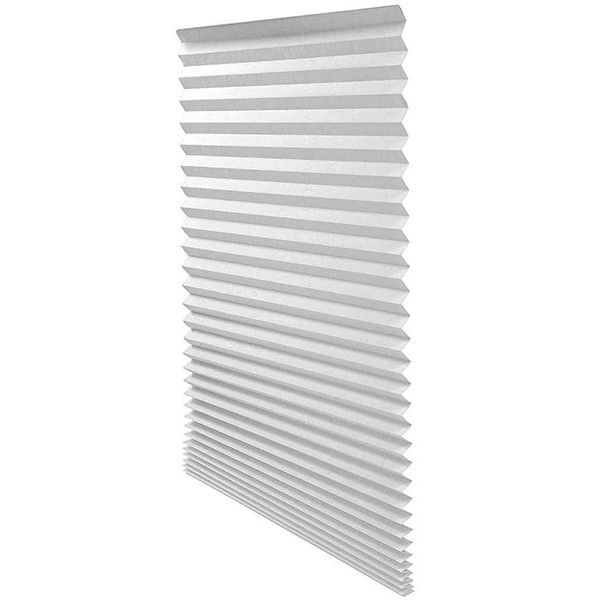 We just moved into a new home, and recently had some painting done prior to move-in. The contractor and painter asked me if we planned to reuse the window shades, or if we’d buy new ones. I said that we planned on replacing all of the curtains and window shades.

There are some shades in a closet and in a corner of the garage, but for the most part they’re all gone. Which is what we wanted.

But now we’re moving in, and with everything on our plate, we have not yet arranged for new shades.

What to do? White flat bedding sheets and painter’s tape? But then we learned about Redi Shade’s temporary pleated paper shades.

Well, no, that’s not entirely true. Redi Shade was not our first discovery. I asked my wife to look into Ikea’s window shades, thinking maybe that their roller shades would be economical enough to install for a few weeks or months until we figure out what we wanted to do.

She found that Ikea makes window shades for as low as $3 each! They stick to the top of a window frame, and can be fixed in place with clips. For full extension, you could Velcro them to the bottom of the frame.

After she told me this, I was all set to head over to the local Ikea, but I did a quick Google search and discovered that other brands also make temporary window shades that work in the same way.

Redi Shade seemed to be popular, and had decent reviews, so I headed out to the local home center and bought a couple of 6 packs of their white shades, for just under $20 each. It came down to around $3 per shade.

Cutting each down to size takes a minute or so maybe less, and that includes measuring by eyeball.

I used a standard retractable utility knife to cut each shade mostly down to size, and some sharp Milwaukee scissors to cut the rest of the way and through the adhesive strip. I’m sure that if I popped a fresh blade into my utility knife, the scissors might not have been fully necessary.

What worked for me was making a pass or two with blade, folding the cut section over, and repeating the sequence. This helped prevent the creation of little slivers cuts that need to be cleaned up.

Oh, and do be careful with those Milwaukee scissors, they are sharp and powerful. I cut through a too-thick portion of paper, and while it worked well, I also happened to nick a small part of my left palm. This might have been the first time I’d been bit by scissors. How embarrassing!

Some of the downstairs windows were perfectly matched by the shades’ 36″ widths, which helped speed things up further. Installing these shades is almost too easy when you don’t have to cut them down to size.

Overall, I’m quite pleased with how the shades turned out. We stuck them to the inside top of most windows’ frames, and the outside of the dining room windows.

We were prepared to do some creative flat sheet butchering, but it seems highly unnecessary when you can get something better for cheaper.

We don’t plan to keep them up for very long, but I’ll be sure to update this post in case we experience any snags, such as fallen-off shades. We stuck the adhesive strip to the inside of the frame, and so they should be easily removed without peeling off any paint.

Redi Shade makes their shades in a couple of colors and lengths.

Buy Now(via Amazon, but you might get better pricing locally)