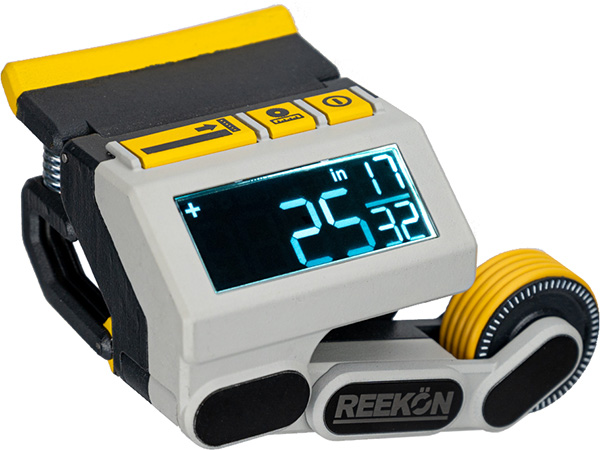 The Reekon M1 Caliber is a clamp-on accessory for your miter saw, and it will measure any flat surface or building material that can fit underneath. This means flat stock, but also pipes and tubes.

We’ve known about the M1 Caliber for some time, and I’ve been very eager to get my hands on one, but time constraints and a tendency to worry about prototypes (both in terms of damaging them and whether functionality is indicative of final production quality) got in the way of that.

Not to mince words, this looks like a must-have accessory.

Lasers and LED shadow lights are reasonably accurate when it comes to setting up cut lines on a miter saw, but precision can vary a bit. Plus, you first have to measure and mark up all of your stock. This can get repetitive when you have a lot of material to cut, or complex if you have lots of different measurements to keep track of.

Stop blocks allow for quick measurements and easy repeatability, but require a lot of space in your workshop. 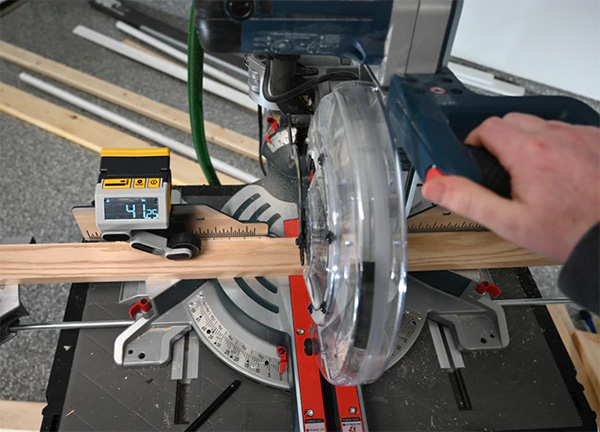 The Reekon M1 Caliber basically clamps to your miter saw fence and its wheel tells you how much linear material passes by. It’s similar to how measuring wheels work, like this Komelon.

Reekon says that it’s up to 110% faster than conventional measuring methods, compatible with most miter and chop saws, durable for the toughest jobsites, and versatile – capable of aiding almost any kind of cut.

It can make straight cuts, mitered cuts, and beveled cuts.

There’s a backlit LED display, allowing the screen to be visible in different lighting conditions.

Measurements can be made in imperial (inches and feet) and metric (centimeters and millimeters) units, and a one-touch zero button can adjust for the thickness of whatever blade you are using. 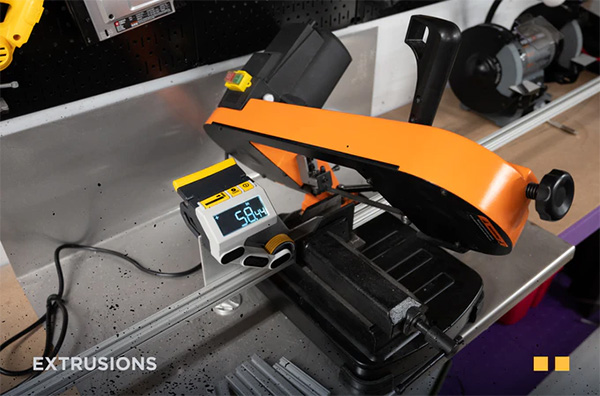 Beyond miter saws, the M1 Caliber can also clamp onto the fences of chop saws or horizontal band saws. 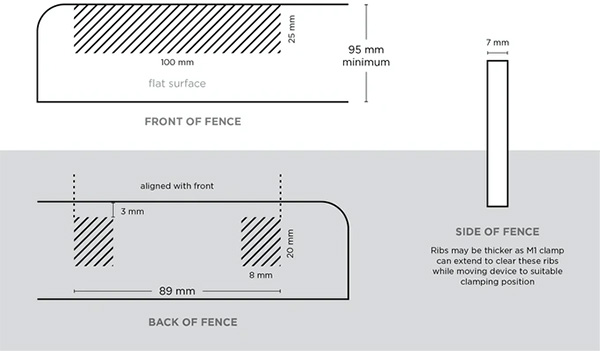 And if your fence isn’t large enough – it requires certain size for proper clamping – not to fret, they make an adapter plate to remedy that.

There is a catch.

Reekon says that severely twisted, bent, or warped dimensional lumber could result in measurement inaccuracies. You will want to ensure your stock is flat, otherwise the measuring wheel could build up a measurement error over longer spans. If it helps, visualize the difference in distance traveled for a car that drives over a hill compared to one that takes the tunnel through.

Some people gang-cut lumber boards to help increase precision, others build elaborate miter saw cutting stations with long tables and stop blocks. This is just a small accessory that you simply clamp to the fence of your saw.

NOTE: Kickstarter is a fundraising program. You’re technically not buying the item, but funding (backing) the project with a pledge in exchange for the promise of one of these tools as a reward.

Here’s a video that demonstrates how it works:

The Reekon M1 Caliber is made in the USA with precision imported hardware.

Personally, I can’t wait to get my hands on one. I’m in line to receive a test sample, and barring any unforeseen issues, I anticipate buying one at retail. I can’t imagine any reason why this wouldn’t be incredibly indispensable.

The Kickstarter campaign offers enough savings that you’ll want to weigh the pros and cons between buying one via fundraising campaign or at retail once the tool officially launches in a few months.

I have had a lot of time to think about what the M1 Caliber offers, and every time I used a miter saw for a couple of cuts, I wished I had been able to say yes to the opportunity to vet one of the prototype.

This is one of the few “it’ll change how you work forever!” types of tools that I believe will actually deliver on its promises. It has a precision measuring wheel, a straightforward and flexible mounting clamp, and simple user interface with a large and clear display.

Aside from being less ideal for use with very rough or uneven lumber or other materials, what’s the downside.

Hmm, what about the wheel wearing out over time?

Components have been thoroughly tested for robustness with many of them field-replaceable increasing device lifetime and making it simple and easy to keep running all the time.

Are there any other hesitations? Seems like a well-thought-out design with practical benefits and reasonable price.