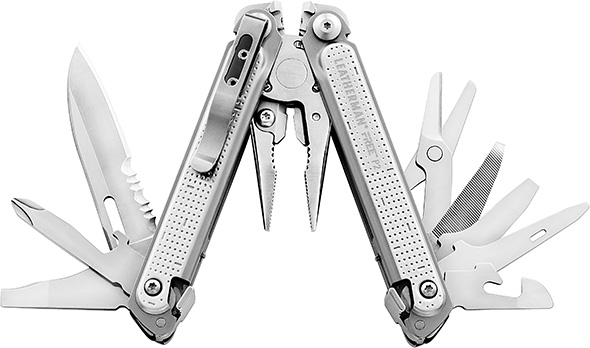 The Leatherman FREE multi-tools are HERE! Thanks to our friends at Leatherman, I’ve got one in my hands, the Free P2, and although I’m not ready for a full review, I have some early impressions I wanted to share.

First up, this is a premium multi-tool. The Leatherman Free P2 currently retails for twice what I paid for my Leatherman Wave multi-tool 12 years ago. If you’re shopping for your first multi-tool, $120 for the P2 is going to be hard to justify.

For the same money, you could alternatively buy the Leatherman Surge ($120 at Amazon), one of the largest and most featured multi-tools that Leatherman makes.

So what’s so special about the Leatherman Free multi-tool that it can command such a price?

To start, Leatherman says that they built the Free multi-tools from the ground up. Everything has been redesigned to “make it the toughest, most durable multi-tool ever.”

But, the main feature is the “magnetic architecture,” and the tools are also designed to be easier to open, with new “frustration free tool access.” 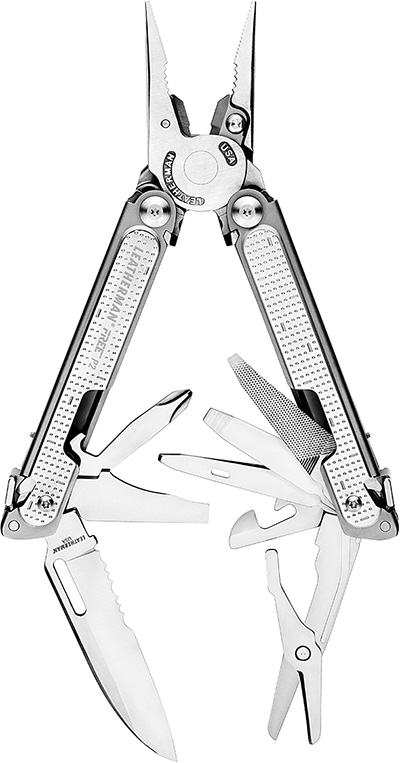 Leatherman used “epic haptics” to describe the opening and closing of the tool. And it really is amazing to open and close.

A magnet holds the two handles closed. When you want to fold the pliers open, you break that connection and swing the handles around. When the handles are nearly in position, a little pressure springs the lock into place and the pliers are open and ready to use.

Closing the pliers is equally as satisfying.

Standard Leatherman multi-tools, which I’ve been using for more than a decade, aren’t at all difficult to open and close, but there’s a different feel to them. Some of my Leatherman EDC multi-tools took some time to feel broken in.

But the Leatherman Free P2 multi-tool, it feels like perfectly broken in, from Day 1.

Compared to the Leatherman Wave, the Free P2 pliers are slightly wider. The finer grooves on the tips of the Leatherman Free P2 jaws are a little coarser, but still what I’d consider fine. The Free also has replaceable cutter blades, similar to their premium tools and recently updated Leatherman Wave Plus and TTi Plus multi-tools.

The Free P2 is longer than the Wave, but a little slimmer. It’s a similar length to the Surge, but is a lot slimmer than that multi-tool.

I’ve been trying out both the new sheath and belt clip. The belt clip implementation is excellent, and better executed than on Leatherman’s fuller-size multi-tools like the Wave. While not as slim as the clip on the Skeletool, the Free P2’s clip is removable.

The Free P2 is smooth and comfortable to use, both in terms of the actual motions of deploying and closing the tools, and in its use.

There is one downside to the Free P2 multi-tool’s design, and it’s that I have found the knife blade to require two hands to open. Leatherman says that it has one-hand operable features, but I can’t flip that knife open with just my thumb, I need my other hand to do it.

Update: I can open the knife one-handed, but it’s not a smooth or fluid motion, and I have to be very careful of where I engage the finger groove. So, it doesn’t exactly require two-handed opening, but it’s not as effortless as with my other Leatherman multi-tools. On a positive note, the blade lock seems to be very strong.

That’s not terrible, and I wouldn’t consider it a deal-breaker. To me, the awesomeness of the pliers is a bigger and better selling point than the two-handed knife opening a detractor.

It’s still a whole lot better than having to open the multi-tool to access the knife blade via a nail nick, which is how some other multi-tools are designed.

As for the “other” tools, meaning all other functions aside for the knife and scissors, which both have “big tool” opening tabs, they are indeed easier to open. One tool was stuck at first, but I remedied that by using a penny instead of my thumb to pivot it open.

To open them, you push on the short end of the tools, behind their pivot. Then, select the one you want, and fold it outwards.

Although I can’t quite open the knife with one hand, I can select and open the Phillips screwdriver with just one hand, which is amazing if you’re used to most other multi-tools and their clumped-together tools.

All of The Leatherman Free multi-tool’s tools lock into place, and are easily unlocked. I figured out the lock on the first try, and the muscle-memory followed naturally as well.

There’s a lot going for Leatherman’s new Free multi-tools. The pliers are AMAZING. The knife? Acceptable. The tools open and close far easily than on most other multi-tools.

It’s difficult to describe how the Free multi-tool feels, but it’s very satisfying to open and close the pliers. They snap into place, and unsnap to close. I found myself opening and closing the pliers over the course of this post, much more than I needed to.

Overall, the newest Leatherman multi-tool feels good to open, and it’s comfortable to use. The tools themselves are very good, but I’ve come to expect that from Leatherman. The Phillips #2 perhaps deserves recognition for being usable, but that’s been true before.

I really like it. The main improvements here are in the way the tool can be opened and used. If you want the same tools and functionality, there are less expensive options. With the Leatherman Free multi-tools, the premium is for the refined user experience.

Here is my preview of the Leatherman Free multi-tools. A more detailed review of the P2 will be forthcoming. Also, of course please let me know if you have any questions.

The success of the Leatherman Charge TTi and other $100+ multi-tools shows that there is definitely market demand for higher-priced offerings, for EDC and regular use.

The Free multi-tools are priced at a premium, but with these tools you get an improved user experience for the added cost. With some of Leatherman’s other premium-priced multi-tools, the extra cost gives you more tools, special handle materials or otherwise enhanced aesthetics, more premium blade steel, or a combination of things.

As far as I am aware, Leatherman has introduced the Free series of multi-tools alongside their existing offerings, and so you can still buy their other styles if you prefer those designs. 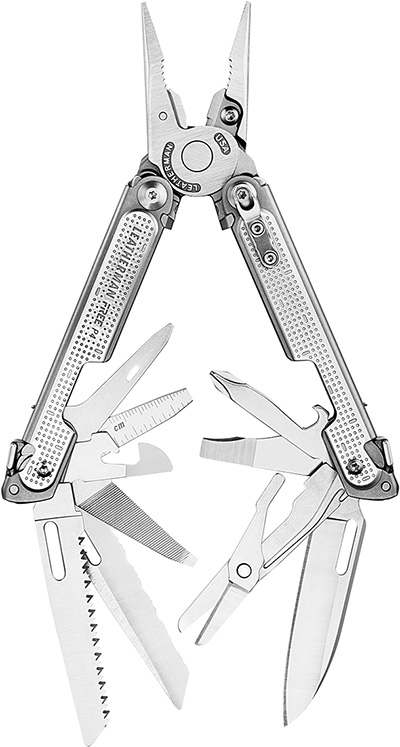 Stepping up to the Free P4 multi-tool, you get more tools – two knife blades instead of one combination edged blade, and a saw in addition to the scissors. This adds an ounce to the P4’s weight (8.6 oz vs. 7.6), and likely makes it a little thicker.

Update: The P4 has a removable lanyard loop where the P2’s pocket clip goes. If you want the pocket clip, they’re available as an optional accessory purchase.

A combination blade is going to be okay for occasional use, but for frequent use, a lot of users might prefer having a plain edge blade and separate serrated knife. Or, if you don’t want to spend more for a thicker and slightly heavier P4 over the P2, you could do as some multi-tool users do, and carry a separate folding knife as part of your EDC.

If you want the saw, the P4 will be the way to go.

Thank you to Leatherman for providing the review sample.