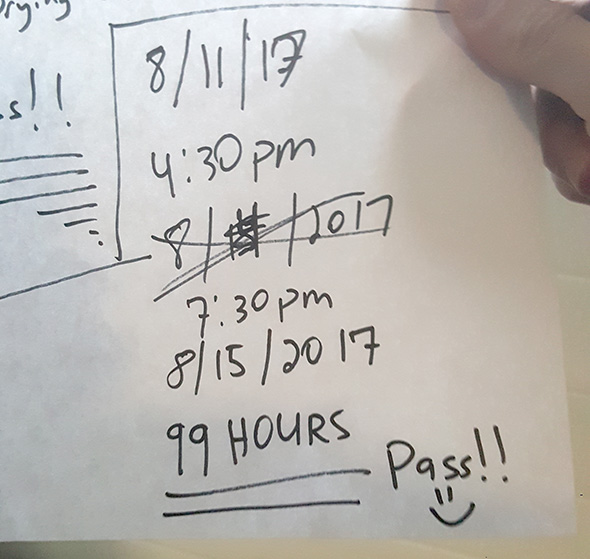 Last week I posted: What happens if you leave a RevMark marker uncapped for 4 days. I started on 8/2, checked the marker on 8/4, and then 8/6, to see if the ink had dried out.

I called this a 4-day test.

One person, – yes just one – pointed out the flaw in this test. If I’m writing with the marker after 48 hours, and then again after another 48 hours, that doesn’t make it a 96 hour test, that makes it two 48-hour tests in a row.

Thank you to BFLContracting for the message on Instagram!

This was a big *doh* moment for me. I raced to uncap a marker to see if RevMark’s “our marker won’t dry out if left uncapped for 72 hours” claim, but didn’t think long or hard enough about my methodology.

I hadn’t considered exactly what I was testing, which was to see if the ink in the tip would dry out and render the marker non-functional.

So I repeated the test. I left the marker uncapped for 99 hours, and it passed again.

The slightly imperfect lines seem to be because I’m drawing long lines rapidly, but normal writing results in dark and fully saturated markings.

It’s possible that leaving the marker uncapped for over 4 days has resulted in some impaired writing quality, but none that I can see.

If you leave a marker uncapped for 4 days and it can do anything at all, that’s a win. I’d accept some diminished quality, but in this case it doesn’t seem like I have to.

Did anyone or even everyone else miss that my proclaimed 4-day test was really (2) 2-day tests, and decided not to speak up? Or did my confidence in the test and results lead you to accept the results without question?

Maybe I didn’t explain how I tested the marker well enough?

I started off on 8/2/2017, taking a new RevMark marker and writing the day and time on some inkjet paper. I left the marker uncapped at the rear of the garage, near the door.

I had planned to check in on it everyday, but I forgot about it. I checked in on it on the 4th, and it wrote the same as on Day 1.

I remembered about it again last night, the 6th, so I went and gave it a quick test. Some scribbles and a little writing later, and there’s no sign of any drying out.

The image also shows that I wrote with the marker in the middle of what was supposed to be a 4-day test.

Did writing with the marker after 2 days interrupt the test by a measurable amount? I can’t say, because I just don’t know. But that’s why the test shouldn’t have been interrupted by my writing a 2-day status timestamp.

In any case, this same marker has now been uncapped a whole lot – (2) consecutive 48-hour tests, and then (1) 99-hour test. It’s suffice to say – these markers’ tips are certainly not quick to dry out.

What Happens if You Leave a RevMark Marker Uncapped for 4 Days?