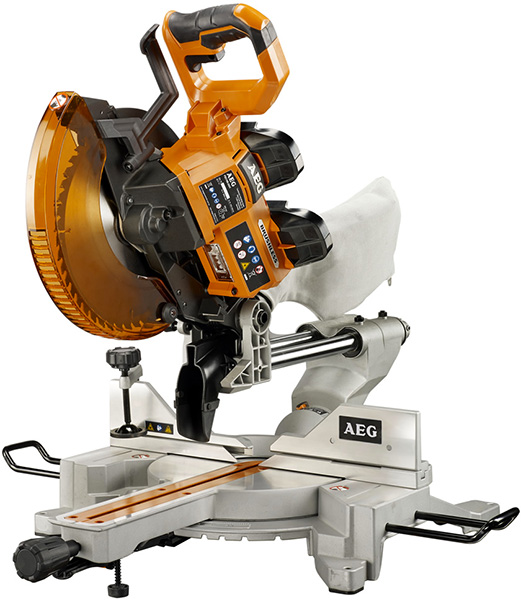 Shown here is an AEG 18V 2-battery brushless 10″ sliding miter saw. It looks like a Ridgid cordless miter saw, but it’s NOT a Ridgid product, at least not yet (to my knowledge).

The AEG saw was announced late last year, but there has not been any word about a Ridgid version, at least from what I’ve seen. If you’ve seen otherwise, please let me know!

It was mentioned in the comments section of Ben’s post about the new Milwaukee cordless heat gun.

The AEG saw features a 2-battery interface, but the interesting part is that it doesn’t require the use of 2 battery packs.

Using 2 battery packs contribute to greater power and longer runtime, but it can be operated with just a single battery pack. Festool has done something similar, with a 2-battery cordless saw that can run in “tortoise mode” with 1 battery, or “hare mode” with 2.

What I’m thinking is that there’s one current limit for when a single battery is connected, and that more power can be drawn when two batteries are connected.

Here is a promo video by AEG:

I’ve seen nothing of a Ridgid 18V brushless 2-battery sliding miter saw like this one by AEG. Some but not all AEG cordless power tools are brought to the USA and Home Depot under the Ridgid brand.

Maybe I haven’t been looking in the right places? Maybe someone made the assumption and called this a Ridgid product in social media?

I think the idea is a great one. One battery for convenience, two for added power and runtime.

Users are going to want to use this with 2 battery packs by default. Given its price tag, $649 AUS (~$492 USD), it would be silly to try to save money by only pairing it with one battery pack.

What I find interesting is that the new Ryobi One+One 2-battery cordless miter saw operates at 36V, and it requires 2 batteries. So why did TTI do things differently on this AEG model? Not that I’m complaining!

Will it come to the Ridgid 18V lineup? Maybe. I don’t see why not, but the same has been true for AEG tools that were slow to come to the USA market under Ridgid branding, and some that weren’t sold here at all.

What happens could potentially depend on whether Home Depot wants to buy it. Because remember, Home Depot is the exclusive retailer for Ridgid 18V cordless power tools, and as such they’re the sole customer here. Home Depot has to buy it before they can sell it to their customers.

Is this something you would buy, and at what price point?