ToolGuyd > Power Tools > Grinders & Sanders > Deal: Ridgid Angle Grinder 2-Pack
If you buy something through our links, ToolGuyd might earn an affiliate commission. 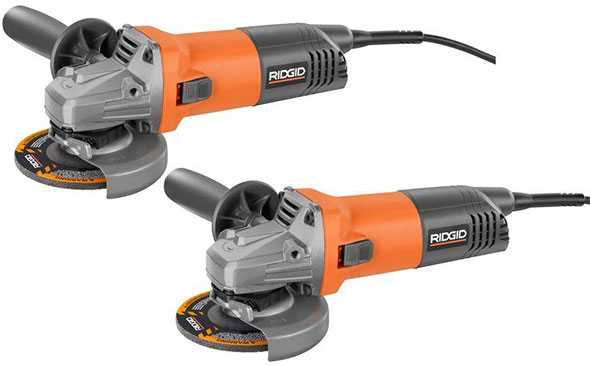 Zachary wrote in about a new Ridgid angle grinder deal at Home Depot:

I was in Home Depot today and saw that they are now selling a combo pack of two 4.5″ Ridgid angle grinders for $79. Thought it might be a good thing to mention.

I saw the same deal online, but was on the fence about whether it was worth posting about. On one hand, two grinders could be useful. You could equip each one with a different grinding wheel or accessory, and quickly switch between grinders rather than having to switch accessories back and forth. On the other hand, some users would benefit more from buying a better grinder, or a single grinder and some quality consumables.

These grinders are engineered with 8A motors and spin at 11,000 RPM. They’re equipped with a slide switch and spindle lock for easier wheel changes.

When I shop for corded or cordless angle grinders, I make sure that there’s a Type 1 guard either included in the package or available as an optional accessory. While all grinding wheels and discs can fail, thinner ones can fail more spectacularly, hence the need for greater guard coverage. Type 1 guards also prevent users from applying loads against the surface of cut-off wheels, as they’re not intended to be used in such a manner.

This combo bundle looks like it could be a good deal for anyone in the market for 2 basic angle grinders, and those who don’t intend to use them with cut-off wheels. Other brands occasionally have similar promo bundles, such as Bosch.