ToolGuyd > Power Tools > Cordless > Ridgid 18V Compact Cordless Brushless Router
If you buy something through our links, ToolGuyd might earn an affiliate commission. 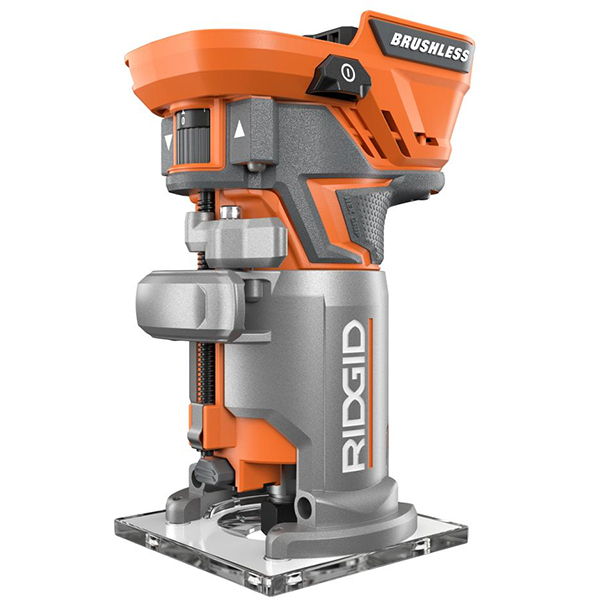 Shawn wrote in, asking about the new Ridgid 18V brushless compact router, R86044B. Others have mentioned it in comments, and I think someone mentioned it on the ToolGuyd Forum as well.

He wrote: I think this hit the shelves in Sep 2016, so it’s pretty new. This router has a brushless motor, and I think many would be interested if this was a capable cordless trim router.

Yes, it’s a new model, and I’ve seen it online but not in any local stores yet. A test sample is supposedly enroute, and so I’ve been avoiding others’ reviews to ensure I’m not biased or influenced in any way.

I didn’t want to post about it before I had an opportunity to see the new Ridgid cordless router in person, for one main reason:

Why haven’t professional power tool brands come out with cordless routers sooner? This leads to so many questions, none of which I can answer definitively yet.

See More: Cordless Routers, Why or Why Not?

Ryobi used to make a cordless router, and apparently they came out with a new one that looks exactly the same, but in a more modern Ryobi fluorescent green color scheme.

The new Ridgid cordless router looks good on paper, but sometimes that’s not hard to do. But how well does it work in real-world applications?

According to Ridgid, it can cut up to 400 feet of laminate per charge when powered by a 5Ah battery pack. Is that cut laminate, or trim? Is that for a minor edge round-over where it barely kisses an edge, or a deeper profile cut? 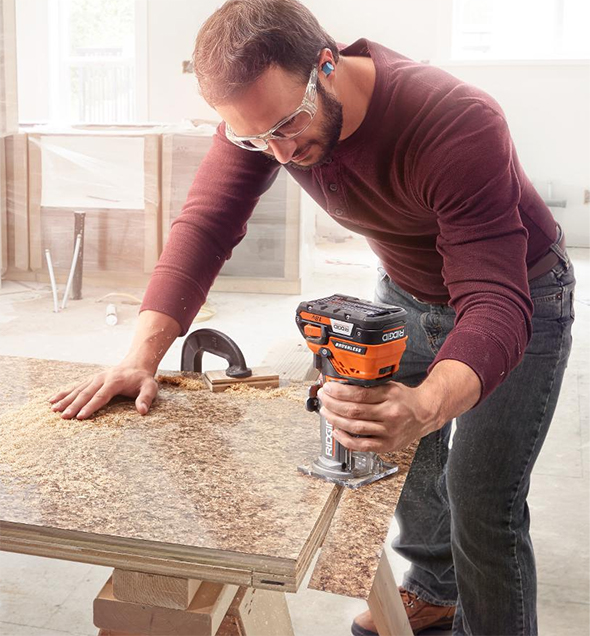 It looks like this is a trim router, meant for light flush laminate-trimming use. Which is okay, but how well does it fair when pushed harder?

What about balance? Comfort? Control?

To me, it looks like the router becomes very chunky at the top, which could be detrimental for control. And the last thing you want is a router that’s not easy to control and guide.

All these questions aside, I guess I’m optimistic. I’ve had great experiences with Ridgid tools – ones I’ve purchased and ones I’ve received for testing and review. But there are too many questions and hesitations. If I were considering purchasing this for personal use, I’d wait a while longer to let others be the guinea pigs.

So although optimistic, let’s call it guarded optimism.

This might just be the best cordless router on the market, and that wouldn’t be hard to do, seeing as how there’s only one competing model I know of, and it’s made by the same company to serve users looking for a lower price point.

Why haven’t we seen anything like this from Dewalt? Milwaukee? Porter Cable? Bosch? Bosch, with their super popular Colt series of palm routers – wouldn’t they have come out with a cordless laminate, trim, or compact router if such a tool was practical?

As a side note, has anyone ever seen the new Bosch Colt router we posted about last year? It looks to me like it never launched, or hasn’t launched yet. Weird.

Then again, Ridgid does make some different woodworking tools, such as their oscillating belt and spindle sander. So maybe it’s in their nature to take risks like this. Or to provide a cordless router solution even if this isn’t the best tool to give cordless treatment to. Or maybe they fine-tuned the heck out of the design to create a fantastic compact cordless router right from the start.

If you’re just trimming some laminate, you don’t need a very powerful tool, and you could probably expect decent runtime. But with tools like this, the power and capability demands can jump up very quickly.

Let’s say you want to cut some grooves, dadoes, rabbets, roundovers, chamfers, or more complex profiles. If this Ridgid brushless compact router is designed for trimming laminate, how well will it satisfy users’ more demanding needs?

Obviously there’s a limit as to how a compact router with 1/4″ collet can and should be used. But does that line move when there’s a battery pack feeding the tool instead of an AC power cord?

The lead-in for this post, in case you didn’t come here from the ToolGuyd homepage or newsletter, says: Ridgid has come out with a new compact brushless router. But what can it do? I really do mean that as a question. What can it do? And also, what can’t it do? I really don’t know yet. I’m hesitant and optimistic at the same time.

If anyone has tried this out already, I’d love to hear your thoughts! Or if this is something you’ve been waiting for, how likely are you to buy it? How would you use it?