ToolGuyd > Power Tools > Cordless > Ridgid Fuego & X4 18V Compact Li-Ion Drills and Drivers Have the Ooh-Ahh Factor
If you buy something through our links, ToolGuyd might earn an affiliate commission. 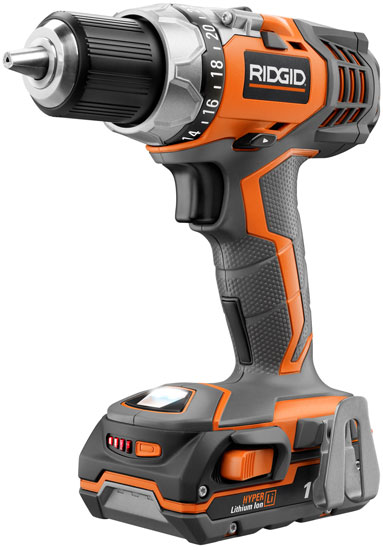 If looks were everything, Ridgid’s new Fuego and X4 18V Hyper Li-ion drills and drivers (compact, hammer, impact) would trump their competitors’ tools in a heartbeat. After coming across Lowes’ new Kobalt cordless power tools, I wondered about the compact drill/driver that Kobalt compares to their own in their display banner. I wasn’t really looking for it during my following trip to Home Depot, but as I walked through the aisles the snappy-looking R86008K  drill caught my eye.

I am almost embarrassed to say this, but the design of Ridgid’s new Fuego cordless drill made me stop, stare, and go “oooh” for a good few seconds. Despite being a much more compact model, the drill itself does not look too different from the previous generation compact drill, at least at first sight. Still, there are noticeable ergonomic changes, more grey textured grip material here and there, a new work light design, and an overall smaller feel. The new battery looks to have been redesigned both functionally and cosmetically.

Featuring Ridgid’s Hyper-Lith technology, the new batteries are said to have the best run time, recharges (?), and “extreme weather performance.” The batteries have a new power gauge indicator, and overall they look like Ridgid design engineers went out on a mission to create the sexiest tool batteries on the market. When paired with the X4 drills and drivers, the batteries help create a complete and powerful look. 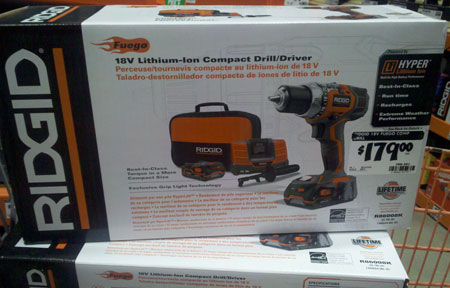 Although it was the R86008K drill’s looks that initially got my attention, its specs and features kept my focus and I made a mental note to pay much more attention to the X4 line in coming weeks. The drill features a 2-speed gearbox with no-load speeds of 0-450 and 0-1650 RPM, and can deliver a maximum 455 in. lbs. of torque with its 1/2″ single-sleeve ratcheting chuck. Charging time for the included compact Hyper Lithium Ion batteries are listed as 20mins via Home Depot’s product page and 25mins via Ridgid’s info page, but we’re happy with either one.

A few years back when many guys scoffed at Hitachi’s “weird alieny” green grip design, I swore that tool appearances couldn’t sway me. While I wouldn’t think my stance has changed much, it is evident that I am not invulnerable to aesthetically pleasing tools. If tools like these can stop me in my paces, they’ll probably have the same effect on others. It’s a good thing that Ridgid built in solid hardware that back up the tools’ good looks, making them very dangerous to their competitors these days.

We’ll be reviewing at least one of these tools, to make sure that they’ve got the brains and brawn to match their striking good looks.