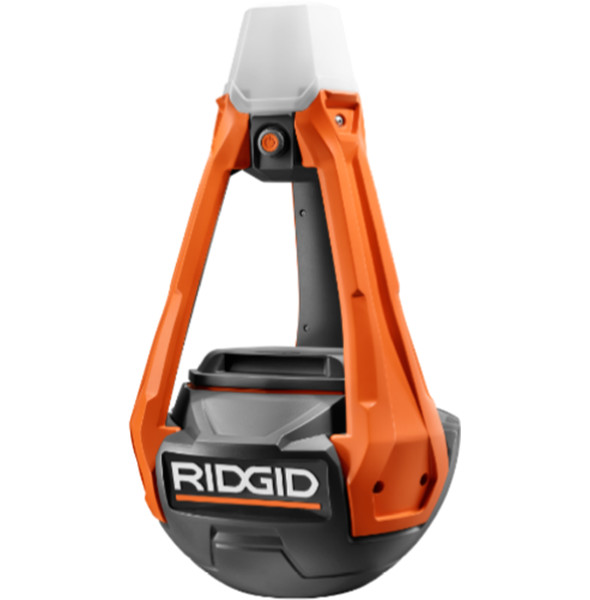 Ridgid has come out with a Wobble-style upright LED area light, R8694820B. It can deliver up to 1,000 lumens in all directions, and can be powered by an 18V Li-ion battery pack or a standard extension cord.

What makes the base Wobble-style? It’s weighted with a strong bias at the very bottom of the base, the sides are curved. Give it a push, and the light will always try to right itself to a perfectly vertical position. Unlike a tripod worklight, this one can’t be accidentally knocked to the ground.

The power compartment is actually pretty neat. It’s covered by a hatch, to keep dirt and debris out, and a second hatch inside that exposes the AC extension cord plug.

I have a large 14-gauge extension cord, and was worried that the guides on the side of the power compartment hatch were too small, but everything snapped into place nicely.

I’m new to this style of area light, but was surprised that the light feels light enough to carry with one hand, but is heavy and stable enough to successfully withstand any kind of hit or knock that would send other lights to the floor.

The base is flat, and so it returns to a stable position rather quickly. 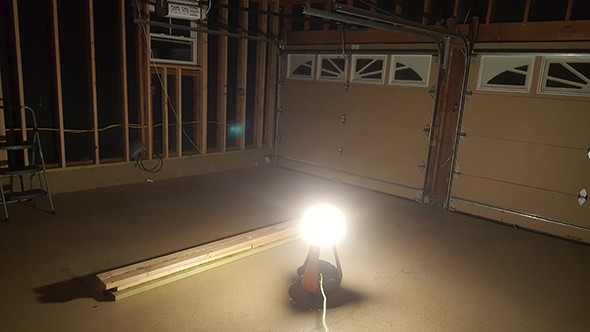 Here’s what it looks like in the middle of an unlit garage.

It doesn’t quite light up the entire room very brightly, but spreads illumination pretty evenly in all directions as promised.

Ridgid says that a 5Ah battery will power the hybrid upright area light for up to 75 hours at the lowest brightness setting. This is a good place to mention it – the worklight has a pushbutton knob that turns to control brightness.

While it won’t illuminate an entire garage by itself, the upright area light can do a great job in closer spaces. It also projects upwards very, very well. 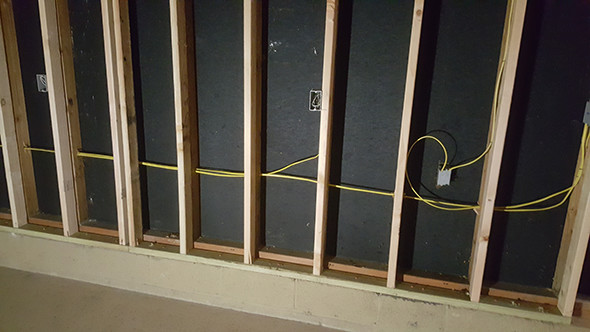 This image, of a bare wall being illuminated by the Ridgid upright area light positioned in the center of the room, appears brighter photogrpahically than it appeared in person. What I wanted to show was how widespread and even the illumination is. 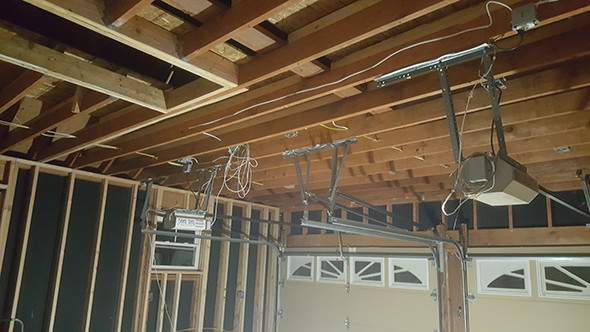 As mentioned, it’s bright enough to light up the ceiling.

You can wrap your power cord around the base of the unit. I haven’t checked to see how long of a cord I can fit around it, but it seems that my 25-foot cord shouldn’t be an issue.

The new Ridgid light works best close to where you’re working. I imagine that you could use it in a larger workspace too, you’d just have to move it around a little or put several units to use.

I’ve only begun testing and using the Ridgid upright area light, so feel free to ask plenty of questions and offer test scenario suggestions. I’ve never used a Wobble Light or anything similar, and so it’s new to me.

My favorite aspect so far would have to be how well it can illuminate a higher-up work zone.

I suppose the brightness controls might come in handy, but I’d rather have seen an adjustable diffuser that can focus more light in one direction, turning the light spread from 360° to 180°.

The $99 price surprises me. For the quality of light, sturdy construction, and dual power options, I’d have expected it to cost more.

While this is still on my test bench, what else would you like to know about it?

Thank you to Ridgid for providing the test sample unconditionally.