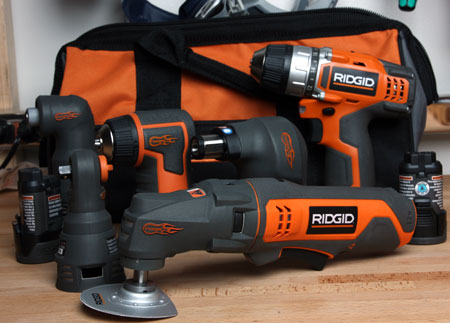 Ridgid’s JobMax modular tool system, shown above, has grown a little long in the tooth. I had great experiences with the Ridgid JobMax tools that I had tested and used. They released some nice attachments over the years, and broadened the types of base handles, but not much has happened in recent years.

The JobMax system deserves recognition for trying to cater towards so many different types of users. There’s an 18V base handle, a 12V Max base handle, a corded base handle, and even a pneumatic one. Being able to power different tool attachments using 2 different cordless platforms, AC, or air-powered motors is quite the accomplishment.

But Ridgid hadn’t done anything with the JobMax system in a while. The motors haven’t been updated and there are no recent new tools.

One of my attachments doesn’t fit base handles very well anymore, likely due to a drop that caused a noticeable dent near the attachment ring.

To keep up with the times, Ridgid would really need to overhaul the base handle, and also update their battery pack capacities. I’d like to see 2.0Ah as standard, with 2.5ah and higher capacity 4.0Ah options.

As you might have guessed from the title and commentary about the JobMax system, Ridgid is planning something, and it’s going to be BIG.

We don’t have a lot of information yet, but I was too excited to keep this all to myself.

Ridgid is coming out with a new modular tool system, MegaMax. I’m waiting on more information, but here’s what I know so far:

Confirmed: Ridgid MegaMax will be an 18V modular tool system that’s said to be more robust than the JobMax system.

Might we see 18V brushed motor, AC, and pneumatic base handle options? What about a brushless motor?! Oooh, imagine that – it would certainly be somewhat of a game-changer in the modular tool market. As an aside, the “modular tool market” only has 2 players – Ridgid and Black & Decker. I suppose Craftsman can also still be considered a player, but many of their Bolt-On tools and attachments can be found as Black & Decker Matrix products.

There are a few modular drill/drivers, such as Bosch’s FlexiClick, but I digress.

Here are some of the things the trademark application says about Ridgid MegaMax:

While we wait on more information, let’s hear what you might want to see Ridgid come out with as part of their MegaMax modular tool lineup.

To me, “more robust” means heavier duty. Ridgid has had 8 years of cordless power tool tech to integrate into their new MegaMax tools. I can’t see how a new system wouldn’t be heavier duty. But keep in mind that “heavier duty” is my claim, not Ridgid’s.

Plus, the JobMax tools seem to have been designed as 12V Max tools and then expanded to include other options, including 18V. Part of the very limited information I was able to squeeze out from my source, was that MegMax will be an 18V system.