ToolGuyd > Compressors, Air Tools, Nailers > Ridgid Portable Compressor – Quick to Tempt, Hard to Find!
If you buy something through our links, ToolGuyd might earn an affiliate commission. 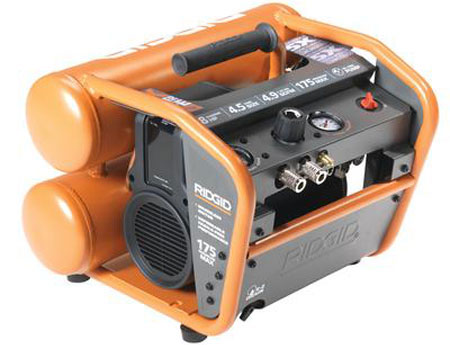 Many Ridgid power tools are so well designed that I sometimes wonder why they’re not more popular than they are. Ridgid’s 4.5 gallon twin stacked compressor is a great example of how Ridgid’s tools are often underhyped. This compressor had so many great features – from the beautifully well spaced control panel, to the easy-access drain valve, high quality couplers, and thick rubber anti-vibration feet.

A bit over two months ago, one of our Craftsman compressors had failed, and I volunteered to unpack and set up the Ridgid compressor that a colleague had picked up at Home Depot. My first observation was that this unit was very sturdy for its size – heavy, but sturdy. Then, of course, I admired the control panel, EZ Drain (bottom left on the front), and couplers as I connected the compressor to our equipment. Almost immediately after I hooked everything up, I decided that this would be the model that I would replace my personal 2 gallon compressor with in the future.

The compressor felt solid (even with the motor running), was almost a pleasure to operate, and provided much more airflow than I had anticipated, especially given its (relatively) low price. The compressor was a bit difficult to lug around, though, given the one-handed handle grip. However, this is not too much to worry about since the compressor will almost never be repositioned. 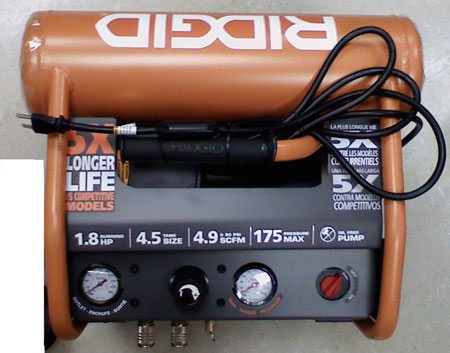 We shot the photo from above so that the sales specs would be easily readable.

I have used several Ridgid nailers before,  but this was my first experience with a Ridgid compressor. Unfortunately, it seems that this compressor is difficult to find. The old version (OF45150) is featured on Ridgid’s website, but the new version (OF45175) is only found via Home Depot’s Canadian site. Campbell Hausfeld is the manufacturer, but I cannot find anything similar in their lineup! I suppose that the positive take on this is that Ridgid does not simply rebadge OEM tools and products – they redesign/improve them as well.

I was still very impressed, and will definitely give Ridgid’s lineup serious consideration for my future air compression needs, at least if they keep their act together. During a recent trip to Home Depot, their only Ridgid offering was a lightweight compressor/toolbox/hose+reel/two nailer combo set – probably heavily stocked and marketed for the winter holiday shopping season.