ToolGuyd > Compressors, Air Tools, Nailers > New Ridgid and Ryobi Vertical Pancake Air Compressors
If you buy something through our links, ToolGuyd might earn an affiliate commission. 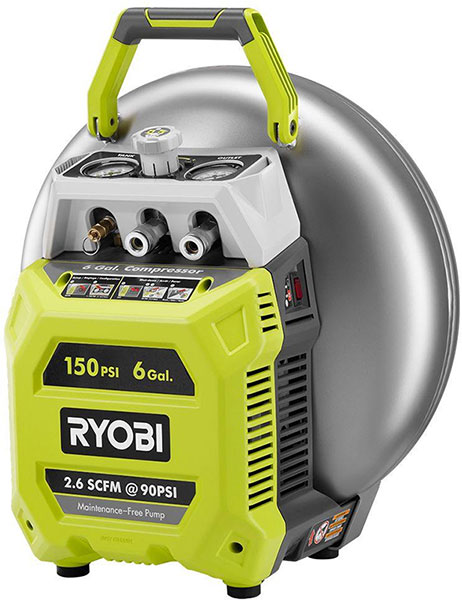 Apparently, there’s an identical Ridgid version as well (OF60150VP). Both seem to have the same features and specs, but the Ridgid is currently listed as a “special buy” and is available for a bit less. 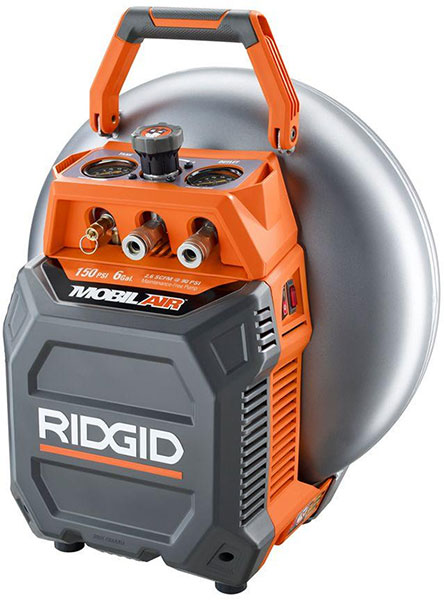 This makes sense, as Ridgid and Ryobi’s North American power tool endeavors are both operated by TTI.

In addition to its smaller footprint, the vertical pancake configuration provides an “improved” center of gravity for easy portability. That’s a fancy way of saying that it’s more comfortable to carry. 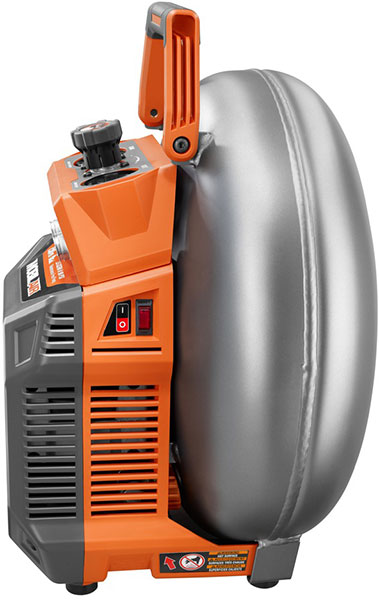 According to a Ridgid promo video, embedded below, that compressor will “only be available for a limited time.” Maybe the Ryobi version is a permanent edition while the Ridgid is priced low for the holidays?

There are a couple of other features that stand out to make these air compressors even more interesting, such as hooks for hanging your air nailers, and hose-routing channels on the underside of the compressor that help to prevent tip-overs. Apparently there’s also replaceable air filter.

Update: The Ridgid dropped in price to $126.

The price difference is a bit strange, as both compressors look to be identical, as far as on-paper features and specs are concerned.

I’m really digging the design. As someone who often has to lug bulky and unbalanced tools around, I like that these vertical pancake compressors were designed to be easy to carry. The smaller footprint is an added bonus, and the interesting features are frosting on the cake.

If I were in the market for a new compact air compressor, I would strongly look at these models. My first choice would be the Ridgid, given its better pricing, but if it truly is a “limited time” product, then I would consider the Ryobi.

My only gripe with be that neither Ridgid nor Ryobi really came up with a better way to describe these as vertical pancake compressors. It seems like this was a missed opportunity for really funky branding, as with Ryobi’s Airstrike nailers and Ridgid’s JobMax modular tools.