ToolGuyd > Hand Tools > Plumbing > Ridgid Telescoping Basin Wrench with LED Light
If you buy something through our links, ToolGuyd might earn an affiliate commission. 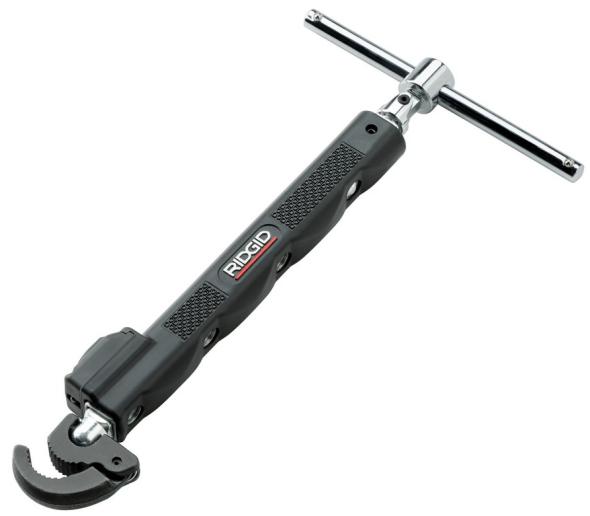 The classic use of a basin wrench is to reach behind a sink to connect or disconnect the water supply hoses to a faucet. Ridgid has come out with a new style of basin wrench (model no. 46753) that should make this and similar tasks even easier. 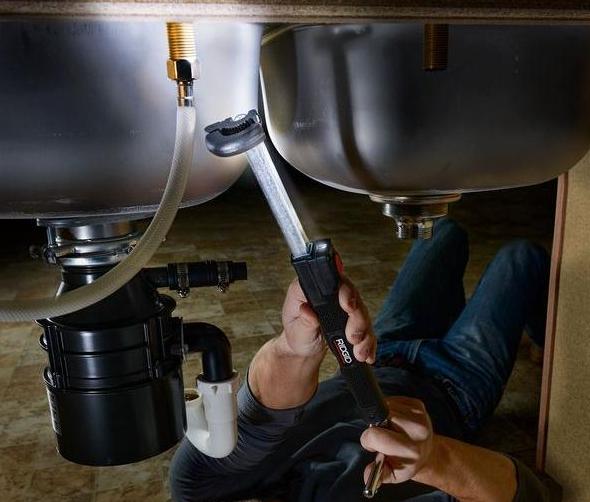 The water-resistant LED is aimed at the business end of the wrench, so you can see the nut you’re trying to tighten or loosen. Neither Ridgid nor the retailers state it explicitly, but one user review says the LED has both a low and high mode. It’ll automatically shut off after 5 minutes of inactivity so that you don’t drain the batteries if (when) you forget to turn it off. 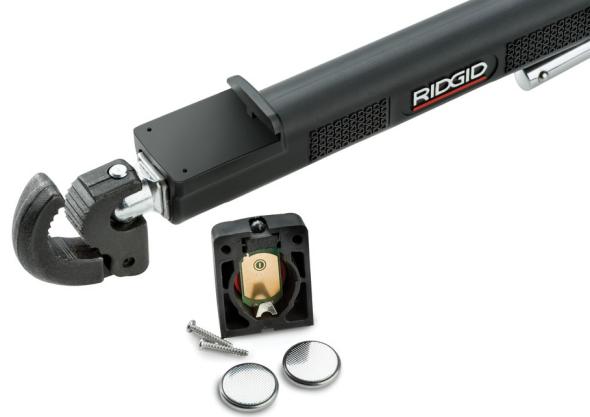 Speaking of batteries, the LEDs are powered by two coin cells that Ridgid doesn’t specify. (If I had to guess which coin cells by looking at the picture, I’d say they were CR2032.) You can access the cells by removing two small screws.

The basin wrench extends from a compact 10″ to long-reach at 17″. The telescoping action is controlled by a ball detent mechanism, with four detents in the body of the wrench corresponding to the four length settings. Jaw capacity is 1/2″ – 1-1/4″.

Ridgid also says the jaw has been upgraded with a heavy-duty, rust-resistant spring and travel limiter to provide a tighter grip and longer lifetime.

The T-handle pivots 180°, which lets you squeeze the wrench into tight places. It also detaches to reveal a 3/8″ drive socket. This allows you connect a breaker bar or larger T-handle for more leverage, or a ratchet for when you don’t have much room to spin the wrench. And, unlike the cold, bare metal body of most other basin wrenches, the body of the Ridgid basin wrench is covered with a softer and more comfortable contoured overmold.

Wouldn’t you know it, the one Big Orange Retailer you think of when you think of Ridgid tools doesn’t have any in stock online, and stores are showing mixed or uncertainty inventory. If you want one from there, you’ll probably have to visit your local store. Online, ToolBarn seems to have a couple in stock. There it’ll cost you $50 with $9 for the cheapest shipping option. Amazon is also listing the basin wrench, but with a long shipping estimate.

Unless you are a plumber, a basin wrench probably isn’t a tool you use every day or even every other month, but when you need one, no other tool will do.

When fred mentioned the Ridgid LED telescoping basin wrench in the recent Milwaukee Pipe Wrenches & Pluming Tools post, I remembered the few times I’ve had to use a basin wrench. Each time I was lying on my back reaching up behind a sink while trying to aim a flashlight with my mouth.

$50 might seem a little expensive for a basin wrench, but the last time I had to use one, I was so frustrated that if somebody would have handed me a tool that would have gotten me out from under the sink faster, I probably would have handed them $50 on the spot. I don’t know that Ridgid’s LED telescoping basin is that tool, but it sure looks better than my basin wrench.

While we normally consider LED-lighted hand tools to be somewhat gimmicky, Ridgid’s LED telescoping basin wrench is one tool where a built-in light really makes sense.