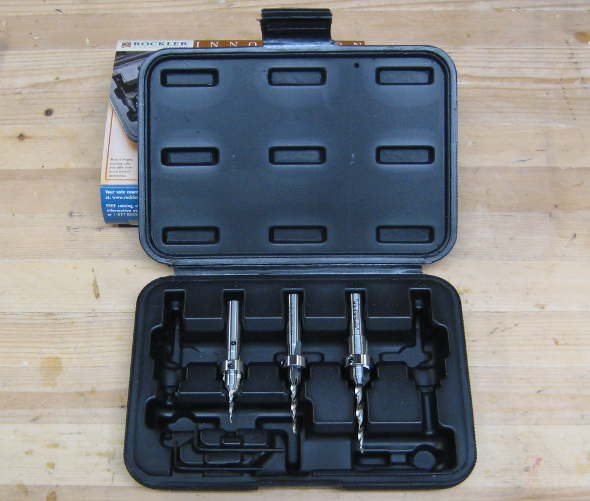 Rockler’s Pro Tapered countersink bits don’t have the specific non-marring stops previously discussed, but look to provide a good balance between functionality and affordability. Rockler was kind enough to supply a 3-piece set for review purposes.

This set comes with #6, #8, and #10 countersinks that all feature beefy 3/8″ shafts. Each countersink comes with a stop collar that allows you to make repeatable holes at a number of depths. You can set the countersink depth to be just shallow enough only recess a flathead screw flush with the surface, or deep enough to accommodate a screw-hiding plug. 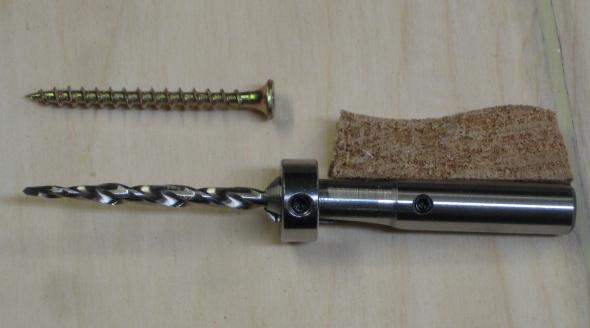 You can adjust both the drilling depth and stop collar height with a single size hex wrench, of which they include two, presumably because you are going to lose one. The set comes with a molded case that provides storage for the included countersinks plus room to expand your set with a #5 and #12 countersink. 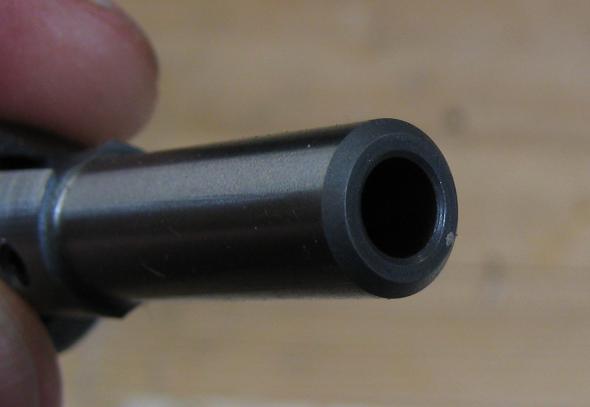 When I first picked up the countersink, it had a good heavy feeling to it, probably due to the 3/8″ shank. As a nice touch, the end of the shank is chamfered inside and out. 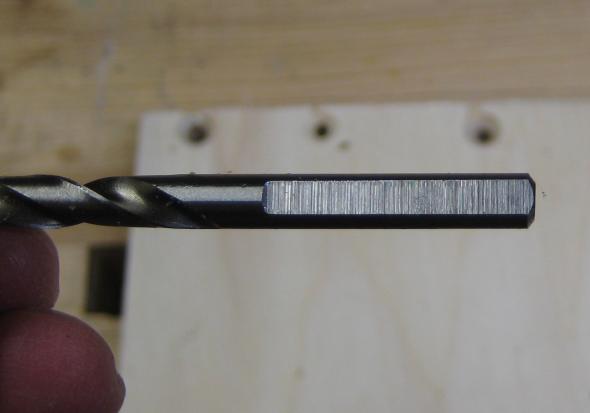 The drill bit itself has a flat ground into it to positively engage with the set screw — it’s not going to slip like many of cheap hex-shanked drill bits do after time. I’m not sure what the collar or the countersink body are made of, but the drills say they are HSS. 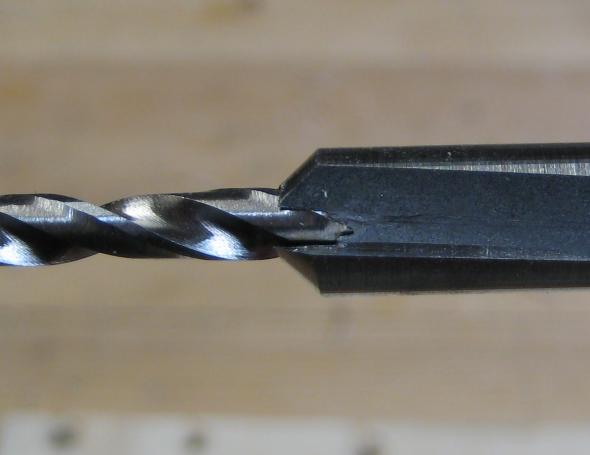 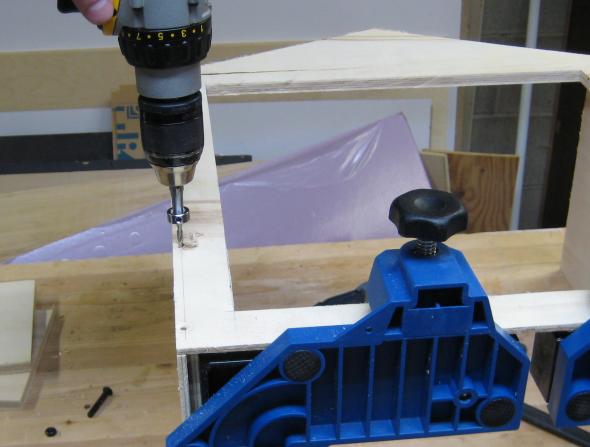 I broke out the #8 countersink to assemble the carcass of the unofficial Little Library my daughter and I are building. Since it’s going to be outside we’re using #8 1-5/8″ stainless steel screws. I like using these for outdoor projects because I’ve pulled them out of projects I’ve left outside for years and the screws are in such good condition I can use them again.

I cut out all the pieces from 1/2″ AC plywood and needed to drill and countersink all the holes so my daughter could glue and screw the project together. I tried driving the first few screws and noticed right away the tapered hole felt different from a straight hole.

As I started driving each screw, they went in really easily. Then about halfway through, I could feel the driver start using more and more torque to drive the screw. 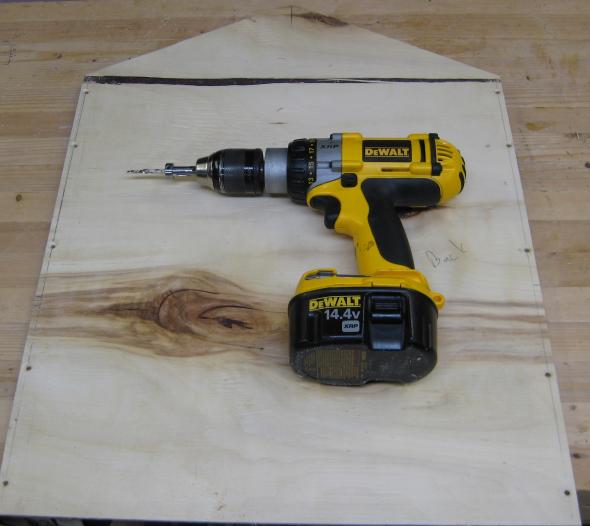 As I was drilling the holes, I noticed the countersink was getting packed with sawdust underneath the depth stop. It wasn’t worried about the depth consistency on this project, but I noticed that I had to sometimes push harder to get the stop to bottom out. 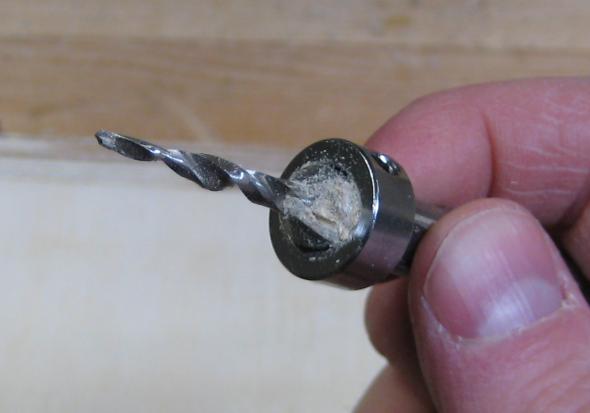 I’ve been working on a lot of reviews recently and my bench is constantly covered by clamps, drills, and other hardware. So last Saturday I decided to build some overhead clamp and drill storage to declutter my work area. It’d also give me a chance to use the #6 countersink. 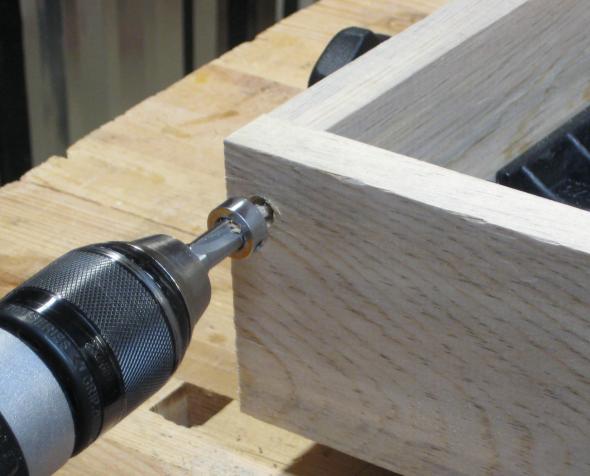 I quickly discovered that if you are between two sizes, it’s better to go down a size as I was stripping out the holes as I drove in the screws. Once I started using the #6 countersink, everything was peachy.

Driving screws into pine, I didn’t notice the change in torque as much as I did in plywood. It makes sense that the plywood would be harder because of the glue between layers. 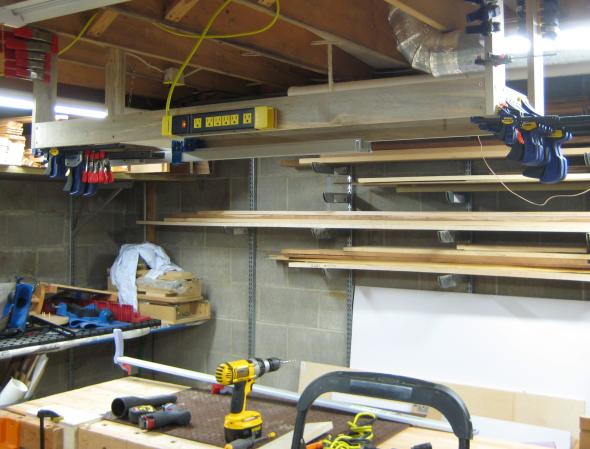 I made quick work of creating the frame and ceiling supports and hung the overhead storage platform above my bench. Even though I’ve only moved over some of my clamps and haven’t cut the plywood for the top shelf, I’m really satisfied with how many clamps I’ll be able to store above my workbench and how easy it’ll be to access them and other frequently used tools.

After I used the countersinks on a few projects, I was bothered that I couldn’t seem to get a consistent countersink depth. At first I thought it was because the countersink got packed with sawdust after a few holes. So I ran a test where I drilled a lot of holes through some scrap plywood without clearing the sawdust from the flutes 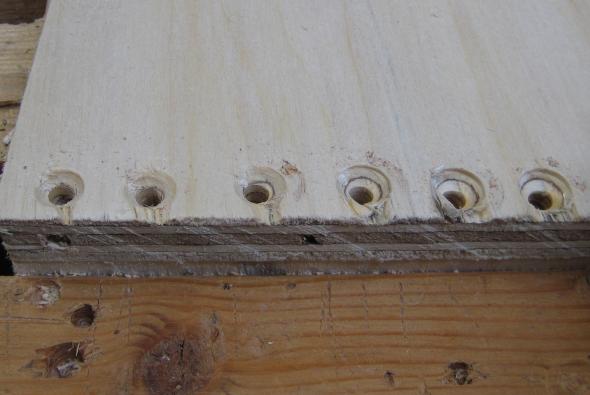 In this test, I found I wasn’t getting consistent depth, not because of the plugged flutes, but because the collar slipped. Part of that was my fault. I wasn’t really cranking down on the two set screws. My experience with set screws this small is that if you tighten them too hard you’ll strip the threads. 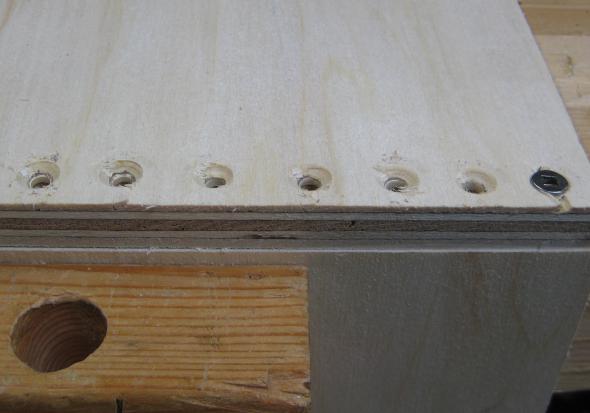 So I cranked down the set screws on the stop collar tighter than I thought I should, and when they didn’t strip, I ran another line of holes without clearing the sawdust. This set was more consistent, but I think this time it was the sawdust limiting the hole depth for some of the holes. 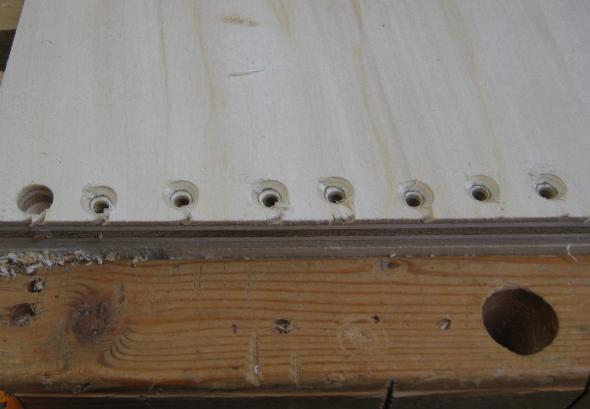 I took off the depth stop and tried to control the depth of the countersink without a stop. Actually it was pretty easy to control the depth by eye. Also I found that without the stop collar the flutes cleared themselves every time. That’s actually why the last hole is so much deeper, I wanted to make sure it could clear the sawdust in a deeper hole. 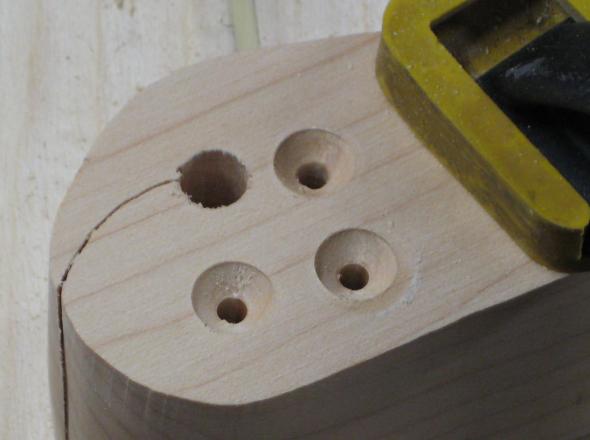 I’d be remiss if I didn’t test these countersinks in hardwood, so I pulled out a piece of hard maple and started drilling holes. The resulting holes and countersinks were very clean. Unfortunately the chip clearing was actually worse with the hard maple; it packed in harder than the pine and the bit was smoking after every hole, despite what Rockler says about tapered bits generating less heat.

I slowed the drill down to the middle speed and drilled a few more holes, and I was then able to drill holes without the smoking.

I’m impressed by the build quality of these countersinks. They are sharp, they can cut into both hardwoods and softwoods well, and they left clean holes — you just need to remember to slow your drilling speed for hardwoods.

I’m not sold that tapered bits are worth it for any other purpose than drilling perfect holes for the old style tapered wood screws.

I’m disappointed in the chip clearing ability with the stop collars in place. It’s like the stop collars were an add on after the bits had been designed. Without them the countersinks clear the sawdust pretty well.

It comes down to this:

If you are buying these countersinks because you want a high quality tool and are confident in your ability to drill repeatable depth holes, go right ahead. If you are buying these bits because you think you need a stop collar to drill repeatable countersunk holes with a hand drill, you might want to think about another design.

This set normally runs $60 at Rockler, but for the holiday season they have it marked down to $50. You can also pick up individual countersinks for $23 and replacement tapered drills for $10.

Thank you Rockler for providing the review sample unconditionally.